An Australian nutritionist has revealed a simple trick to ensure people are getting their daily dose of vitamin D.

Laura Ford, from Melbourne, shared a series of TikTok videos explaining how mushrooms absorb sunlight to produce a ‘usable type’ of vitamin D.

By leaving 100 grams of mushrooms in the sun for at least 15 minutes, it can boost daily vitamin D levels by 100 per cent when consumed.

The clever insight is ideal for office workers who often aren’t exposed to much sunlight during the day. 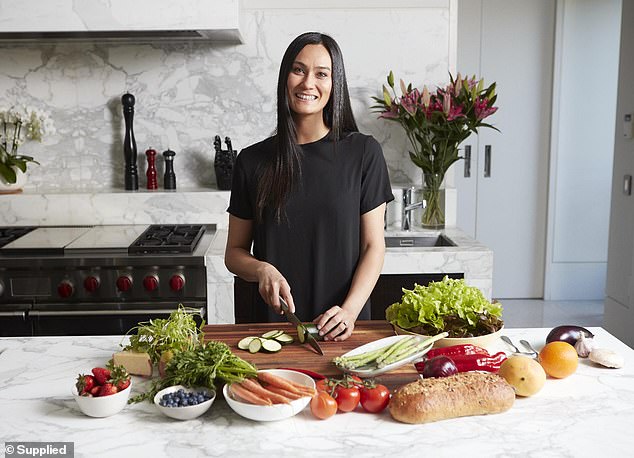 In a TikTok video Laura said when skin is exposed to sunlight vitamin D3 is produced and turns into calcifediol, which can help determine how much of the vitamin is in the body.

Mushrooms are able to use a similar process as they are a fungi and contain a compound called ergosterol that allows the sunlight to be converted into a usable form of vitamin D2.

While plants also produce D2, they convert the sunlight in a different way that cannot benefit humans.

‘Most plant-based sources of vitamin D are D2 [and] are typically not converted into calcifediol so easily – but this is different for UV-exposed mushrooms,’ she said.

Laura’s initial TikTok video has since gone viral been viewed more than 171,000 times.

Ergosterol is converted into vitamin D when exposed to the sun’s ultraviolet (UV) radia­tion, similarly to how human skin synthesises the vitamin in response to sun exposure

The form of vitamin D produced in mush­rooms is D2, unlike the D3 found in the few animal foods that naturally contain the vita­min

After leaving the mushrooms in the sun, they can be refrigerated, cooked or chopped to eat fresh in a salad.

While a few TikTok users questioned whether the information is factual, the science has been explained by experts at both Australian Mushrooms and Berkeley Wellness.

As mushrooms contain the ‘pro-vitamin’ ergosterol, the experts at Berkeley Wellness said this is converted into vitamin D when exposed to UV radiation and ultimately allows the process to occur. 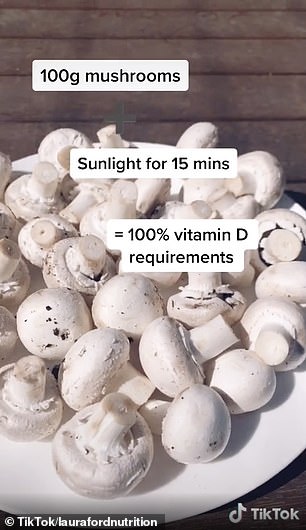 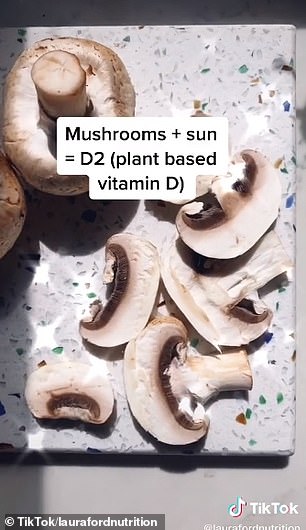 As mushrooms are fungi and not plants, they contain ergosterol (a compound) in the cell walls that helps to convert the sunlight into a useable form of vitamin D2

‘The form of vitamin D produced in mush­rooms is D2, unlike the D3 found in the few animal foods that naturally contain the vita­min,’ the experts said.

‘Over the past decade, sci­entists have found that it takes only a modest amount of UV from the sun or special lamps to produce significant levels of vitamin D in mushrooms.’

After the mushrooms have been exposed to sunlight they retain 90 per cent of the vitamin D even after being stored or cooked.