NIMBY campaigns have helped drive up house prices and rents, a leading economist has argued, as younger Australians are shut out of the market by opposition to high-density developments.

In a speech on Wednesday night, Grattan Institute economic policy director Brendan Coates said soaring house and land values “sit at the heart of some of Australia’s most pressing policy challenges”. 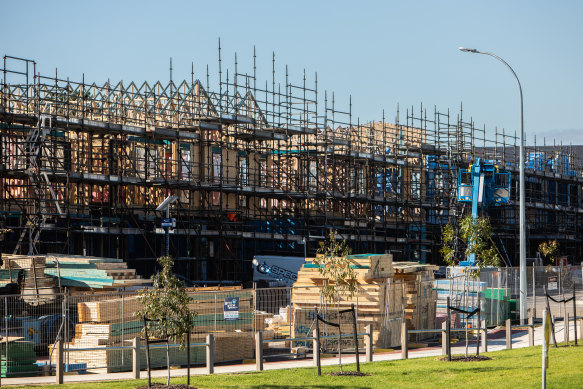 Coates said federal and state governments need to make tough decisions on housing policy to improve affordability as younger Australians struggle to get a foothold in the housing market.

“This is a problem we can fix, but only if we make the right choices.”

House values across the country had swollen to $10.1 trillion by March this year, driven by a record-low official cash rate of 0.1 per cent and aided by government concessions including HomeBuilder grants. While the property markets in NSW and Victoria have taken a $200 billion hit since the Reserve Bank started ratcheting up interest rates to counter high and rising inflation, prices remain above pre-pandemic levels.

One fix Coates proposes is an increase in medium or high-density development to meet demand.

“It is a myth that all new first-home buyers want a quarter-acre block. Many would prefer a townhouse, semi-detached dwelling, or apartment in an inner or middle suburb, rather than a house on the city fringe,” he said.

Zoning restrictions and local opposition to higher-density development is the problem, Coates said, with Reserve Bank research from 2020 estimating that restrictive rules added up to 40 per cent of the price of homes in Melbourne and Sydney.

“The key problem is that many states and local governments restrict medium- and high-density developments to appease local residents concerned about road congestion, parking problems, and damage to neighbourhood character,” he said.

“The politics of land-use planning – what gets built and where – favour those who oppose change. The people who might live in new housing – were it to be built – don’t get a say.”

Heading into the pandemic, this contributed to the lack of available housing with just over 400 homes per 1000 people, which Coates said was “among the least housing stock per adult in the developed world”.

“Less than 1 per cent of rental properties are currently vacant – the lowest level on record,” Coates said. “The typical asking rent on a new property is up nearly 14 per cent nationally over the past year.”

States have responsibility for land-use laws and planning, but Coates said the federal government “can and should help boost the supply of housing”.

“First, the most obvious way the federal government can materially reduce housing demand is by reducing the capital gains tax discount and abolishing negative gearing,” he said.

The government should pay states to build more housing, through targets for new construction and payments for exceeding those targets, but also help strengthen building codes to ensure developments are well-designed.