The Queen has returned. After teasing that something was coming, Nicki Minaj delivered with an entire mixtape and song featuring Drake and Lil’ Wayne!

It’s been two years since Nicki Minaj released new music, and fans were treated to not just a song with Drake and Lil’ Wayne — but a full mixtape, Beam Me Up Scotty. The Young Money trio reunited for “Seeing Green,” which kicked off the project. Unlike seeing red — which is usually associated with negative feelings or jealousy — seeing green suggests a positive, new chapter of growth. Ahead of the drop, Drake appeared on her Instagram live where she revealed he sent her the beat for the song.

“What made you think I would sound good on that?” Nicki asked. “It just didn’t feel right with you not being on it,” Drake, who was walking down a dimly lit street, replied. “That’s the only way I can put it. It was fun the other way, but it’s epic this way,” he added, hinting a third “surprise” person was on the track (Lil’ Wayne). The Toronto native added, “You know we’ve had some real hearts to hearts lately — it’s your world, and no one does this better than you. When you’re gone, we miss the bars and the energy you bring.”

Weezy opened with a verse of his own, reflecting on past years and Pandemic life. “Used to live next door to Drake and Momma Dee/And Lisa Dee on Eagle Street,” Wayne rapped, making a joke about Drake’s Canadian heritage. “And ever since the pandemic/They don’t wanna let Drake out of Canada/I been screamin’, ‘Free Drizzy’,” he added, before passing the baton to his former protegé and frequent collaborator Nicki.

The Queen sounded more confident than ever on the chill track, that was reminiscent of music from the early 2010s. “I am the star in any room that I stand in/I am the stand out/You must the stand in,” she stated, noting that her “big booty” was “sticking out” of her “daisy dukes” and causing a “riot.” She added, “Ain’t no seeing green — but I’m seeing green….it’s corporate giants that went against me/She said she hot, I said b—- come and convince me.”

In the time since putting out “Megatron,” Nicki, 38, has gotten married, given birth to a baby boy, and lent her vocals to one track after another. But, these were other people’s songs – not her own – so to say the Barbz were ready for “Seeing Green” to drop on Friday (May 13) was an understatement. What they weren’t ready for was a full blown mix tape with 23 tracks — and an IG live with Drake that brought back their old flirty vibes. “You know I love when you go off like that,” Drake said at one point as Nicki dropped a freestyle, also mentioning her son “Papa Bear.” Dad drake added, “You know the priorities.” It turns out Drake has been trying to get over to Nicki’s house for the last two weeks (but got called out for ditching several times — including when Nicki was going to cook him a “steak dinner”).

“He singlehandedly got me out of my writers block,” Nicki also said, referring to Drake. “I’m never going to forget it — and I’m going to shout out to the world and the mountain tops. He sent me something and it made me feel so competitive again and I was like…you need to get writing,” she confessed, admitting Drake’s “pep talks” were a huge inspiration for her to get back into music. Drizzy replied, “That’s very sweet.”

Nicki kicked off her comeback on Monday (May 10) by making her first Instagram post since January. “F R I D A Y,” she captioned the shot of her seemingly posing nude with a pair of strategically-placed pink pillows. Nicki didn’t say what was coming Friday, but with her dedicated fanbase, she just could have posted the picture, and they would have been hyped over something (supposedly, the Crocs e-commerce website reportedly crashed, per Footwear News, because so many Barbz were attempting to buy pairs of the similar-looking electric pink clogs she wore in the picture.) Nicki furthered the hype the following day by posting a pair of pictures of her in a psychedelic, multi-colored dress. 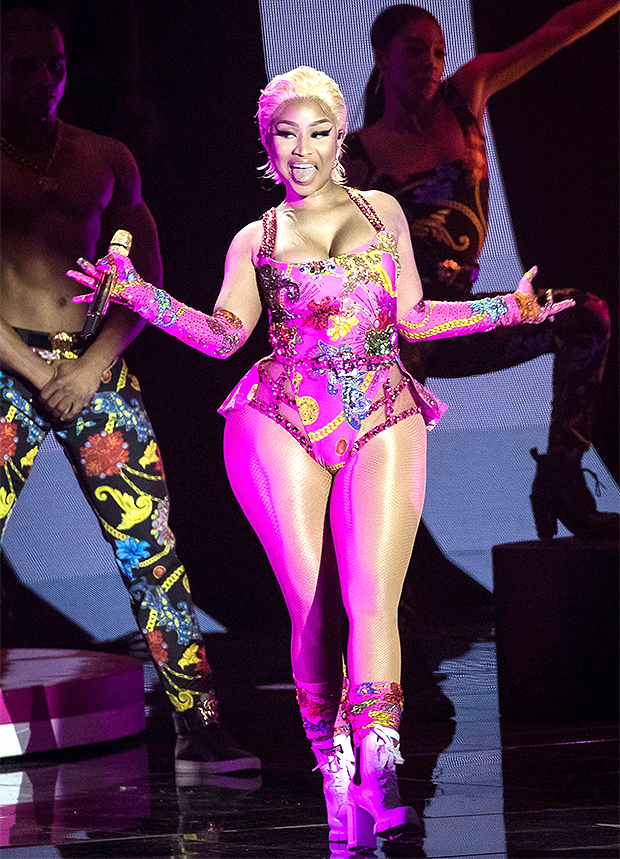 “Btchs act like they want action, heard they want action, btch we aint duckin no action. I’m bout to giv’em dat traction, send a distraction— then ima line’em like FRACTIONS,” Nicki captioned the post, leading many to theorize she was dropping a song called “Fractions.” Nicki didn’t wear Crocs for this photo, but her shoes might have secretly told a bigger story about this new song. In the photo, Nicki was wearing Egg Yolk yellow Stretch sandals by Bottega Veneta, per W magazine. On May 11, Rihanna posted a series of photos of her wearing a white knit dress and … a pair of off-white Bottega Venetta Stretch sandals. At the same time, Rihanna and Nick began following each other on Instagram, the modern sign that they’re friends.

When Nicki posted a video of her and her husband Kenneth Petty pulling up in a luxurious car. The video was meant to show off Nicki’s watch, the RM 07-02 model, aka “The Pink Sapphire,” from Swiss watchmaker Richard Mille, per Complex. “It’s the PINK Richard Milleeeee 4 meeeeeeee,” Nicki wrote. “Only 8 in the world.” Some fans listened to the song that Nicki played as she was driving, and some wondered if they heard Rihanna’s voice on the track. Though, considering how bad and how long the Rihanna Navy has wanted new music from her, it might have just been wishful thinking that both these queens would end their droughts with the same track.

Nicki’s last major release was 2018’s Queen, her first album after 2014’s The Pinkprint. The 19+ track release spawned hits like “Chun-Li,” “Bed,” and “Barbie Dreams.” 2019 also saw Nicki join Megan Thee Stallion for “Hot Girl Summer,” one of Nick’s handful of featured appearances that year. 2020 saw Nicki lend her voice to songs by Doja Cat (“Say So (Remix)”), ASAP FERG (“Move Ya Hips”), Ty Dolla Sign (“Expensive”), Sada Baby (“Whole Lotta Choppas (Remix)”) Mike Will Made-It and YoungBoy Never Broke Again (“What That Speed Bout!?”), and Tekashi 6ix9ine (“TROLLZ”). Some of these songs topped the charts – “TROLLZ,” “Say So” – while others were minor hits. As for this new track, expect it to top the charts by the Barz’ sheer will – and for it to usher in the new era of Nicki Minaj.