A twin saved her sister’s life by sending out distress signals from the womb, prompting doctors to deliver them both early.

Poppy McBride’s heart rate began wavering on the monitor when she was unborn at 31 weeks.

Doctors in Texas then intervened, delivering her and her twin sister, Winnie, early.

But Poppy was fine, with nothing wrong with her heart. It was Winnie who was in trouble – and doctors credit Poppy with saving Winnie’s life. 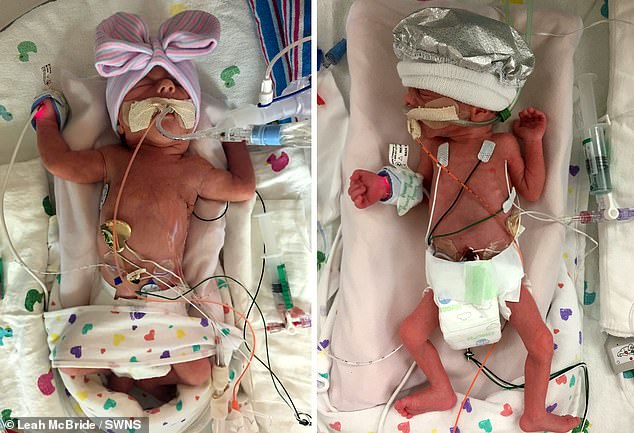 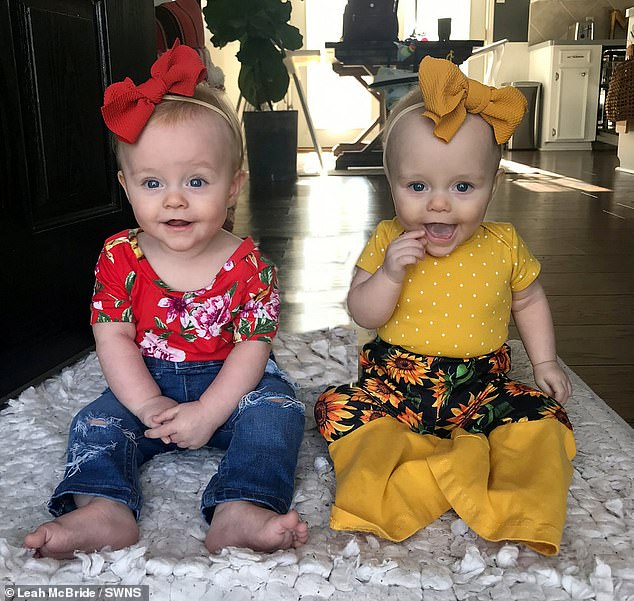 Winnie and Poppy McBride: The twins are now three years old and thriving after their initial scare

Mother Leah McBride, 28, who stays at home with her girls, said: ‘Our doctors told us, “I think your tiny twin saved her sister’s life.”

‘Poppy’s heart rate had been all over the place, so they had to deliver but when she was born, she completely fine.

‘They think she was sending out distress signals because she knew her sister wouldn’t survive if they weren’t delivered then.’

Leah and her husband, Austin, 27, a crane mechanic, found out at 21 weeks that their girls had twin-to-twin transfusion – where there is an imbalance of blood flow that causes one baby to become a donor and the other a recipient of all nutrients.

Despite being told there was an unlikely chance of survival for either baby, Leah had a successful surgery to correct the blood-sharing imbalance.

She then managed to make it to 31 weeks and five days before Poppy sent out the warning signal and both twins were delivered.

Despite being the smaller of the twins at 1lb 11oz, Poppy was perfectly healthy – with nothing wrong with her heart.

It was Winnie – born weighing 3lbs 8oz – who doctors hadn’t been concerned about, who was born with underdeveloped lungs and whisked to the intensive care unit.

Winnie then had to have surgery at 14 days old to relieve a build-up of fluid on her brain before then making a miraculous recovery. 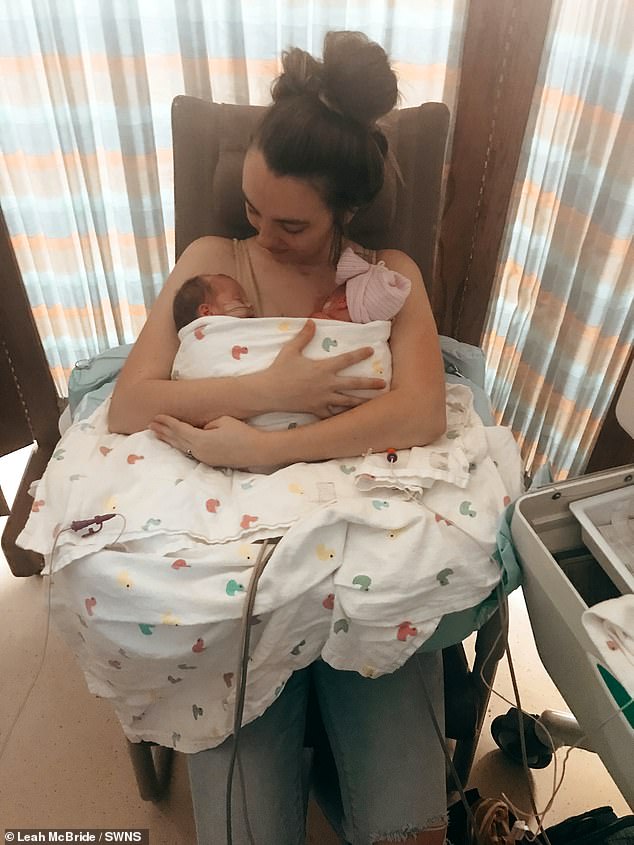 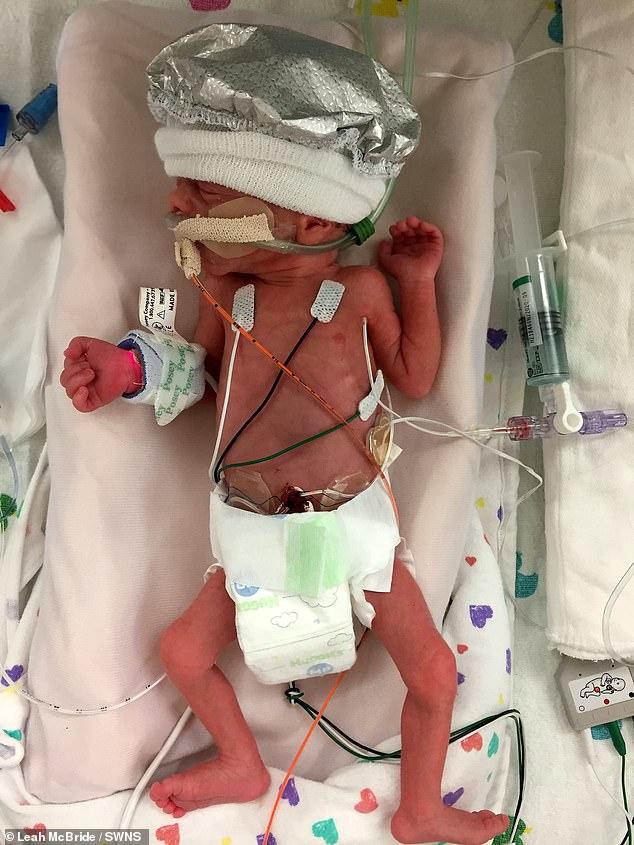 Tiny baby: Despite weighing just 1lb 11oz when she was delivered, Poppy was actually the stronger of the two babies 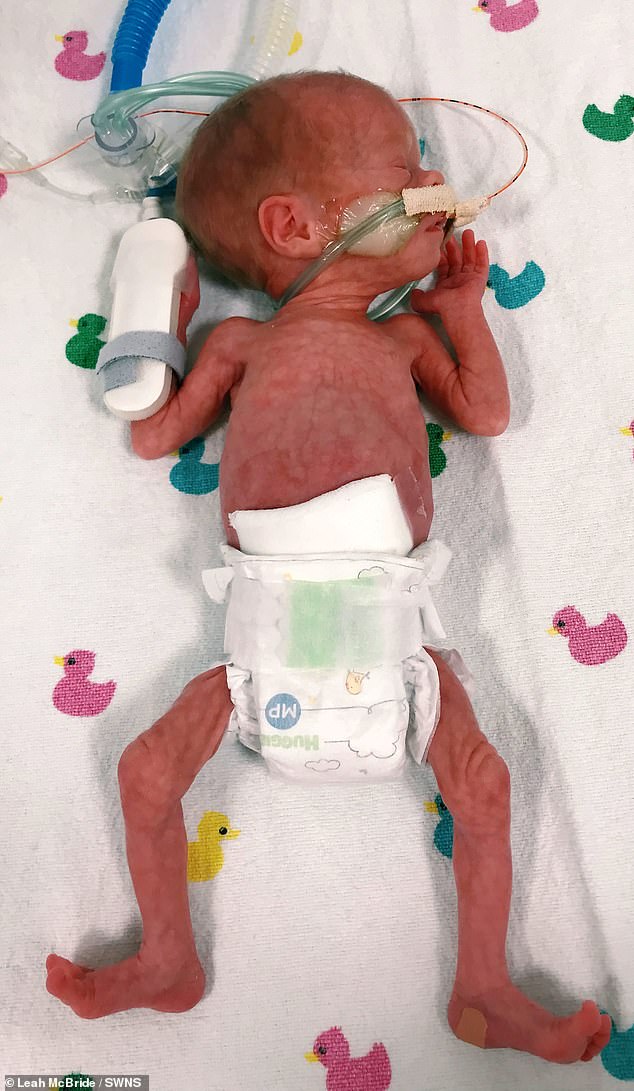 Clever baby: Poppy (pictured) sent out distress signals from the womb so doctors would deliver and rescue her twin sister 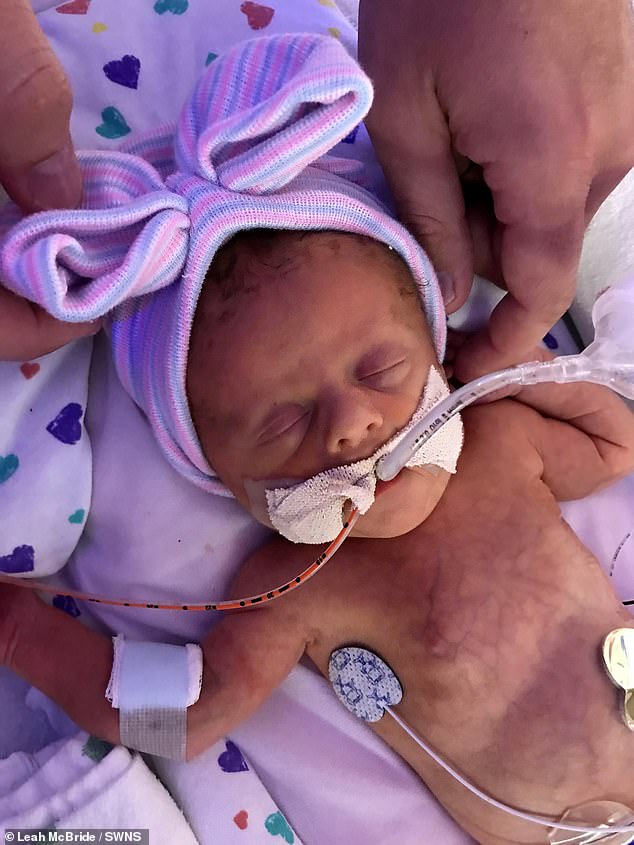 Doctors realised Winnie, pictured here on a ventilator, was in trouble when she was born at 31 weeks 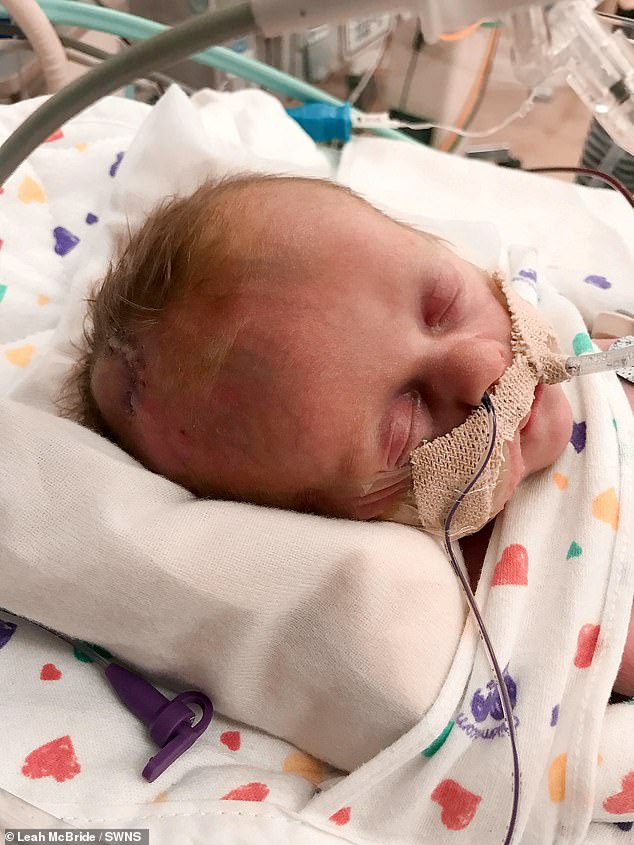 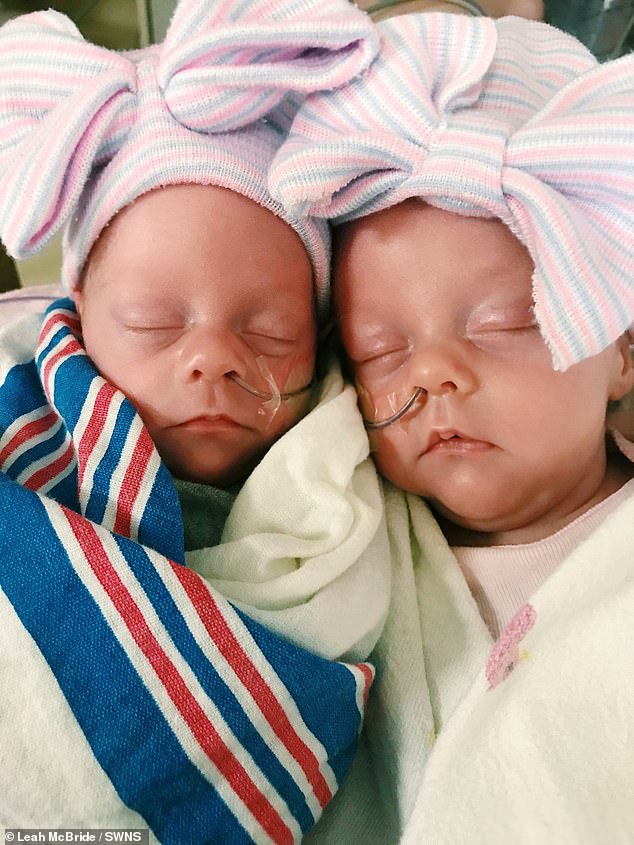 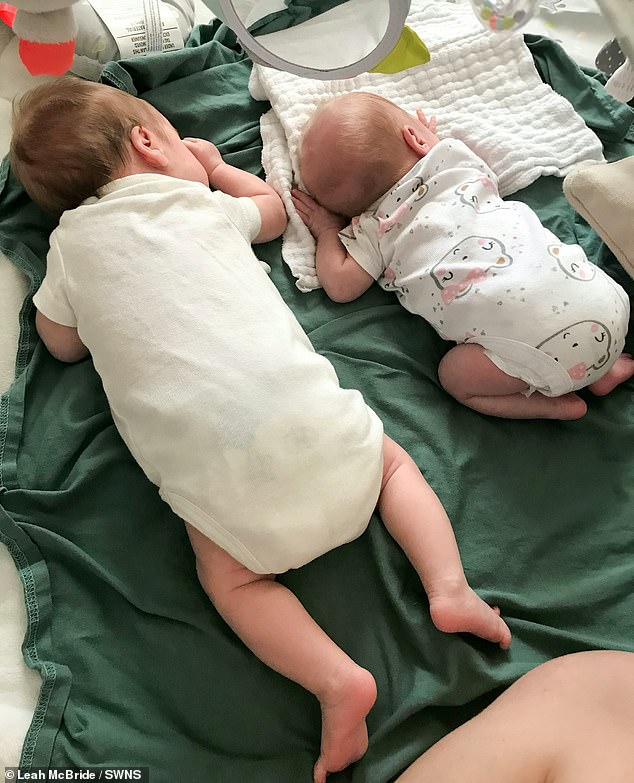 Despite being the smaller of the twins, Poppy was actually fine. It was her bigger sister Winnie that was in trouble

Poppy remained healthy but had to stay in hospital to gain weight before she was able to head home.

Winnie was discharged after 52 days, and Poppy followed two days later and the twins are now the best of friends and thriving.

Leah said: ‘Even now Poppy takes care of Winnie even though Poppy is still much smaller.

‘I love having a big and little. They are so close – it’s sweet.’

It has been a long and emotional journey for the girls’ parents.

Leah and Austin were ecstatic to find out they were expecting twins in January 2019 after a year of trying to conceive.

‘I was really excited,’ Leah added.

The couple then found out they were expecting identical twin girls and had to be closely monitored.

Leah had two ultrasounds every month to check her pregnancy was going smoothly until an in-depth scan at 21 weeks revealed something was wrong.

‘They told me to come back to the doctors first thing the next day,’ Leah said.

‘Of course I was Googling everything that might be wrong and came across twin-to-twin transfusion.

‘The doctor said he could barely see one twin and the other twin was surrounded by so much fluid.’ 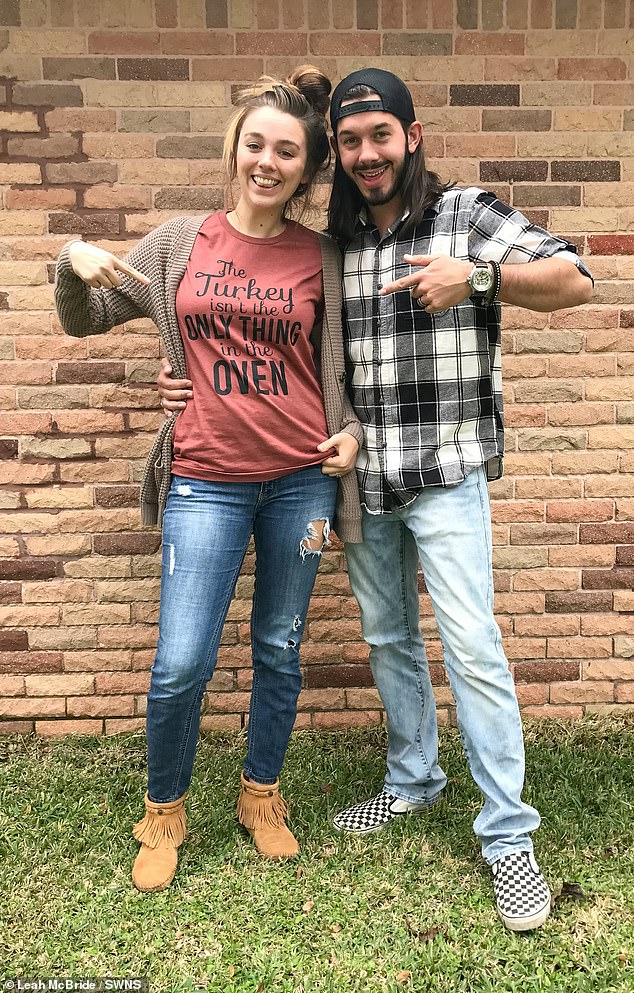 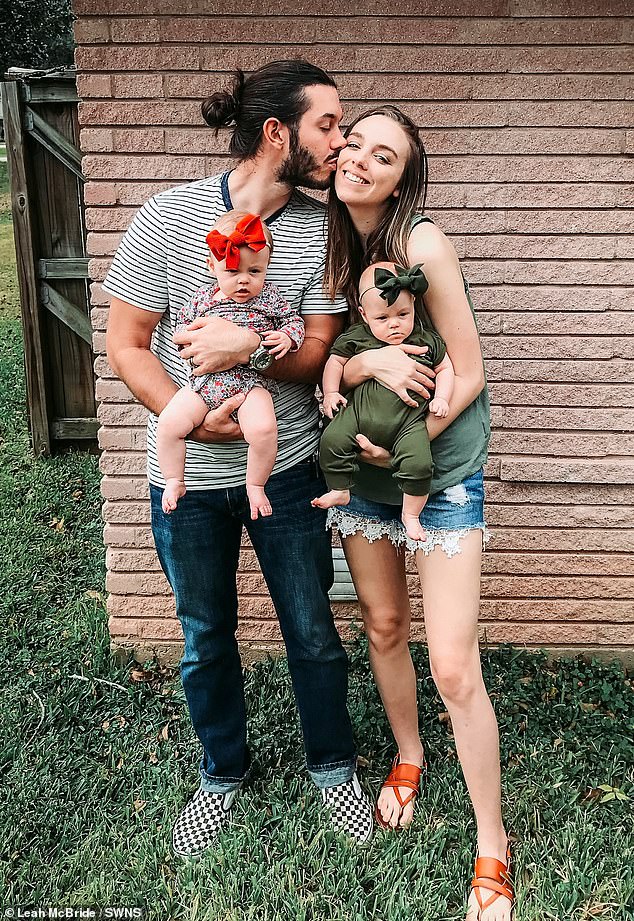 Loved up: Leah and her husband Austin and their twin girls. The family are lucky that both girls survived

Leah as diagnosed with stage three twin-to-twin transfusion syndrome and advised to terminate baby B – Poppy – to give baby A – Winnie – a better chance of survival.

‘There was already a 48 per cent difference in the girls’ size and they were worried that Poppy would have a heart attack as she was passing all the nutrient to Winnie and they thought Winnie might have a stroke,’ she said.

‘But I didn’t want to choose one baby over the other.’

Lean then got a second opinion at the Memorial Hermann Hospital, Houston, Texas.

She was told surgery could be more successful than previously advised and was given the night to rest.

‘We spent the night in shock at the day’s events and praying we would still have two heartbeats the next day,’ Leah said.

‘I remember laying there most of the night trying to finalise the girls’ names, because I couldn’t imagine something happening to them and not already having names picked out.’

The next morning Leah underwent surgery where she was kept awake while doctors worked to steady the blood imbalance.

The procedure was successful, and Leah was sent home on bed rest and was seen regularly by doctors.

At 27 weeks and six days Leah’s waters broke and she was rushed to the delivery ward and given steroids to stop her labour.

‘We needed to buy as much time as possible because 28 weeks was still too early to deliver them safely,’ she said.

Leah managed to hold on under 31 weeks and five days, when Poppy’s heartbeat dropped too low and wouldn’t go up. 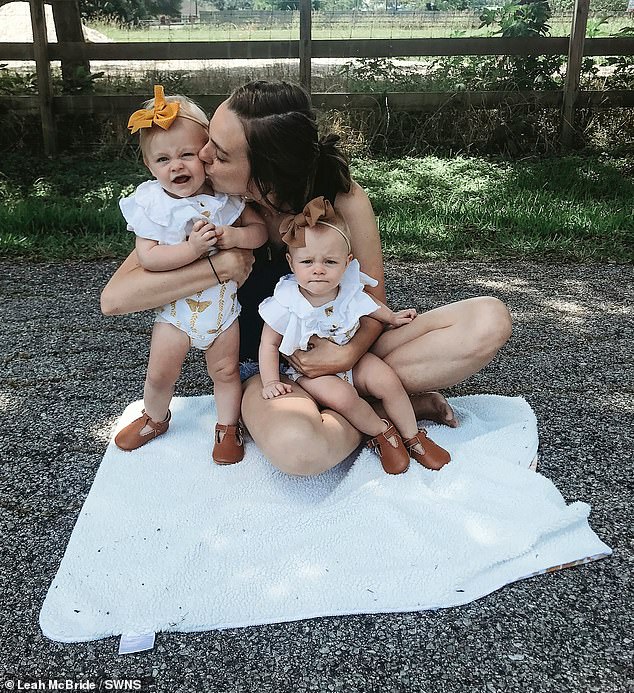 Mother Leah McBride of Texas with her twins Poppy and Winnie, who are now healthy and thriving 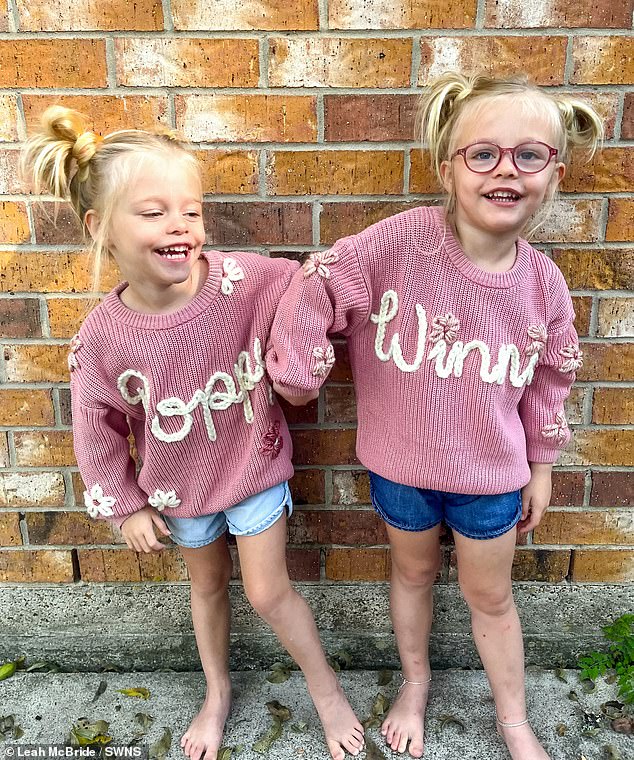 The girls, pictured here in named jumpers, are now three years old and thriving and the best of friends

‘Poppy just needed a little bit of oxygen, but she was OK,’ Leah said.

‘She was smaller than a little elf on the shelf.

‘Doctors said she was feisty.

‘But Winnie, the bigger of the two, who I had never been concerned about, was very unhealthy.

‘Her lungs were underdeveloped.

‘They weren’t sure if she was going to make it.’

Miraculously Winnie pulled through but had to have brain surgery at 14 days old due to a build-up of fluid on the brain.

‘A reservoir was placed with the intention to place a shunt as soon as she grew a little more but despite there only being a 10 per cent chance of it resolving on its own it did,’ Leah said.

Poppy had to have blood transfusions and stayed in hospital two days longer than her sister to make sure she reached 4lbs.

Now both twins have nothing wrong with them, apart from Winnie having to wear glasses, and the best of friends.

‘They are as smart as can be,’ Leah said.

‘Winnie is smarter than average.

‘She can read books from memory at three.

‘I tried to move their beds apart recently and they weren’t having it.

‘They are both amazing.’