The first word I ever uttered, my father once told me, was “kaikai” – the word for food in Papua New Guinea. This made complete sense. We were living in Port Moresby. I was one-and-a-bit-years old. And it’s always good to be fed.

Most of the kaikai involved large quantities of paw-paw. It’s delicious, I’m sure, but I now reject the stuff. I figure I’ve already eaten a lifetime’s supply.

My first word, I notice, was thoroughly utilitarian. It was designed to get me what I wanted. Not so the first words of my tiny grandson. He’s now at a similar age to me when I first shouted for “kaikai”, but his vocabulary is more poetry than prose. 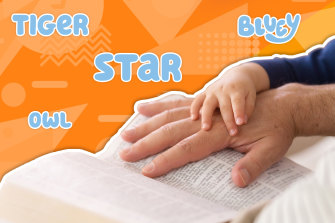 As accurately I can count it, Pip’s dictionary currently consists of 18 words. It’s not a large vocabulary – perhaps slightly small for his age – yet each of the words is pronounced with enormous vigour and precision.

And, so, he says “ti-ger” with a fierceness that brings to mind the animal itself. When Pip uses the word, a giant cat stealthily enters the room. It is the tiger of William Blake, burning bright in the forests of the night.

It’s the same with “owl”, which Pip pronounces in an elongated way, leaning on the “ow”, with the “l” hovering like a shimmer of wings.

“Kangaroo” he does with a certain rhythm, landing an equal stress on each syllable, as if the animal is bounding through the room. As he says it, he performs the Australian Sign Language for kangaroo, taught to him by his other grandmother, the one who knows Auslan. It does give his “kangaroo” added bounce.

And yet, as I say, his vocabulary is relatively small. “If I can’t get a word entirely right,” he seems to be saying, “I’ll leave it until later when I can”.

His father was like this. The Space Cadet spoke few words, until he could put them together into sentences. It was the same with pieces of information. Pip’s father enjoyed producing the finished product with a flourish, rather than showing you “the workings”. He liked to be a magician pulling an unexpected rabbit from a recent-revealed hat.

“Did you learn that at school?” I once asked him after he’d mentioned some curious fact of history. “Oh no,” he said, “I just always knew it.”

How convenient, I thought at the time, to be born with a detailed understanding of the Eureka Stockade, or the Gallipoli campaign, or Burke and Wills. How convenient to escape the need to learn it later, like everyone else.

Pip shares his father’s perfectionist tendencies. He also eschews any plain and practical words. Why does he not call for “kaikai”, or its English variants, as I used to do? Why can’t he say “nappy” when in need of a change, or “cold” when we’ve forgotten to replace his wet socks?

These basic wants, I suppose, are always promptly met by his team of attentive courtiers. It would be like the Queen calling for her carriage. Unnecessary. It’s already waiting for her out the front.

This gives Pip time for other words. He has “eye” and “ear” down pat, but only so that he may indicate their positioning on his dog’s handsome head. Clancy, patiently, allows the anatomy lesson, constantly repeated.

Pip has the crisp word “Buddha” for the small wooden statue in the garden, and a “moo” for his plastic cow. At this stage, he lacks a “yes”, but his “no!” comes with its own built-in exclamation mark, which is handy. It is always delivered with a vigorous shake of the head, as if it would be ungrammatical to utter the word without the accompanying gesture.

“Children”, wrote Robert Graves in one of his best-known poems, “are dumb to say how hot the day is, how hot the scent of the summer rose.”

In The Cool Web, Graves argued that language limits our ability to experience the world directly, naked and unarmed: “There’s a cool web of language winds us in, retreat from too much joy or too much fear.”

Those who are pre-verbal, Graves said with admiration, must face the “wide glare of the children’s day”. They are unable to “spell away” the vividness of life.

Maybe. But watching Pip’s vocabulary grow, his handful of words don’t seem like a retreat from feeling. As he speaks his eighteen words – each clearly enunciated like an old-school thespian – they appear an index to his passions; a tidy guide to what he cares about.

There’s “mummy”, of course, and “daddy”. There’s “Bluey” on the television – and who needs the name of any competing program? – as well as “tree” and “car”. Also: “bird”, for whenever one is spotted in the sky, and “bubbler” for the device in the local park – the one that just happens to contain the world’s most delicious water.

The word “Pa” is yet to be uttered, despite it being his poor old Pa, with his already bad back, who holds Pip horizontal to the ground, for what seems like hours on end, at just the right height that he might slurp that delicious water.

I’m guessing he’s just waiting to get the pronunciation right. I imagine a plosive “P”, indicating vitality and purpose, followed by an elongated “a” that might signify the quiet wisdom of age.

No wonder he’s taking his time.