Editor’s note: This piece was written on July 7, 2020, less than three weeks after the death of the author’s husband. It captures the emotions she was feeling at that time.

My husband is dead. Those words don’t feel real. Ian Donald Maclean-Blevins, age 34, died at 12:50 a.m. on Friday, June 19, 2020. I try not to count the days, but I do wake up every Friday morning and acknowledge that it’s been another week without him. How long will that counting go on?  For a year? Two years? Forever?

It doesn’t feel real. His autopsy is done, his ashes returned to me, his obituary posted, and I’ve received his death certificates, but I still expect him to come home to me. It feels like when he was in the hospital, when I couldn’t visit him for weeks at a time due to COVID-19 restrictions.

He will be home soon, as soon as he is better, I catch myself telling myself. Every morning when I wake up, for a split second, I forget ― I forget that he’s gone, I forget that I’m grieving, I forget that life as I knew it is over. I have little moments like that throughout the day, too. I will be looking at pictures of him for the hundredth time on Instagram or Facebook and for just a second I forget why I am doing it ― why I am obsessed with seeing him ― when he should be sitting on the couch next to me.

Grief guidelines call it denial. There is no way of knowing what that word really means until you have to feel it. No amount of reading can prepare you for it.

The last week of his life, I knew he was dying, and he knew, as well. He had said that he didn’t want to be intubated again ― for what would have been the fourth time in less than four months ― but in the end, he said he wanted to live. So, I fought. I argued with doctors, I talked to specialists, I begged his nurses to do something ― anything. After his condition continued to worsen, I finally persuaded them to change his treatment course, but it was too late.

Knowing someone is dying is different than knowing they are dead. There is still hope.

He was hospitalized on March 12, and after being intubated he went into cardiac arrest. I was sitting in the waiting room when they called a Code Blue to his room. I didn’t know his room number, but I looked up and saw a blue blinking light outside of his room and I knew it was him. I left the waiting room, tried to rush into his room, and fell to the ground screaming. Nurses dragged me away, put me in a room with a chaplain and left me to wait. I sat there for 30 minutes not knowing anything; I found out later that they performed CPR for 16 minutes. At the time, it was the worst moments of my life. I was so afraid he was going to die, but I still had hope.

When I got the call from the hospital at 12:33 a.m. on June 19 telling me to get there as soon as possible, that they were performing CPR, logically I knew he was dying. You don’t get two chances like that in three months, two times of surviving for 15-plus minutes while they perform CPR, especially not when your kidneys have shut down, your heart is weak, you have blood clots, bleeding and infection. But still, I had hope.

As I drove to the hospital in the middle of that night, as I ran to his room, I still had hope. Then I saw the ICU doctor. He was the same doctor who was on duty the first night Ian was hospitalized. I don’t remember what he said. I know I asked if my husband’s parents, who had just flown in 12 hours before, were there yet, not wanting to have to be the one to tell his mother that her oldest child had died, that she had lost two sons now. At that moment I lost hope. But it still wasn’t real.

After the hope came the denial. I held his hand, kissed his forehead, hugged his cold body. I sat with him for hours, crying with his parents, telling him how much I love him, and refusing to let go of his hand. Looking at him, searching for a breath, checking to see if his chest was rising, trying to hear a heartbeat in the silence. As dawn approached, I logically knew it was time to go. He was dead. He wasn’t coming back. It wasn’t him anymore. It was just his body. I was afraid if I left him that he wouldn’t be able to come back. As long as I stayed with him, it would be alright. 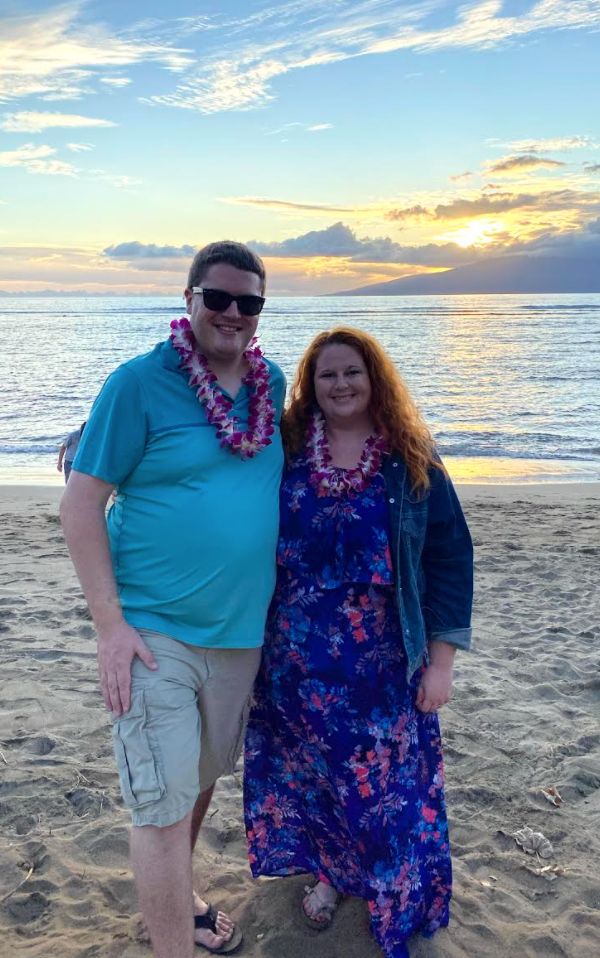 It didn’t get any easier in the following days. I thought if I figured out why he died, what part of his complicated rare autoimmune disorder killed him, and I told the doctors, they could fix him. I believed I could still save him if I just figured out what happened. His hematologist called me a few days later with the autopsy results. He told me about the blood clots in his heart, his brain, his adrenal glands, the bleeding and infection in his lungs. He told me how his kidneys had stopped working for still unknown reasons. I thought that now that we knew what went wrong, we could fix it. After months of listening to doctors and doing my own research on his disease, I finally knew what he needed to save him … and it didn’t matter that he was already dead.

I didn’t want to call the funeral home, or write his obituary, or send away for his death certificates. I thought if I didn’t do any of it that, it wasn’t real. He could still come back to me, we could still be happy together for another 30, 40 or 50 years! As I checked those items off my list, it didn’t lessen the denial and disbelief at all. I have his death certificates, I have his ashes in an urn by my bed, and I have read the obituary I wrote dozens of times, but none of it changes my denial.

Denial is your body’s way of trying to lessen the blow. Your body knows that you can’t handle the full force of the grief and mourning of losing your 34-year-old husband, so it attempts to protect you. It doesn’t allow you to believe what has happened until your body, and your heart, are ready to feel it. Until your body has wrapped your heart and soul in a protective barrier (which won’t help, but hey, your body has to try, at least) so you can survive. So, when you fall into the unending depression and grief, you don’t feel as if you fell quite as far.

It turns out you can literally die from a broken heart; it’s called the widowhood effect. There’s actually an increased probability of dying within the first three months after a partner’s death. This most often happens with older people, people who have been together for decades and decades. Ian and I didn’t even make it to our fifth wedding anniversary, which is later this month. Does that protect me?

Grief causes real physical harm to your body. In addition to the depression, anxiety and feelings of guilt, physical illness can occur. I stopped eating, I stopped sleeping, my body is sore from being curled up in a ball all day and I have a constant headache from crying. I don’t exercise enough, I self-medicate, and I experience dark thoughts because I literally can’t imagine living without Ian.

I feel completely alone, which is ridiculous, because other people lose their spouses every single day. But they didn’t lose MY husband, they didn’t lose MY hopes and dreams for our life together. Even his parents and sibling’s grief is different than mine because we aren’t mourning the same person. They are mourning their son or their brother. I am mourning the person I spent almost every day with for eight years. I am mourning the person I married and bought a house with and traveled the world with and got two corgis with. That’s not to say that one person’s grief is better or worse than another’s ― everyone’s grief is valid ― but I am the only one grieving Ian as my husband and partner.

I can’t understand his mother’s grief at losing another son, because I’ve never lost a son, and she can’t understand my grief because her husband of over 35 years is there with her, grieving alongside her. I have voraciously read every article or book I could find about the grief of losing a husband, especially a young husband, but I still feel completely alone. Nothing can prepare you for grief, and especially denial, because it is unique to you.

It’s only been 19 days since I lost my husband. I’m still in the denial phase (don’t worry, there is a lot of anger mixed in there too, but I’ll leave those feelings for another day), and who knows how long it will last. There is no timetable, no rulebook. Everyone’s experience is different, everyone’s grief is valid, blah blah blah.

I still have a long way to go in the grief process. I’m not ready to move on from denial yet, because denial at least protects me from the reality. It allows me to get out of bed and try and take care of the important things, the money, accounts, sending out a death certificate that costs $20 each and that no one returns.

It also gives me hope, hope that it isn’t real, that it’s all just a nightmare and I will be able to see Ian again soon. My body isn’t ready to give up the hope yet.

Kristin Crane is a librarian who lives in Seattle with her two corgis, Bagel and Donut. Follow @bagelbitecorgi on Instagram for pictures of her dogs and tributes to her husband.

Do you have a compelling personal story you’d like to see published on HuffPost? Find out what we’re looking for here and send us a pitch!