‘My mind is blown’: Mum shows off her VERY simple box-folding trick to ensure her food doesn’t get freezer burn – so do you do it?

A woman has shared her simple box-folding trick to prevent food from getting freezer burn.

Penny, a mum from Melbourne, shared a video of herself showing exactly how she keeps the air out of her frozen meals and vegetables to prevent the ice crystals from forming on the surface of the products.

Instead of inserting the tab into the allocated slot, she simply folded the top of the box over to completely seal the product inside.

‘Does anyone else do this little trick with their boxes before putting them in the freezer? No frost bite if you seal it properly,’ she wrote in a Facebook group. 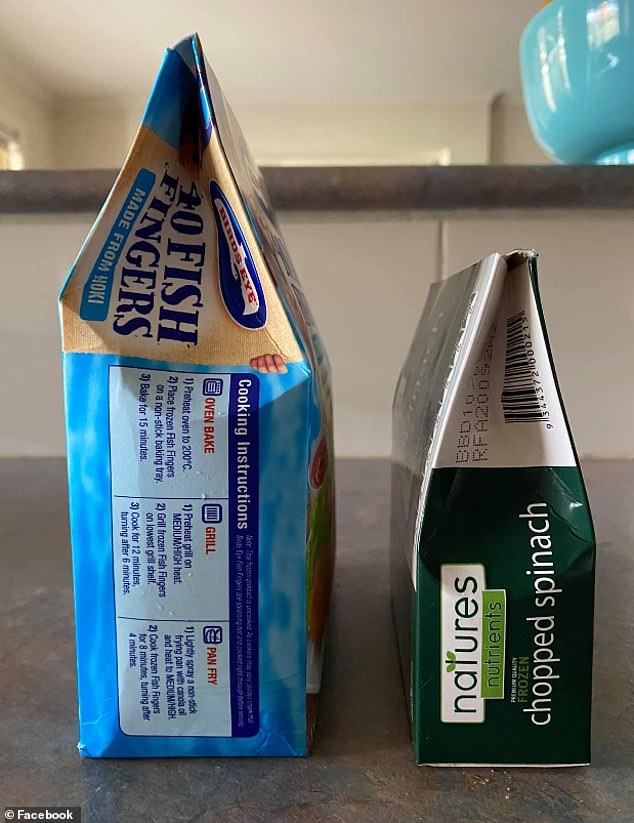 A woman has shared her simple folding trick to avoid getting freezer-burned food. Instead of inserting the tab into the allocated slot, she simply folded the top of the box over to completely seal the product inside

Freezer burn occurs when the moisture in an opened package of food evaporates and then it refreezes on the surface, creating the crystals on top.

To fold the cardboard, the woman tucked the back of the small flap into the box, then she pushed the sides in to create a ‘V’ shape.

Next, she pushed the front of the flap into the box, and pinched both sides together to create a secure seal.

Those who didn’t know the folding method said their minds were ‘blown’ while others revealed they have been doing the trick for years.

‘This is my favourite trick,’ one woman wrote, while another added: ‘My partner comments how good this trick is every time he does it. It drives me nuts but yes, it’s a fantastic hack.’

Many said they do the same folding technique on cereal boxes, which helps keep it from going stale.

‘It’s great for big tall boxes of cereal that don’t fit on shelves. Who wants to put in a container when it’s all gone in a couple of days because we are a big family. Big thumbs up for this hack,’ one mother wrote.

‘It’s a great idea… bulldog clips are fantastic and strong too,’ one wrote, while another added: ‘They are awesome, I use them to seal the box when it starts to get loose from opening and closing all the time.’

The folding method comes nearly a year after a British mother shared a now-viral video of her sealing a cereal box the ‘correct’ way.

‘It’s only taken me 40 years, but I now know the correct way to close a cereal box. Genius. It takes seconds, no more dried up cereal and ugly torn boxes to greet me every morning,’ she said.