The mother of five-year-old April Jones who was abducted from outside her home and murdered in 2012 pays tribute to her ‘little Thumbelina’ whom you’d ‘never want to let go’ in a clip from a documentary about the child’s murder.

Coral Jones, a mother-of-three, is featured playing with April’s favourite toy, a wind-up hamster, and laughing that it ‘used to drive us mad’ as she looks over baby and toddler photos of April with her siblings, Jazmin (Jazz) and Harley.

She speaks to the camera crew in the first episode of The Disappearance of April Jones, which airs on Channel 4 tonight at 9pm and will also be shown on Tuesday and Wednesday, and describes herself as having a ‘normal family’.

April Jones went missing from outside her home in Machynlleth, Wales, on 1 October 2012 as she was playing with her friend. After a high-profile search operation was launched to find the schoolgirl, 46-year-old Mark Bridger from Surrey was charged with her murder. He was convicted and sentenced to a whole-life jail term the following Spring. April’s body has never been found.

Ten years on from her murder, a documentary has been made about the case, which stunned the quaint market town where April lived. The first episode opens with the schoolgirl’s sister, Jazz, pointing out the shops in the town, while a resident names Alyson Jones says living there is like being a part of ‘a big family’.

However, looking back she says: ‘The feeling of utter shock and horror of it all was spreading like wildfire.’

Coral then speaks about her family in a moving scene where she looks at April’s childhood photos. 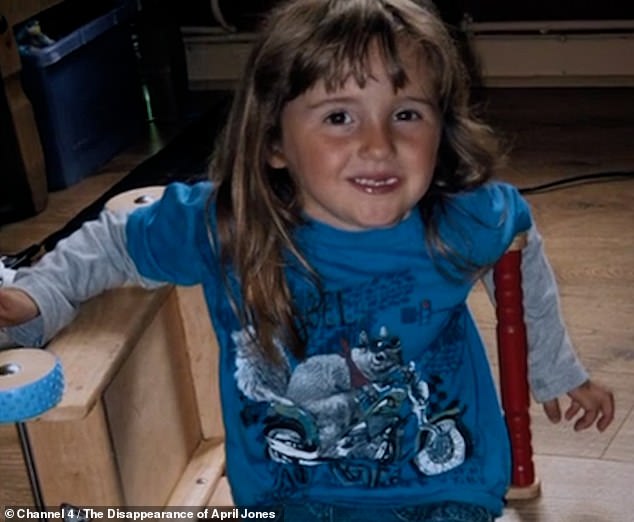 April Jones, five, (pictured) disappeared from outside her home in Machynlleth, Wales, on October 1, 2012. Her disappearance and investigation surrounding her murder is explored in The Disappearance of April Jones, to air over the next three nights on Channel 4 at 9pm 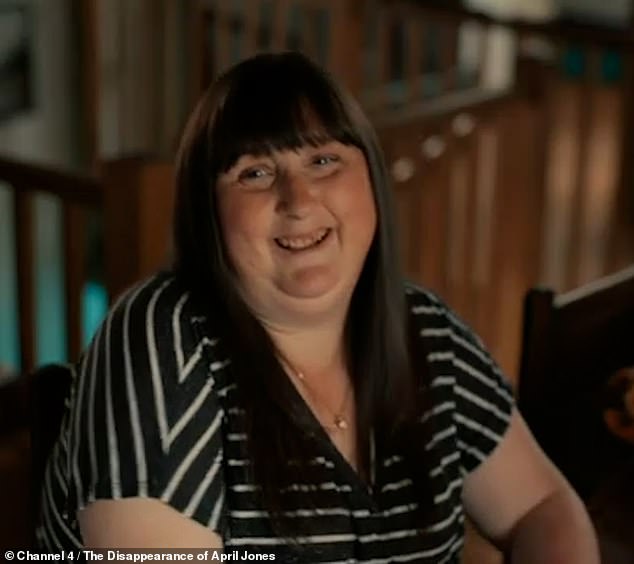 Coral is featured looking at a photo of April in an incubator after she was born premature.

She adds: ‘She developed cerebral palsy from the hip down. She had trouble getting places and she learnt to ride a bike at an earlier age so she could keep up with her friends.’

The mother-of-three then demonstrates April’s favourite toy as she pulls at its drawstring before letting it run on the desk.

The documentary goes back to Monday, October 1, 2012 when April went missing after her mother let her play outside the house for an extra 15 minutes as a reward for getting a good school report.

Jazz recalls the last time she saw her sister, recalling how she gave her a ‘massive hug’ and saying: ‘I’m going now, I’ll see you later. I love you.’

Coral also recalls the last time she saw April, after allowing her to accompany her schoolfriend home on their bikes.

Other members of the community recall finding out April had gone missing as words spread of the five-year-old’s disappearance.

She added: ‘I was so angry, so frustrated. How are we going to find her?’

Ceri Herbert, a resident and family friend, recalled her desperation as she put out calls on Facebook and Twitter to find April.

‘Within minutes and hours it had spread across the internet,’ she recalled, as people in the community – and in different parts of the UK – spread the message that April had gone missing.

The documentary also interviews Andy John, a senior investigating officer at Dyfed Powys Police, recalling the investigation as they were tasked with finding a child who had seemed to have ‘disappeared off the face of the earth’.

He says: ‘There were people living within our force’s area who were registered sex offenders, who had committed offences against children.’

Andy then explains the officers were out and about trying to speak to as many people as possible to find out information.

He adds: ‘We knew that the opportunity of finding April was diminishing by the hour.’

However, Andy recalls a breakthrough in the case when police received intelligence that April had got into a vehicle with a left-hand drive, which quickly led them to Mark Bridger – someone who was known in the town.

‘We knew him. April would’ve known him,’ Coral says. ‘It made me feel sick. Never in a million years did I think it would be a local.’

As police began a manhunt for Bridger, they took a search team to the Brecon Mountains with dozens of volunteers who hoped to find April Jones alive.

At the end of the first episode, Andy reveals the moment the search teams located Bridger, who ‘didn’t have a care in the world’ as he walked his dog near his house the day after April was reported missing, before he was arrested and detained at Aberystwyth police station.