Scott Morrison is planning a last-ditch attempt to claw back ground in the final week of the campaign after fuelling the political row over his character by admitting he is “a bit of a bulldozer” but will change after the election.

The prime minister will use his official campaign launch on Sunday to hold out the promise of better times when the country emerges from the coronavirus pandemic, adding new policies to assure voters they can have positive change without a change of government. 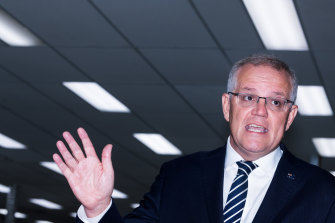 The debate intensifies attention on Scott Morrison’s character when Liberal campaigners believe the discontent with the prime minister has swollen to a scale that could sweep the government out of power. Credit:James Brickwood

But Labor leader Anthony Albanese seized on the “bulldozer” remark on Friday, saying it was a concession Morrison was “a wrecker, not a builder” and had put forward “nothing positive” about the future.

The debate intensifies attention on Morrison’s character when Liberal campaigners believe the discontent with the prime minister has swollen to a scale that could sweep the government out of power.

A new analysis of the campaign confirms Morrison has avoided key electorates where his appearance would damage government MPs in urban electorates including Treasurer Josh Frydenberg and moderate Liberals such as Dave Sharma, Tim Wilson and Trent Zimmerman.

Morrison has thrown more effort into the knife-edge seat of Chisholm in Melbourne, where he campaigned on Friday, as well as regional seats from Bass and Braddon in Tasmania to Gilmore on the NSW South Coast.

Albanese has campaigned most often in two Queensland target seats, Brisbane and Leichhardt, held by the Liberals, and Solomon in the Northern Territory, which Labor is defending against an attack from the Nationals.

One Liberal admitted on Friday that some voters at early polling stations “hated” Morrison while a second said the resentment was dragging down the government.

Morrison’s remark, in response to reporters’ questions about whether he was listening to voters, suggested he would change “gears” after the election.

“What Australians have needed from me going through this pandemic has been strength and resilience,” he said.

“Now, I admit that hasn’t enabled Australians to see a lot of other gears in the way I work. And I know Australians know that I can be a bit of a bulldozer when it comes to issues.

“But, you know, over the last few years that’s been pretty important, to ensure we’ve been able to get through some of the most important things that we’ve had to do.”

Morrison added that he would change as the situation changed.

“As we go into this next period on the other side of this election, I know there are things that are going to have to change with the way I do things,” he said.

Morrison used the same words in January when he told The Sydney Morning Herald journalist Deborah Snow he saw himself as a problem-solver and pragmatist but added he could be “a bit of a bulldozer” because he was focused on the task in front of him.

But while the Liberal camp portrayed the use of the “bulldozer” term in the final stage of the campaign as a message to voters that things would be different after the election, Albanese said the only way they could achieve any change was to change the government.

“I know Australians know that I can be a bit of a bulldozer when it comes to issues.”

“It’s extraordinary that Scott Morrison is conceding that he is a wrecker, not a builder. That he knocks things down and doesn’t build things up,” said Albanese, speaking exclusively to the Herald and The Age on Fitzroy Island off the coast of Cairns.

“People see that Scott Morrison is desperate and has put forward nothing positive about the future. They recognise the essential character of this bloke is negative and what we need is a positive vision for a better future for Australia. Labor’s offering that. This guy isn’t even trying.”

Asked how he would combat a prime minister prepared to throw the kitchen sink at retaining power, and whether Labor had learned the lesson of its 2019 defeat, Albanese made it clear he would step up his campaign in the final week.

“I will be campaigning and fighting for a better future until 6pm on Saturday, May 21, and I will leave nothing on the field,” he said.

Morrison has visited 61 electorates in the first five weeks of the official campaign compared with Albanese’s 40, reflecting the latter’s time at home with COVID-19 and a slower pace in the early stages of the contest. Labor’s tally increases to 53 seats when visits by shadow ministers acting for Albanese during his isolation period are included.

Key advisers to Morrison acknowledge the national polls are against the government but are preparing for an intense final week, mirroring the hectic pace in the final days of the 2019 election when Morrison pulled off a “miracle” victory. The Coalition believes it can hold ground in Queensland and Tasmania while gaining seats such as Gilmore in NSW and possibly McEwen in Victoria and Lyons in Tasmania.

In a clear sign Labor’s campaign is looking to win rather than just hold seats, party strategists pointed to the fact Albanese was now pushing into a second ring of seats that were considered unlikely targets at the start of the campaign. They include Leichhardt, Deakin in Melbourne and North Sydney.

North Sydney has been a Liberal stronghold for decades and is a three-cornered contest between Zimmerman, independent Kylea Tink and Labor’s Catherine Renshaw.

On current trends, there is a growing belief within Labor that it will claim seats including Reid, Bennelong, Chisholm and Boothby. Labor also believes it will hold seats the Coalition is targeting such as McEwen, and Parramatta in Sydney, a seat Morrison has visited five times.