On the outskirts of a town in an industrial region of Germany is the modern equivalent of a leper colony.

Amid a local coronavirus spike, police have sealed off an entire housing estate and put up 8ft-high metal barriers to stop residents leaving – regardless of whether they have the disease or not.

What all the residents have in common is that they work at, or live near, a giant meat processing plant at the centre of the outbreak.

More than 1,500 employees tested positive for the disease at the Tonnies Fleisch abattoir in Verl, North Rhine-Westphalia, which supplies supermarket giants including Lidl and Aldi. 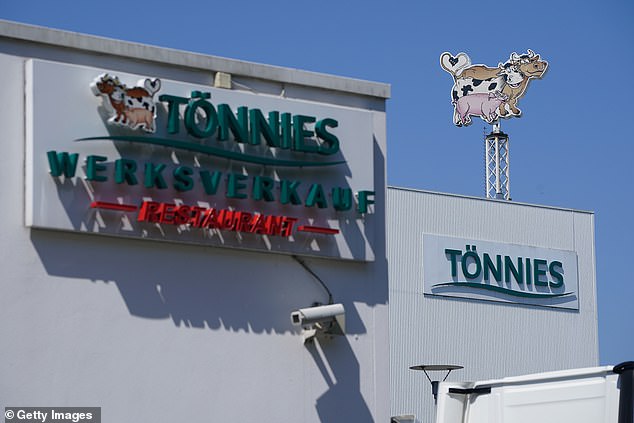 More than 1,500 employees tested positive for the disease at the Tonnies Fleisch abattoir (pictured)in Verl, North Rhine-Westphalia, which supplies supermarket giants including Lidl and Aldi

Local officials decided the only way to stop the spread was to prevent as many workers as possible from mixing with the rest of society, which meant quarantining the mainly migrant residents in apartment blocks.

It would be good to think the spike in this part of Germany – a country widely praised for its handling of the pandemic – is just a one-off.

But the fact is that in many countries, including Britain, meat factories have become breeding grounds for Covid-19.

In Yorkshire, more than a quarter of the workforce at an Asda-owned meat processing site have tested positive, while 217 cases were found among the 560 staff at the 2 Sisters meat processing factory in Anglesey, North Wales, the main supplier of supermarket chicken in the UK. 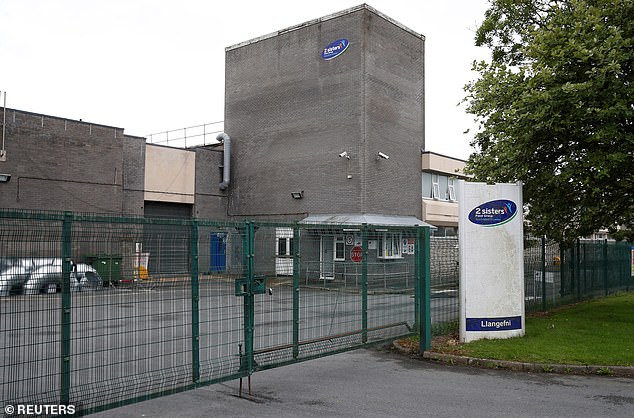 217 cases were found among the 560 staff at the 2 Sisters meat processing factory (pictured) in Anglesey, North Wales

A further 417 cases have been linked to other Welsh meat plants.

The ugly truth is that cheap meat production poses huge health risks to both humans and animals, something highlighted by those who fear a new trade deal with the US could open the floodgates to more low-quality meat imports.

It is well known that the model of the multi-billion-pound meat industry that supplies fast-food chains, supermarkets and restaurants, makes farmhands and abattoir workers vulnerable to pandemics.

Indeed, it can be responsible for creating killer diseases.

It is not to blame for Covid-19 –that is thought to have originated in bats – but it was directly responsible for BSE, or so-called ‘mad cow disease’, in 1989 as a result of cattle being fed offal, effectively turning them into cannibals; for bird flu in 1997, which originated in factory-farmed geese, and for the swine flu pandemic in 2009, which started on a pig farm in Mexico and was spread by industrial pig farms in the United States.

‘If you want to create catastrophic pandemics, then build factory farms,’ says Dr Michael Greger, an infectious diseases expert who fears that the current coronavirus could be followed by something much more deadly.

‘If you crowd tens of thousands of chronically stressed animals into cramped, football field-sized sheds to lie beak to beak, or snout to snout, on top of their own waste, it’s a breeding ground for disease.’

Meat production is an industry that helps feed nations and provides millions of jobs – but at huge cost to the environment, human health and animal welfare.

Globally, about 70 billion farm animals a year are slaughtered for human consumption, two-thirds from factory farms.

A third of the world’s grain harvest is used to feed these animals – cereals that could be used to feed more people if more animals were reared in fields.

In America, 99 per cent of chicken, beef and pork comes from animals reared in sheds, typically with little or no natural light.

Herds are routinely pumped with antibiotics to control the spread of disease.

The consequence has been the rise of deadly superbugs as the drugs become less effective in humans – and the appearance of ever deadlier viruses that jump from farm animals to humans.

Dr Greger, author of Bird Flu: A Virus Of Our Own Hatching, says: ‘We are changing the way animals live on a global scale.’

Referring to the way poultry and pigs are mass-produced, he says: ‘We now have billions of feathered and curly-tailed test tubes for viruses to incubate and mutate. Billions more spins at pandemic roulette.’

As the world’s appetite for cheap chicken, pork and beef increases, the giant producers have consolidated and become more powerful.

In the US, just six companies dominate the market, controlling about 83 per cent of the beef-packing industry; 66 per cent of pork packing; and more than half of broiler chicken processing.

In Germany, Tonnies Fleisch, which employs 16,500 workers and has an annual revenue of about £6 billion, typifies the giant slaughterhouse and meat-packing facilities that have sprung up across Europe.

Normally, 20,000 pigs a day are killed. Around half of the meat is exported.

Supply chains are deliberately difficult to trace – fast-food chains would rather customers didn’t think about where their meat comes from, but doubtless some Tonnies products end up in the UK.

Above Tonnies’ building is its gaudy logo featuring three cartoon characters: a smiling hog, a contented cow and a grinning brown bullock.

But there is nothing cheerful about what goes on behind these doors, either for the animals whose lives end on the slaughterhouse floor, for the low-paid workers or, now, for an entire local community at risk from Covid-19.

Until the pandemic hit, Clemens Tonnies, its billionaire boss, relished his status as one of the world’s richest meat barons. 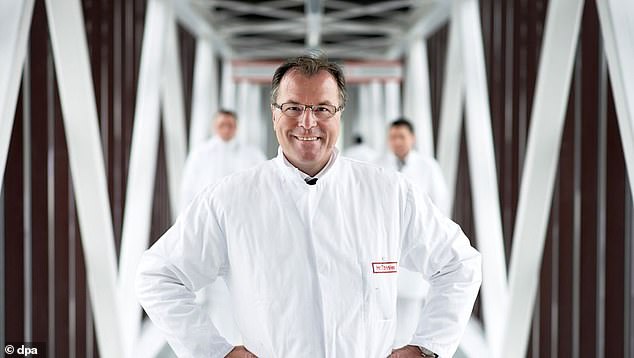 Until the pandemic hit, Clemens Tonnies (pictured), its billionaire boss, relished his status as one of the world’s richest meat barons

But as he now admits, the business faces an ‘existential crisis’.

His nephew, who owns 50 per cent of the company, has called on him to quit, accusing the management of being irresponsible and jeopardising the health and safety of local people.

The firm is not alone. Across the world, slaughterhouses and meat-processing facilities have been forced to close or reduce capacity because of the coronavirus.

Emergency pig and poultry ‘depopulation’ – as it is euphemistically known in the industry – can be carried out by suffocation or ‘ventilation shutdown’, where animals die of organ failure due to planned overheating.

Such is the background to concerns from farming groups, environmental organisations and animal welfare campaigners who are calling for the Government not to allow cheap food imports from the US, where standards in agriculture are less stringent than here.

It’s no wonder that there are encouraging signs that both shoppers and investors are beginning to take note.

Maria Lettini, of FAIRR, an investor organisation that highlights the financial risks associated with factory farms, says: ‘The more consumers hear of horror stories at the processing plant, the more they hesitate at the supermarket shelf.

‘These choices are going to have long-lasting consequences for the meat industry and it will need to respond with urgent and far-reaching action.’

Analysts looked at 60 global meat producers and concluded that 44, with a combined value of £175billion, were ‘high risk’.

Meanwhile, the market share of companies that produce plant-based alternatives to meat is increasing.

Patrick Brown, of Impossible Foods, which makes vegetarian burgers for restaurants and cafes including Starbucks, says that the meat industry is in the middle of a reckoning. 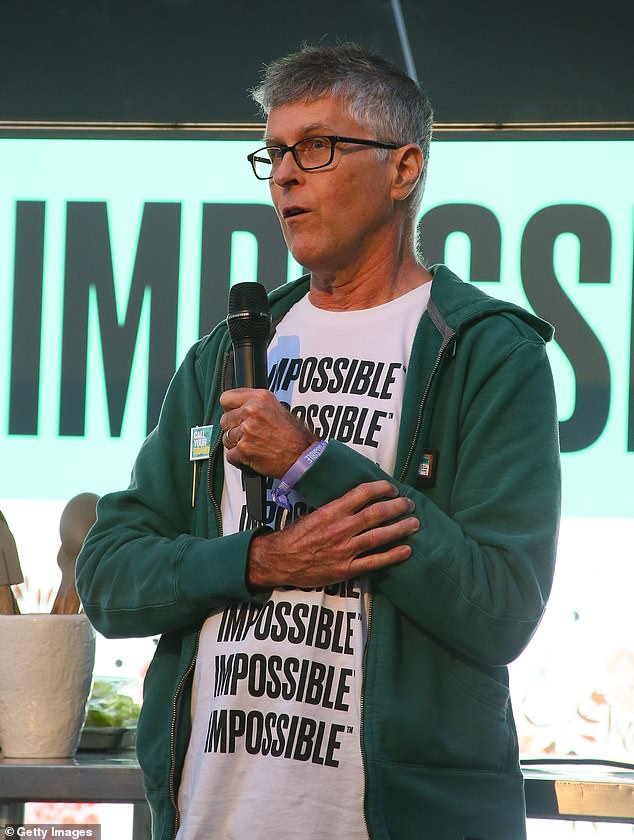 Patrick Brown (pictured), of Impossible Foods, which makes vegetarian burgers for restaurants and cafes including Starbucks, says that the meat industry is in the middle of a reckoning.

Back in Verl, local politicians are belatedly waking up to the gross negligence of parts of the meat industry.

The question is whether, when the immediate crisis passes, the public’s appetite for cheap meat will lessen.

Chillingly, Dr Greger believes the next pandemic linked to factory farming could have a 50 per cent fatality rate – killing millions.

He hopes Covid-19 is ‘just the dry run we needed, the fire drill to wake us up out of our complacency to reform the food system’.

Isabel Oakeshott is co-author of Farmageddon: The True Cost Of Cheap Meat, published by Bloomsbury.