An independent review has found changes to industrial law that accompanied JobKeeper and let businesses alter their employees' hours, duties and locations of work helped keep workers in jobs.

Businesses told consulting firm Nous Group's review that the changes let them reduce staff hours rather than resorting to lay offs or stand downs, which is all Australia's pre-pandemic law typically allowed if a business was forced to stop trading by an unexpected event. 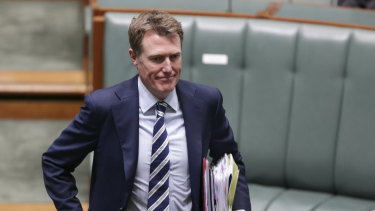 That came at the cost of other employees who were pressured into working more hours under JobKeeper, making it harder for them to keep second jobs, and made to take annual leave when they had saved it up to let them take time off for placements required by study courses.

Attorney-General Christian Porter said the report's findings overall vindicated the government's decision to extend the legal changes past their original September expiry until March 2021 "despite the Labor Party’s attempts to reduce their utility and put jobs at risk".

Labor's industrial relations spokesman Tony Burke said the party, which ultimately voted in favour of the extension, opposed aspects of it that would let businesses with growing profits cut staff hours and wages.

"It is ridiculous that any worker should be punished because the business they work for has become more profitable," Mr Burke said.

The report adds weight to the government's case for more flexibility in Australia's industrial regime, which it is expected to make as part of a reform package that Mr Porter hopes to have before Parliament by the end of the year.

Nearly 70 per cent of the 1810 business surveyed for the report said they had taken advantage of the new powers they were given by the JobKeeper law. Of those, most used it to reduce employees' hours and many said it was "essential" to their operations during the pandemic.

"Employers confirmed that the provisions allowed a more flexible response to the COVID-related disruption and helped their businesses pivot for recovery," the report said.

In a significant caveat to the report, Nous wrote that it could not quantify the impact of the JobKeeper industrial changes as distinct from the $1500 payments that accompanied them until September.

It also found several problems with the scheme. Some workers were confused about where to turn for help, with the Fair Work Commission, the industrial tribunal, and Fair Work Ombudsman, the wages inspector, having different roles.

Rules that allowed employers to ask, but not demand, their workers take on extra hours of work were abused by some businesses. In one example cited by Nous, an unnamed national retail chain told its staff they "must" return to work and "make up required hours" backed by a threat of dismissal.

Under the JobKeeper law, new arrangements had to be "reasonable", which the report found caused some issues because its meaning had multiple interpretations. Likewise rules that required the arrangements to be in writing were often ignored, with about 40 per cent of employers instead issuing instructions verbally.

Despite those issues, there were not as many complaints to the Fair Work institutions as had been expected.

Nous has played a significant part in the government's industrial reforms, with one of its principals, Tim Marney, serving as secretary of Mr Porter's working groups on industrial relations reforms, which concluded last month.