Anti-bullying campaigner Monica Lewinsky says the #MeToo movement and society's changing understanding of consent have changed the way she sees her relationship with then US president Bill Clinton in the 1990s.

Speaking in Sydney on Saturday night, Ms Lewinsky said for 20 years she had "clung so steadfastly to this notion that [it] was a real, consensual relationship … and I never allowed myself to explore anything different". 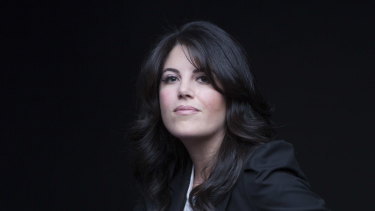 Monica Lewinsky presented “A Compassionate Internet” at the UNSW Centre for Ideas event on Saturday night.

But the #MeToo movement, in which women the world over have shared stories of inappropriate, unwanted and unlawful sexual conduct by powerful men, had changed society's understanding of consent, she said.

"As we started to have public conversations that were different about consent, as we started to recognise abuse of power in different ways, these structures started to crumble around powerful men who have been able to engage in [bad] behaviours and be lauded and celebrated," she said.

"As we started to dismantle that, I started to look at my own situation and just start to ask questions differently."

Ms Lewinsky said she now "100 per cent" believes her relationship with Mr Clinton constituted an abuse of power, not only at the time but in the aftermath.

"There is no doubt for me on many levels," she said. "[But] consent is really complicated. I can blanket say it was not sexual assault. I was not coerced to do anything. I didn't feel like if I didn't do something I would lose my job.

"But I also think that there's a nuanced place where we're starting to look at consent in a way of trying to understand and say, 'Well, with the power differential, with the age difference, given a number of different factors, is consent rendered moot?'

"I started unpacking all this last year … I do think we're asking those questions now and I don't think we've finished with the answers yet."

Ms Lewinsky, 46, said the amount of change brought about by #MeToo in a short time was "extraordinary" but it was not yet clear where social standards and expectations would settle.

"There has been enough momentum and energy and force that the pendulum has moved," she said.

"It's still swinging. Some feel it may have swung too far. It will probably eventually find its place, but wherever it stops, it will be different from where it was before. And I feel grateful to be alive at that time to see something like that happen."

Speaking about public shaming in the modern era, Ms Lewinsky said humiliation had become a "commodity" for publishers, particularly through online clicks.

"If you take a step back and you start to look at some of the ways that people make money from things that happen in society, we start to see that humiliation has become a commodity and an industry. It has become valued in a way that it hadn't been many years before," she said.

"It's a sort of catch 22. It becomes more sadly delicious – in a bad way – for us as a society because we're able to see other people's flaws, and we're constantly comparing our insides to other people's outsides.

"The ability to see that people that we might have on a pedestal are flawed just like we are somehow makes us feel better."

Monica Lewinsky is in Australia as a guest of the UNSW Centre for Ideas and The Wheeler Centre, appearing in Sydney as part of UNTHINKABLE on Saturday, and in Melbourne as part of Broadside Feminist Ideas Festival on Sunday.