Mike Tindall has revealed that he wore a suit with a very festive print for Christmas morning with the Queen – and said she loved it because she adores bright colours.

The former England rugby star and husband of Zara Tindall, 40, shared the sweet story on a podcast with JOE.co.uk.

Two years ago, the Queen chose not to attend church after feeling unwell and instead hosted a private ceremony for Mike and his wife Zara at Sandringham following her tragic miscarriage earlier that year.

To ‘raise the mood’, Mike wore a bright suit printed with a festive pattern for the occasion which he said the Queen approved of.

Speaking on the podcast said: ‘The Queen loves bright colours, that’s why she wears all those amazing colours – she thinks that dark colours are for sad times.’

This year he bought a number of similar suits – one of which he wore to record the podcast – and even wore different ones for Christmas Eve and Christmas Day.

Mike added: ‘I had a suit on just like this and thought “maybe I should be wearing something a little bit different today” but I was trying to raise the mood.’ 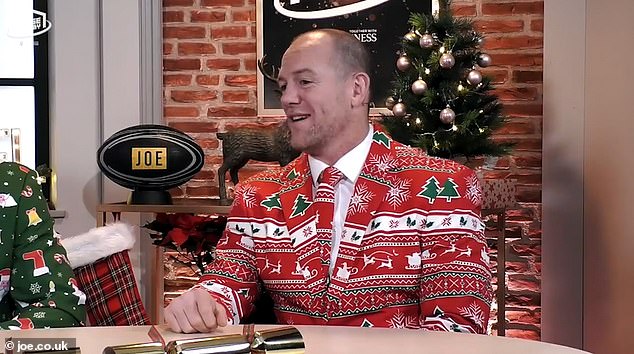 Mike Tindall has revealed he wore a very festive suit, similar to the one pictured, for Christmas morning with the Queen at Sandringham two years ago 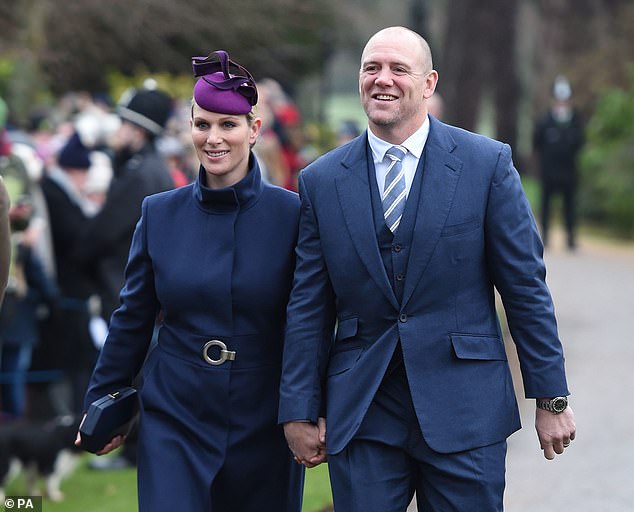 The former England rugby star, pictured with his wife at the St Mary Magdalene Church this year, was still recovering from the news of Zara’s miscarriage and wanted to ‘raise the mood’

The rugby pro later admitted to James Haskell and Alex Payne on the podcast that his pre-royal Christmas had been drsatically different to those he has today.

He added: ‘It’s quite a strange day because normally I spend the whole day either in my boxer shorts or my trackie ps.

‘But by the time I would have normally got up I’ve been to church twice which is quite strange for me as I’m not really from a massive church-going background so yeah it’s completely different. I’ve never had to take as many outfits anywhere.’

Mike goes on to talk about his wife Zara revealing that she is a fan of the Muppets Christmas Carol and an ‘incredible’ present buyer.

He added: ‘My wife is incredible at present buying, it’s unbelievable. This year there was 27 and she takes presents for every single one of them

‘Two weeks ago we had the family Christmas lunch which is all the extended family members and that would be 50-55, and she buys them all presents as well and she was done by about 14th December.’ 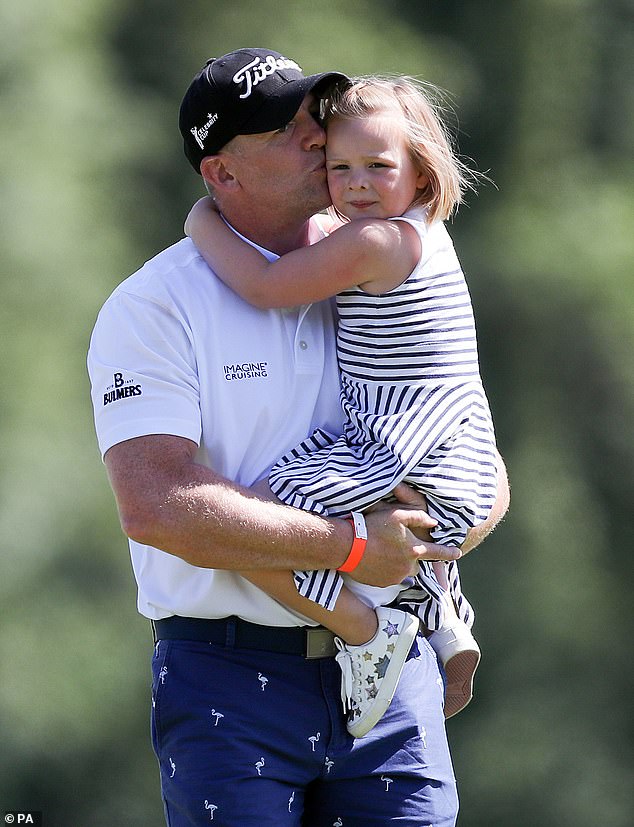 Mike, pictured with his daughter Mia at a golf tournament in June, said: ‘The Queen loves bright colours, that’s why she wears all those amazing colours – she thinks that dark colours are for sad times’

The Queen’s granddaughter had her first child, Mia, in 2014, but suffered a miscarriage just before Christmas in 2016.

Earlier this year she revealed she had suffered a second miscarriage ‘really early on’ in a subsequent pregnancy, which was never announced to the public, in an interview with The Sunday Times.

Speaking of her decision to keep the news private, she said: ‘You need to go through a period where you don’t talk about it because it’s too raw.’

The 37-year-old royal gave birth to another daughter, Lena, on June 18 this year.

Mike opened up about his wife’s miscarriage for the first time last year, telling The Sunday Times how he coped with the loss.

He said: ‘One thing you do learn is how many other people have to go through the same thing.’

Other than finding solace in knowing they were not alone in the situation Mike said that their daughter Mia had been a great comfort.

He continued: ‘The saving grace for us has been Mia’ adding: ‘However down we feel, she will come running up in our faces.’