Midnight Oil will tour no more after 2022. But it’s not the end for the band formed by a bunch of long-haired, prog-rock surfers on Sydney’s northern beaches in the mid-1970s – not yet, anyway. Probably.

Nineteen years after first calling a halt, when lead singer Peter Garrett diverted from songs about politics to actual politics, five years after an unexpected reformation which saw them tour the world for 77 shows from Porto Alegre in Brazil to Sydney’s Domain, and just days after their most recent album – a collaboration with Indigenous artists focused on First Nations recognition in the constitution – was a nominee in the ARIA Awards, one of Australia’s most successful rock bands ever has announced its final concert tour in the first quarter of 2022. 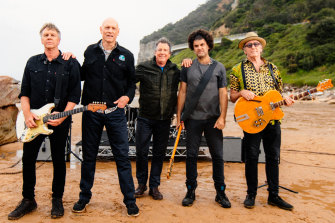 A new album called Resist, due out early next year, will be the first band-only record since 2002’s Capricornia, and will be driven, as ever, by issues-based material such as the climate crisis, which inspired first single Rising Seas. It will also feature the final recordings made by long-time bass player Bones Hillman, who died a year ago, shortly before the band began touring collaborative album The Makarrata Project.

But for a group which, while selling more than 20 million albums, made its reputation playing hundreds of gigs a year all around Australia and then the world, from sweaty pubs to the streets of Manhattan, it is the end to touring that will garner most attention.

In a statement, rather than a press conference or public appearance, the band said that while the songwriting members – Garrett, drummer Rob Hirst, and guitarists Jim Moginie and Martin Rotsey – were “very open” to recording new music and supporting causes together in the future (possibly with one-off performances like the one they did for tsunami relief in 2005), the 2022 shows “will be their last tour”.

Moginie is quoted saying that while “we’re still capable of blowing the roof off any stage, and that’s what we intend to do” a lot has happened in the five years since their return. “Much has been achieved and with the passing of Bones, much has been lost, so now feels like were at the end of the cycle,” he said.

But even as Hirst declares, “I don’t look back”, for Australians, there may be a touch of the Farnhams or Nellie Melbas about the announcement.

Nearly 20 years ago, when Midnight Oil had just started their long hiatus, John Farnham announced that he would no longer undertake big arena tours. Though he never retired, nor said he would stop playing or recording, the story became that he’d given up performing – so each time he reappeared, he was unfairly mocked for “doing a Melba” and gulling an audience one last time.

Having had at least one musical and one political “retirement” in their career, not to mention solo projects for all members since 2002, none of this may concern Midnight Oil. After all, as Garrett says in this announcement, “we all know time refuses to stand still for anyone”. Then again, it’s worth noting that Farnham is still playing occasionally.

The Resist tour kicks off in February 2022. Tickets available from Ticketek and Ticketmaster from December 1.