Comedian Michael Rappaport just doesn’t know when to keep his mouth shut. First, he called Pete Davidson and Kanye West "whiney *ss social media babies" on Twitter, and now he’s coming after Ariana Grande on Instagram. Um, are you good, sir? For the record, I’ve always really liked this guy. But Michael Rapaport’s comments about Ariana Grande’s looks are weirdly sexist and kind of creepy. And if you ask me, I think it’s pretty clear who the real whiney *ss, social media baby actually is.

I know, know: No one asked me. Well, too bad because I’mma tell you my feelings about this whole debacle anyway.

The 48-year-old actor — who was in a bunch of 90s movies like Beautiful Girls, Basketball Diaries, and Cop Land, and who also played Phoebe’s boyfriend on a couple episodes of Friends — is getting dragged online in a big way after sharing a throwback pic of the "Thank U, Next" singer with wet hair, zero makeup, and #nofilter.

And if you want to know why women don’t usually post selfies online until they’ve applied at least three different filters, you need look no further then the obnoxious and judge-y caption about Grande’s appearance that Rapaport tacked onto his post.

‪Ariana Grande is 27 acts 12, you take off those boots she hides her legs in, the cat eye make up and the genie pony tale and I think there’s hotter women working the counter at Starbucks no disrespect to Starbucks.‬ ‪New @iamrapaport is now Live

"Ariana Grande is 27 acts 12, you take off those boots she hides her legs in, the cat eye make up and the genie pony tale and I think there’s hotter women working the counter at Starbucks no disrespect to Starbucks," Rapaport wrote.

You know, because he’s a comedian.

So weak, right? First of all, I think Ari looks great without makeup, but that’s beside the point. A 48-year-old man commenting on a woman’s looks who is 23 years his junior — she’s 25, not 27 Mikey, get it right — is just all kinds of creepy. Never-mind the fact that with his ugly comments, Rapaport is basically telling all young woman: Screw talent, your self worth lies solely in your appearance.

And for the record, this isn’t even the first time someone has made a joke involving Ariana Grande and Starbucks so maybe it’s time to step up your game.

Anyway, despite all the backlash, Rapaport hasn’t apologized to Grande as of yet, nor has he deleted the offensive post — which he also shared on Facebook and Twitter for maximum exposure. In fact, he is now calling out the people who are calling him out, by dubbing them "snowflakes," a word non-millennials like to bust out any time someone younger disagrees with them.

Also, if anyone out there knows what "vicioulsy" means please hmu.

Meanwhile, Rapaport is now using all the negative attention he’s getting to promote his podcast on his Instagram story, so either this guy is a serious psychopath or an actual genius. 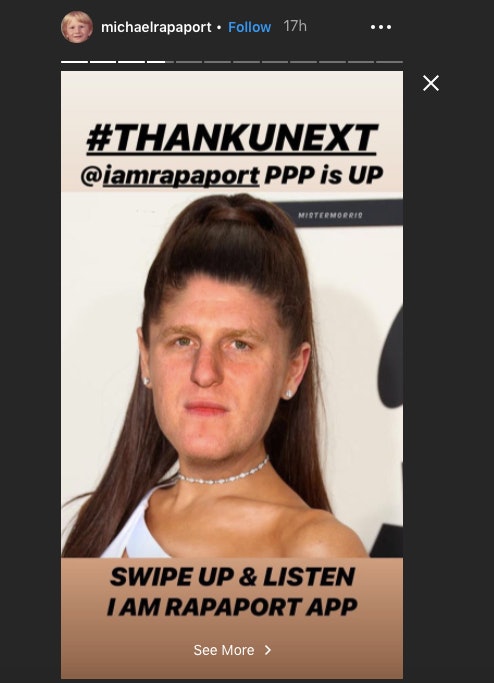 The worst part about the whole thing is that Rapaport’s problematic words have now inspired other Twitter users to mimic his obnoxious behavior and get creative in order to bully the bully.

"Michael Rapaport is 48, acts 14," wrote one. "You take off his baggy shorts, baggy shirt and trainers from the year 2003 and I think there’s hotter men working the counter at Starbucks no disrespect to Starbucks."

"Imagine looking like Michael Rapaport and thinking you have the chops to be giving appearance advice one of the most beautiful talented artists of our time," added another.

And from a third: "Ariana Grande co-founded a charity before she was 12. She organised a benefit concert for the victims of the Manchester bombing just two weeks after the attack, raising $23m for those affected. All 4 of her albums have gone platinum. You were once in Friends and have no eyebrows."

I’m not saying I agree with fighting bullying with bullying, but Rapaport really walked right into these jokes with his nasty Twitter antics.

Now, can we please get back to Googling Ari’s oversized hoodies? TY, next.