Right on cue, the Meghan Markle narrative has shifted from "all hail the star recruit" to "can't do anything right".

This is the bit where the ex-Meghan Markle learns, and we're reminded, one cannot be allowed to get above one's station in the crusty House of Windsor. Also, a woman with her own opinions and a once highly independent, feminist, life must be seen to be yanked into don't-scare-the-horses line.

And not only by the royal family. 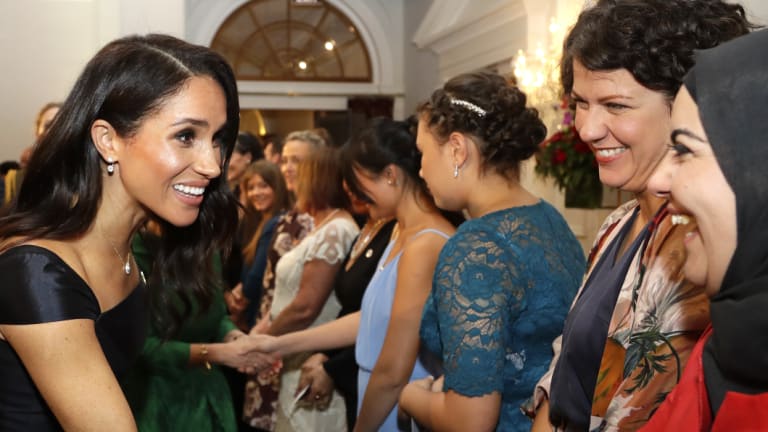 Meghan, Duchess of Sussex meets guests at a reception hosted by the Governor-General celebrating the 125th anniversary of women’s suffrage in New Zealand at Government House in Wellington, New Zealand, in October.Credit:AP Kirsty Wigglesworth

It feels like five minutes since the royals were soaking up the global love for having welcomed a divorced daughter of divorcees – and a thoroughly modern, working, woman of colour – into the bosom of the family.

The mild-mannered Duchess of Cambridge delivering a brood of babes had already boosted the popularity and public image of one of the world's most expensive ornaments (the royal family), but the arrival of Meghan as a forward-thinking, formerly-feisty, campaigner was not only people-popular, it promised to blast The Firm into the here and now.

The fresh royal bio of the Duchess of Sussex borderline-boasted about the social justice activism, including the line: "Aged 11 she successfully campaigned for a company to alter their television advert that had used sexist language to sell washing-up liquid."

Millions of "likes" ensued. Perhaps too many for the comfort of those who had been around long enough to witness how a cult-of-a-royal-wife's-personality can drag the spotlight off the brand.

Of the Sussex marriage, historian and constitutional expert, David Starkey, observed in the Sun: "It's sure changed the Royal Family." 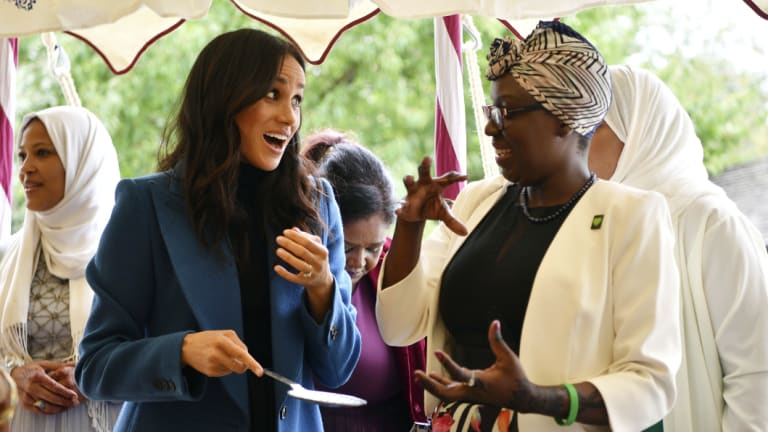 Meghan, the Duchess of Sussex, left, reacts with one of the women behind the cookbook “Together” during a reception at Kensington Palace, in London, in September.Credit:AP, Ben Stansall

The Meghan sunshine beamed out of Britain right to the edges of the former colonies.

Anyone who consumed more than a paragraph of media content in October would have witnessed the unicorn-rainbow of love over Meghan and Harry when they visited Australia and New Zealand. You may have assumed this publicity coup would buy the new Duchess a bit longer in the honeymoon suite in her new home country.

Alas, not so. Once back, the anti-Meghan backlash was swift enough to cause whiplash.

In the last few days, as the weird wave of nastiness directed at Meghan has gathered momentum, the Duchess has been dubbed both "the new Yoko" and "the new Wallis Simpson".

She is around five months pregnant with a new royal family member. She has ditched her hugely-followed social media and blog, her career, her individual voice, her homeland and all other remnants of her past life. She has had to witness her family of origin intruded upon, judged and roasted.

All the while she has thrown herself wholeheartedly into the job of being Mrs Captain Wales.

And still she is being portrayed as the demon interloper whose strong will apparently threatens to break up the band. One, ostensibly up-market magazine, has provided a helpful “exhaustive timeline of Kate Middleton and Meghan Markle’s feud rumours”.

She is, shock, allegedly behind a move to depart Kensington, where "the Cambridges" live, for her and Harry's own place 32km away as she gets ready to have a baby. She is "demanding", we're told – which, like "sharp", translates to "determined" and "has her own opinions" and isn't a doormat.

Sadly for all concerned, Harry's mother was treated like a doormat while still inside the family, which may go some way to explaining why he is said to be firmly in his wife's corner. (Though this, of course, is being interpreted as Meghan having a negative influence over Harry.)

According to the industrialised rumours, via "news" being "leaked" from alleged insiders, the "usually pretty unflappable" Catherine and protocol-outsider Meghan are in the midst of a spat. I can't be the only one who smells a rat.

What is playing out for Meghan, who is exactly the same person as she was when the Queen's grandson fell in love with her, is a pre-emptive, and populist pulling-into-line.

Now the "breath of fresh air for Britain" angle has diminished, and Meghan will imminently join the ranks of sedate, royal mothers; she is being informed in the most graphic way (headlines) that her time in the spotlight for being "a different kind of royal" has passed.

She is being portrayed as the demon interloper whose strong will apparently threatens to break up the band.

For fans of her advocacy for gender equality and girls' rights, seeing Meghan's official bio include "I am proud to be a woman and a feminist" felt like a breakthrough, especially as women around the world began upping calls for respect and equal access to power.

To have Buckingham Palace give approval to a woman who said on the UN platform that "equality… means that a wife is equal to her husband", and that when women don't have a seat at the table of power, "you know what, they need to create their own table" was promising.

How disappointing, then, to see the clear message emerging: "Thanks for the starburst, now do the right, royal thing, be beige, and step into the shade."