Following Kate’s lead? Pregnant Meghan cuts a relaxed figure in a navy dress and signature messy bun for a carol concert – hours after her sister-in-law stepped out in her own casual yet polished look

The Duchess of Sussex put on a relaxed display in a navy dress as she joined Prince Harry for a charity carol service on Tuesday.

Pregnant Meghan swapped her typically glamorous looks for the rather more laid back ensemble as she attended the service at St Lules Church in Chelsea, London.

The figure-hugging number, which could only be glimpsed as Meghan headed for her waiting car, showed off her blooming baby bump.

The mother-to-be, who is expecting her first child next Spring, appeared to be taking a leaf out of sister-in-law Kate’s fashion book, after the Duchess of Cambridge was seen in a similarly casual yet polished outfit for an engagement earlier today. 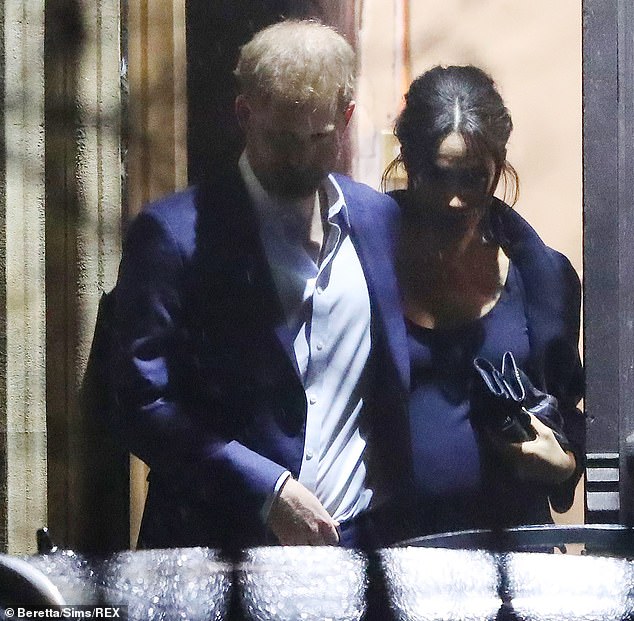 Relaxed: Meghan swapped her typically polished look for the rather more laid back ensemble as she joined her husband Prince Harry at a charity carol service at St Lules Church in Chelsea, London, on Tuesday night. The mother-to-be, 37, donned a figure-hugging navy dress 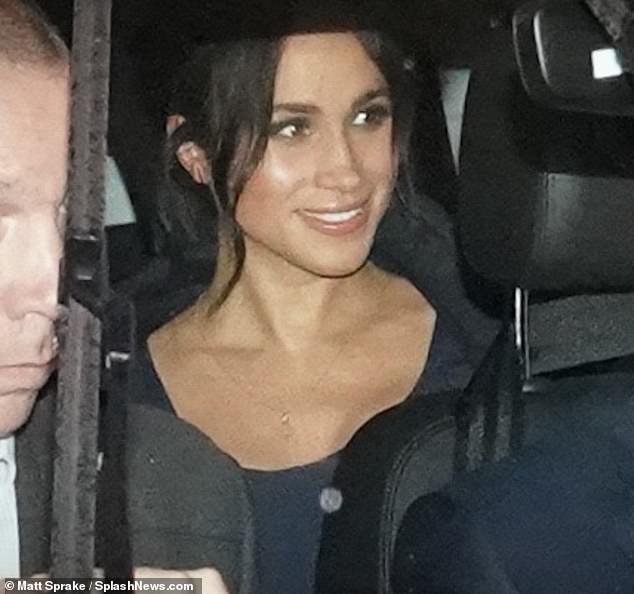 Natural beauty: Meghan wore her hair in a signature messy bun style and opted for natural make-up for the outing, adding to the overall pared back feel of her ensemble 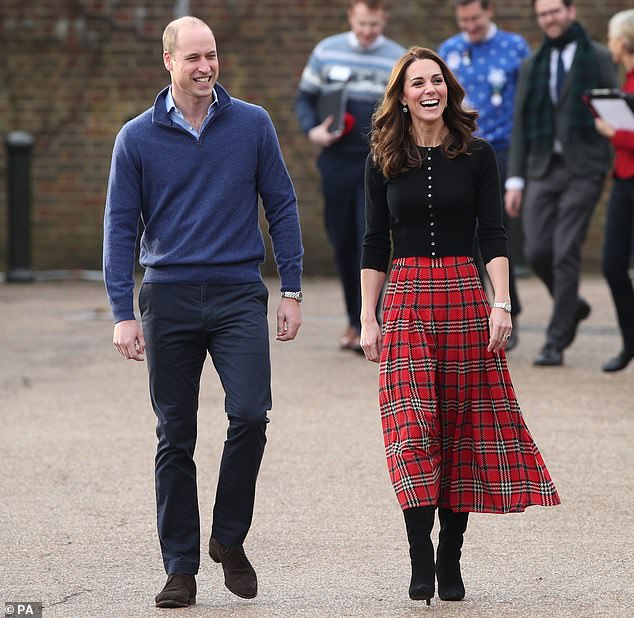 Style inspiration? Meghan stepped out hours after her sister-in-law the Duchess of Cambridge wore a similarly casual yet festive outfit for an engagement earlier today. Pictured, William and Kate arrive for a Christmas party for RAF families at Kensington Palace

The Duke and Duchess of Sussex kept a low-profile as they arrived for the carols.

The event was organised by the Henry van Straubenzee Memorial Fund, which was established in memory of Prince Harry and Prince William’s close friend who died in a car crash in 2002 at the age of 18.

Meghan wore her hair in a signature messy bun style and opted for natural make-up for the outing, adding to the overall pared back feel of her ensemble.

This was further accentuated by the minimal jewellery, with just a delicate gold chain seen on her neck. 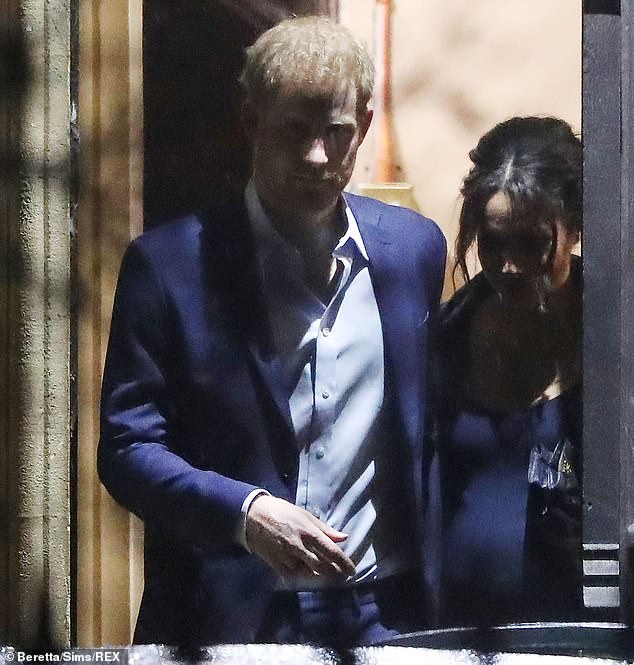 Keeping things simple: Little could be seen of Meghan’s ensemble as she made her way out the side door of the church but she appeared to be wearing a navy dress with a matching coat 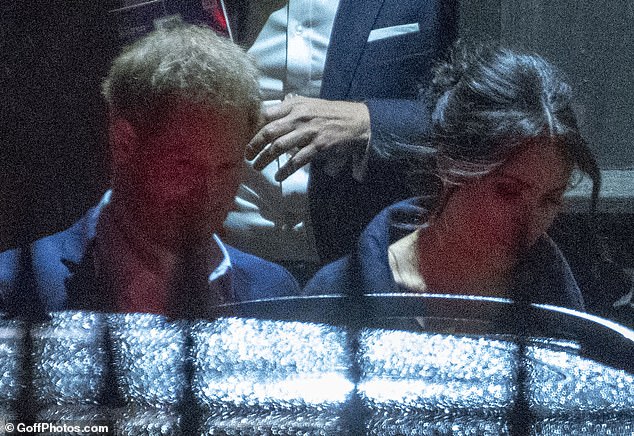 Undone: Meghan brought out one of her tried-and-tested hairstyles – a messy bun with loose strands framing her face – for the charity event with Harry on Tuesday night

The royal wrapped up against the winter chill in a navy coat with a large standing collar and accessorised with what appeared to be a black clutch bag.

Meghan addressed the congregation before leaving the church through a side door hand-in-hand with Prince Harry. The couple left in a chauffeur-driven car.

Prince William’s wife looked festive as she as they threw open Kensington Palace’s doors for a party for families of deployed personnel from RAF Coningsby and RAF Marham. 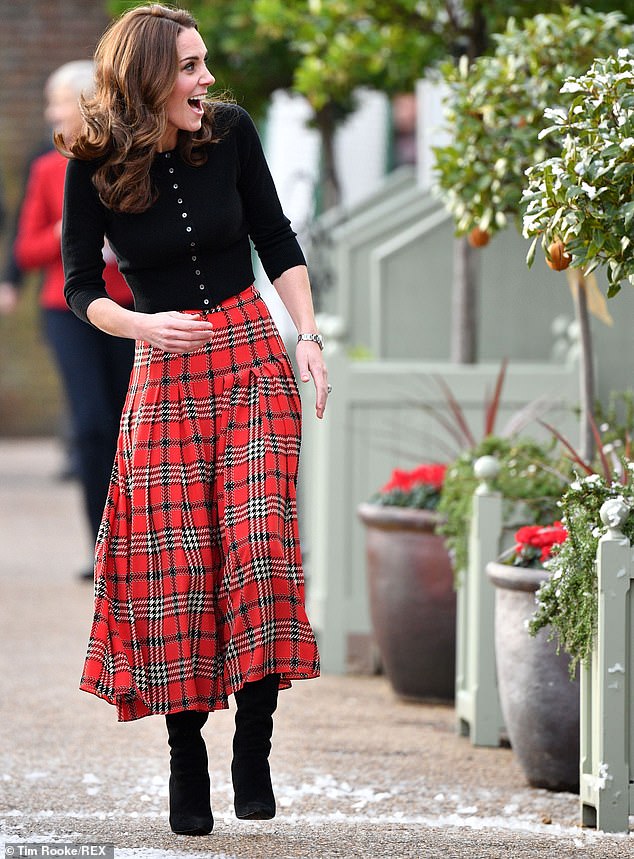 Wardrobe masterclass: Kate looked radiant in a £1,500 tartan skirt and flattering cardigan for her engagement earlier today. It is possible the casual yet polished look inspired Meghan 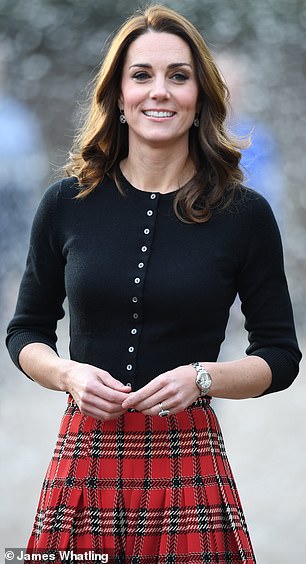 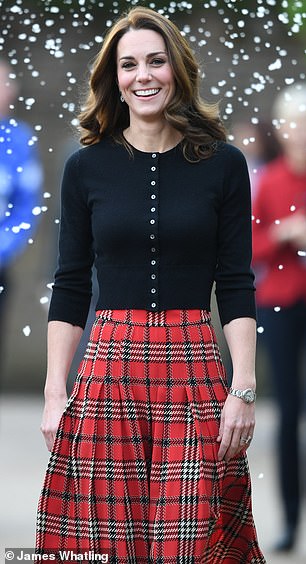 Ready for Christmas! Kate looked relaxed in the tartan skirt from Emilia Wickstead, which she teamed with a cashmere jumper from Brora, for the Kensington Palace party on Tuesday 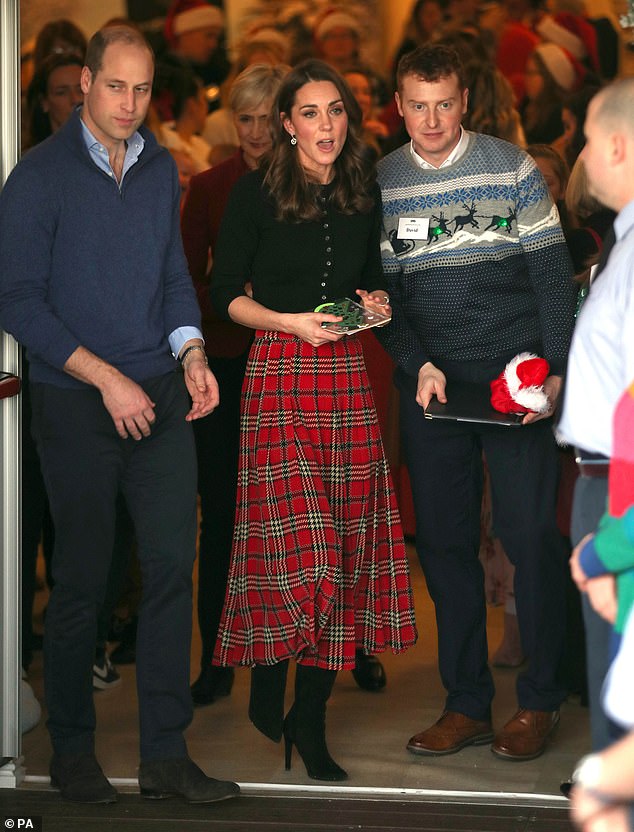 Festive fun! Kate with husband William at the party for RAF families at Kensington Palace

At the party, Kate spoke with 200 wives, husbands, children and parents of men and women from two RAF stations who will be spending Christmas apart from their families while deployed in Cyprus.

The Duchess of Cambridge was even spotted engaging in a faux snowball fight as she made her way to the party.

Kate and Meghan both put on an upbeat display today, brushing off persistent talk of a feud between the sister-in-laws.

Meghan is said to be avoiding negative stories about her as she enjoys her pregnancy without any added stresses.

Happy couple Harry and Meghan are expecting their first child in the spring, and will move to their cottage in the grounds of Windsor Castle in preparation for the new family.