After a nearly two-year wait and many behind-the-scenes ups and downs, Megan Thee Stallion’s long-awaited second studio album will arrive on Friday, August 12.

The 27-year-old rap superstar took to Instagram to share her album art and the upcoming project’s title, Traumazine, with the announcement that it would be available on all platforms in less than 24 hours.

The news came as a bit of a surprise for fans, as Megan had made no prior mention of an upcoming release date prior to news of the album’s release leaking to social media platforms. 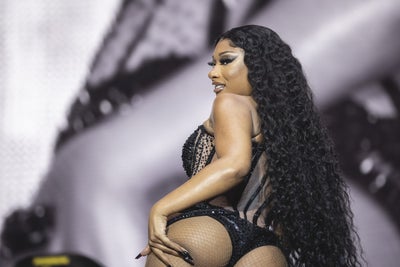 “Y’all know I always have problems with dropping my music under this label since all these games and having to go to court just to put out my art has been so stressful,” Megan wrote on Twitter, referencing 1501 Certified Entertainment, the label she has been signed to since 2018. “Thank you hotties for rocking with me through the bullsh*t. WE ALMOST OUT. LETS STAY FOCUSED AND RUN THIS LAST ONE UP!”

Indirectly, Megan confirmed that this album would be her final obligation to 1501 Certified Entertainment, whom she sued in 2020 alleging that they were blocking her from releasing new music after she had attempted to renegotiate the terms of her contract. Under her current contract terms, Megan receives a 40 percent cut of her album profits, while the label retains the remaining 60 percent, according to Vulture. However, Megan also claims to have never been paid a dime from said profits, and to have been left to pay for her own album promotion out of pocket.

Hinting toward sabotage on the part of 1501 and its CEO, former professional baseball player Carl Crawford, Megan insinuated that early leaks of her latest album’s art and snippets of unreleased songs had come from her label.

“From my cover art, pieces of my track list, and me even hearing a part of a song I haven’t dropped yet leaking (and we ALL know who the only ppl who had access to all these PRIVATE links are) I might as well…lol,” she wrote in a follow-up tweet.

Traumazine‘s cover features an artful triple exposure of Megan’s face in varying expressions, pictured in black and white. She also shared the album’s tracklist, exciting fans with a tease of collaborations with fellow rappers Latto and Rico Nasty, as well as soul crooners Jhene Aiko and Lucky Daye, among others.

Megan’s debut album, 2020’s Good News, went certified platinum. It peaked at #2 on the Billboard Hot 200 list and #1 on the R&B/Hip Hop lists, driven by hit singles like “Body,” “Cry Baby,” and “Don’t Stop.” Her follow-up album, 2021’s compilation Something for Thee Hotties delighted fans as it featured a return to her raw and raunchy freestyle roots, compiling many of her most beloved YouTube freestyles and unreleased tracks as a “thank you” to her loyal fanbase. It debuted on the Billboard charts at number 5, becoming the rapper’s 4th top-ten debut album.

Megan’s most recent singles, “Plan B,” and “Pressurelicious” featuring future have the hotties on the edge of their seats in anticipation of what the self-proclaimed Hot Girl Coach has in store.

Traumazine will be available to stream and purchase on August 12.