LEO MCKINSTRY: Left-wing lawyers fighting Boris Johnson’s Rwanda migrant plan think they are so virtuous. But the truth is they have blood on their hands

Human rights lawyers and campaigners are fond of posing as the champions of compassionate morality. Idealists driven by nothing more than the pursuit of the public good.

Yet by their self-serving, destructive actions, they all too often make a mockery of justice and humanity.

Behind all their shrill rhetoric about the rule of law and the protection of the vulnerable, what they really seek is to impose their political ideology — even against the will of the British public — through the ruthless exploitation of our ramshackle legal system. These ideologues care nothing for our national interests, only for the triumph of their dogma and the humiliation of the elected government. 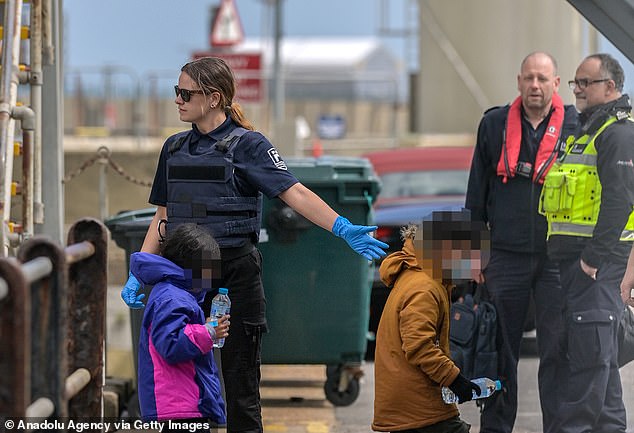 On few occasions has this agenda been more clearly demonstrated than by their appallingly irresponsible stance over the recent surge in illegal crossings of the English Channel, organised by people traffickers. Last year, the number making the hazardous journey reached a record 28,500, and this year 7,400 have already reached our shores by this route — 700 in just three days this week. 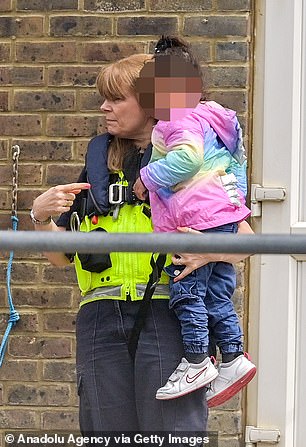 Action is desperately needed to tackle this illicit trade, not least because of the risks posed by taking to the open sea in small craft that are often dangerously overcrowded — more than 300 migrants are estimated to have died as a result of sinkings in the Channel since 1999.

It is also intolerable for a nation to have a vast, illegal immigration sector run by criminal gangs, where preferment depends on cash rather than a genuine need to reach a safe haven.

To its credit, the Tory government has come up with a bold, imaginative scheme to combat this vile trade, the architect of which has been the tough-minded Home Secretary Priti Patel. With the aim of breaking the gangs and deterring the migrant boats, she has reached a deal with the African republic of Rwanda, whereby some asylum seekers will be sent there rather than having their claims processed in Britain.

But before Ms Patel’s plan could even start to be enacted, the Left-wing lawyers and professional agitators have gone on the offensive, wheeling their artillery of legalistic obstructionism into position.

Already an alliance made up of the pressure groups Care4Calais and Detention Action, along with the Whitehall PCS union, has written to the Government to express its concern about this ‘reprehensible plan’. Not that it embarks on such an action without legal help.

Step forward the law firm Duncan Lewis, which — with its army of more than 350 solicitors and consultants — boasts that it is ‘the largest provider of publicly funded (legal aid) services in the UK’. 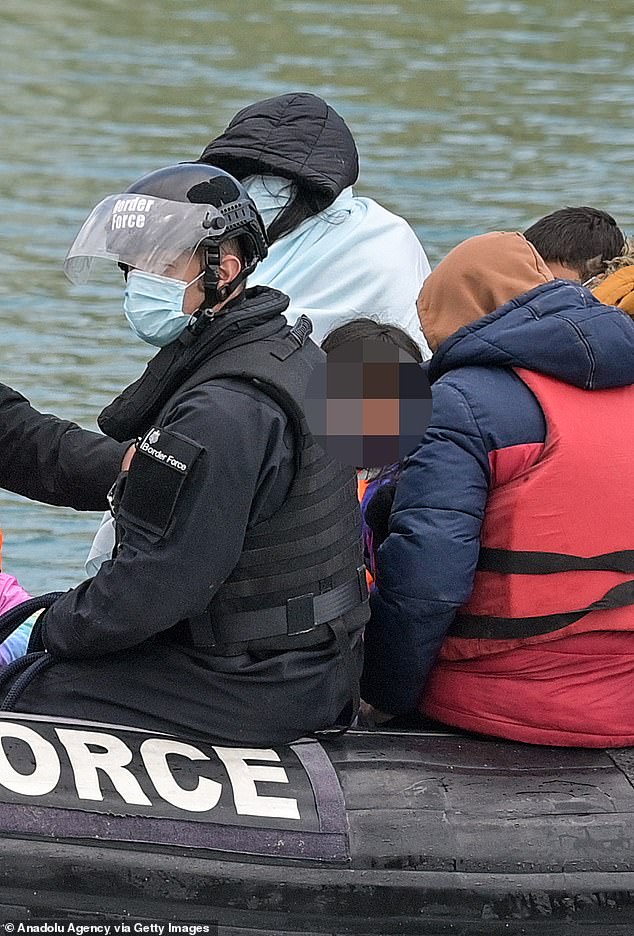 The group’s letter marks the formal start of the process leading up to a judicial review challenge, which could result in Ms Patel’s policy being overturned by the courts.

In a parallel move, the high-profile solicitors Leigh Day, acting for the charity Freedom From Torture, has written a pre-action letter, voicing its ‘serious’ anxieties about ‘the lawfulness’ of the Government’s approach.

The nexus of progressive lawyers and protesters now gleefully contemplates months of legal paralysis before ministers are forced to back down. 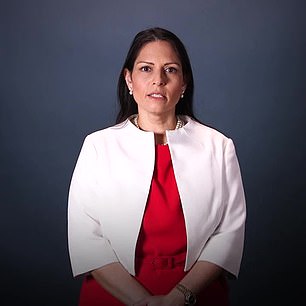 But their conduct is a disgrace on so many levels. For a start, by trying to block any crackdown on the illegal racket in the Channel, they are effectively colluding with the criminal gangsters. They rage against the inhumanity of the Home Secretary and the Prime Minister, but they have blood on their hands through their support for the trade in human cargo.

In truth, they might be called the political wing of the trafficking movement.

They think of themselves as virtuous, but where is their fairness to other migrants who try to follow the correct procedures and apply through legal routes?

Nor do these parasites show any respect for democracy. By overwhelming majorities, the British people have shown that they want tougher immigration controls and more rigour in the policing of the Channel. Indeed, that is partly why the Brexiteers won and the Tories gained a resounding victory at the last General Election.

But in liberal metropolitan circles, the fashionable woke agenda counts more than the verdict of the ballot box.

Yet there is a profound dishonesty and hypocrisy about the smugness of the open-border brigade. In their relentless assault on the Government, one of their favourite weapons is emotional blackmail.

They constantly tell us that the Channel boat migrants are desperate refugees fleeing for their lives from persecution. But this is pure deceit. These migrants are already living in France, one of the safest, most prosperous and tolerant countries on Earth.

Moreover, despite all the heart-tugging propaganda, the vast majority are fit, single men, not families including women and children. There is also the perversity of hearing Left-wingers, who usually love to extol the virtues of every foreign culture, suddenly deciding that Rwanda is a nightmarish hellhole unfit for human habitation.

So keen to denounce others for supposed prejudice about Africa, they themselves wallow in crude, negative stereotypes about the republic when it suits them. 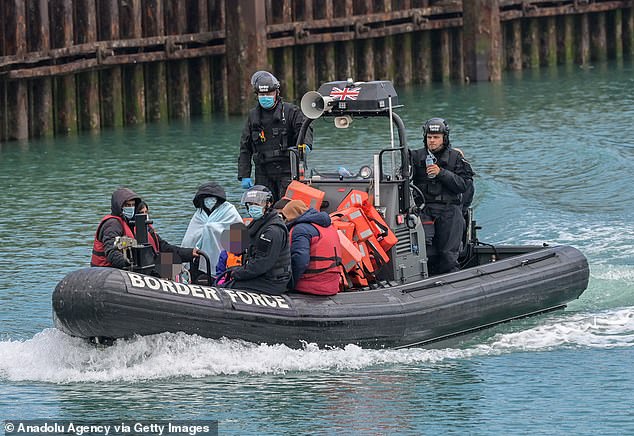 They obsess about ‘decolonising’ Britain’s heritage, yet they now act like the grandest of colonialists when it comes to the Government’s Rwandan plan.

What is the Rwanda scheme?

What is the scheme?

The Government announced plans to send thousands of migrants to Rwanda, in east Africa, last month.

The scheme is designed to deter economic migrants by showing even if they reach the UK, they’re not allowed to remain here.

When they arrive in Rwanda, asylum seekers will have their claims processed and if approved, will be allowed to stay in Rwanda. They will not be allowed to return to the UK.

Those who fail in their asylum applications will be deported back to their home country.

People arriving in the UK illegally, including in small boats and lorries, will be considered for relocation to Rwanda.

It will apply to anyone who arrived in the UK from January 1, this year, and not just people arriving after the first flights have been arranged.

Ministers have said the scheme is meant to be focused on single, young men, but anyone regardless of sex is eligible.

The Government says families will not be broken up and unaccompanied children will not be sent.

How much will it cost?

The Government says the scheme will cost £120 million, but critics have predicted it would cost considerably more.

Think tank the Institute for Public Policy Research pointed out that Australia’s scheme has cost taxpayers around £5.2 billion since 2013.

Conservative former minister Andrew Mitchell said housing asylum seekers at the Ritz hotel would be cheaper, putting the figure at £2million per person, per year.

When will it start?

Boris Johnson said he wanted the first flights to leave at the end of May, but this looks unlikely to happen.

The scheme is likely to be challenged in court by human rights lawyers, but ministers believe it is legal under UK and EU laws.

Why is it so controversial?

Human rights groups, opposition MPs and backbench Tories have said the plan is cruel and expensive.

Amnesty International says there are concerns over enforced disappearances, allegations of torture and excessive use of force’ in Rwanda.

The Government says Rwanda is a safe country with a track record of supporting asylum seekers.

Opposition leader Keir Starmer branded the PM ‘desperate’ and said the plans were ‘unworkable, extortionate and will cost the taxpayer billions of pounds’.

If the Home Secretary had used some of the language deployed by her opponents, she would have been condemned for vicious racism.

Laughably The Guardian newspaper, the bible of the liberal lawyers, has carried articles on its travel pages that urge visitors to ‘sample delicacies’ from Lake Kivu in Rwanda or enjoy an ‘affordable safari’ that offers ‘great game-viewing without the super-high price tag’.

But what is good enough for Guardian-reading tourists is clearly not suitable for Calais migrants. The tragedy is that the lawyers and their conspirators may well succeed. Already the Government is talking about months of delays in implementing its scheme.

Time and time again over recent decades, deportations have been thwarted by judicial wrangling, especially since the passage of the Human Rights Act in 1998 by the Labour government of the time. When John Reid, as Home Secretary in 2006, tried to deport the Afghans who had hijacked a plane and made it land at Stansted, he was blocked by the courts.

This was a decision that Tony Blair rightly described as ‘an abuse of common sense’, but it was Blair’s own legislation that was in part to blame for this outcome.

In the same vein, last August a charter flight was due to carry 50 deportees to Jamaica, but legal challenges meant that only seven made the flight. Of the 43 that remained behind were two murderers and a child rapist.

And in 2018 a bunch of virtue-signalling passengers prevented the deportation to Turkey of Somalian Yaqub Ahmed, who had taken part in a gang rape of a 16-year-old in 2007.

‘How could you defend a rapist? Who are you to interfere with justice?’ his victim rightly asked when she learnt of the failed bid to remove her attacker from Britain.

What makes the antics of the lawyers even more offensive is the fortune that they can rake in from their opposition to the Government.

In the extreme case of notorious hate preacher Abu Hamza, it is estimated that in total £25 million was spent on his case as 15 attempts were mounted to prevent his extradition to the U.S.

Indeed legal aid, which was originally conceived of as a means of enabling British people to achieve justice, can now act as a fund for political activism and the denigration of British rights.

Perhaps the worst example of this trend was the conduct of Phil Shiner, the energetic Left-wing solicitor who headed the firm Public Interest Limited. Buttressed by colossal sums of legal aid — reportedly as much as £5 million — along with £2.3 million in payments from the Ministry of Defence, he led a long crusade against the British Army in Iraq, producing a formidable catalogue of more than 3,000 allegations of abuse, even murder, by our soldiers.

But the charge sheet was a farrago of lies. Not a single prosecution resulted from his lurid claims. Shiner, once garlanded as a legal hero, was eventually struck off in 2017.

But the greed, disdain of the truth, and contempt for our national integrity remains. So does the exorbitant cost of legal aid, which has just seen an increase of 15 per cent to £1.2 billion. Some of that money is now bankrolling the campaign for open borders.

We all have to pay the price for their wrecking tactics in the form of issues such as overcrowded schools, NHS waiting lists and housing shortages.

The acid of their self-righteousness is corroding our civilisation. 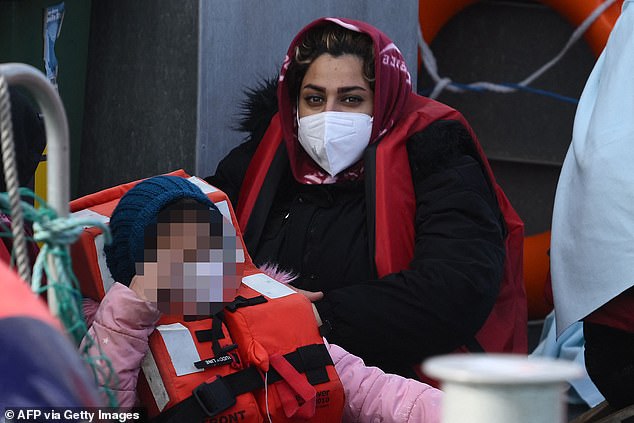 A migrant woman is picked up at sea and taken to the Marina in Dover on May 3, 2022