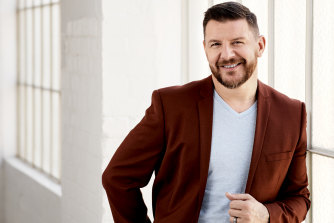 I get fan letters from women. They say they love me, want to marry me, or want me to cook for them. Credit:Nicholas Wilson

My mother, Evelyne, had me when she was 18. Two years later my sister, Gaëlle, was born. My father, Patrick, left when I was four, so she pretty much raised us as a single mum.

My mother always said there were three rules for life: don’t steal, don’t lie, and work hard. These are still the most important parts of my life.

I was an angry little kid because I wanted better things for my family. Mum worked full-time in an electrical goods store and we tried to do the things society asked from us. But we struggled and I didn’t understand why.

I inherited my work ethic from my mother. Something I wish I didn’t get from her is my temper, as she is very good at losing hers. But you can’t only get the good things.

Mum retired four years ago and lives in the house I bought for her in France. She can relax now and not worry about the electricity bill.

I wasn’t interested in school, so when I was 15 I worked in my father’s bistro for a year. I love food and enjoyed the long hours. That’s when I knew I wanted to become a chef.

My first kiss happened before my two-year cooking apprenticeship in my hometown of Nantes. I was 15, and in the summer holidays I worked at a restaurant in the countryside. The female chef was a lot older than me and we kind of got on with it. It only lasted a couple of weeks. I thought
I was in love but I wasn’t.

I moved to London when I was 18 and got a job at the Café Royal. The next year I met a British woman who was 26. She was studying law and could speak French and Spanish. We had a lot of fun but a lot of fights as well. The relationship lasted around four years, longer than it was supposed to, because I cared too much about her feelings and not enough about me.

I met Veronica Morshead, the mother of my 15-year-old son Jonti, in London. She was also a chef and we spent a lot of time together in the kitchen. She was sharing a flat with some girlfriends and I needed a room, and so it just happened. We dated for five months before I left to come to Australia.

She said she wouldn’t stop me, but as my departure neared she asked if I minded if she joined me later. I didn’t. But when she arrived she became homesick and our relationship became difficult. We spent 12 years together and, without being negative, they were not the best 12 years of my life.

When I met my wife, Clarissa Weerasena, I was not looking for a relationship. But she was beautiful and she loved cooking and eating – when we started dating we’d go to restaurants five nights per week. We also did romantic stuff, like taking a seaplane over Rose Bay in Sydney.

One day, she told me how she felt. I became scared and so we split up. We didn’t see each other for a few weeks. But I realised I was making a mistake to let this amazing woman go, so we decided to live together and became close very quickly.

Our little girl, Charlee, was born three years before we got married in 2018. Marriage wasn’t important to Clarissa or me, but we did it because Clarissa’s mother wanted to see that piece of paper.

Trust is number one in our relationship. I don’t look at other women – Clarissa is the one I love
and I want to spend the rest of my life with her.

In my professional life, I only work with women: they work harder and are more dedicated and focused than men. My agent is a woman, as is my business manager and PA – and my wife is part of my business, too. They don’t complain; they get the job done.

I get fan letters from women. They say they love me, want to marry me, or want me to cook for them. I appreciate their letters but it’s strange. I am only being me, and if you ask my wife, I am far from being the perfect man.

MKR: The Rivals premieres Sunday at 7pm on Channel Seven.

This article appears in Sunday Life magazine within the Sun-Herald and the Sunday Age on sale February 2.