Manchester mother, 32, loses the ability to walk, talk and SEE on day two of her dream Caribbean holiday after being struck down by a ‘mystery’ brain infection

A mother was left unable to walk, talk or even see after being struck down with a serious brain infection on her dream Caribbean holiday.

Cathrine Ndlovu, 32, from Manchester, flew  out to the Dominican Republic with her elderly mother Musa, aunt Tendai and eight-year-old son Brodie, when she was struck down with the mystery illness on her second day.

After being misdiagnosed several times while she was away, Cathrine, who works as a Border Force Officer worker at Manchester airport, flew back to the UK, where she was told she had a life-threatening condition called rhombencephalitis.

The mother-of-one spent months in intensive care but while the brain infection has now gone, she remains in hospital as she recovers from the brain damage – and is now learning to walk and talk again. 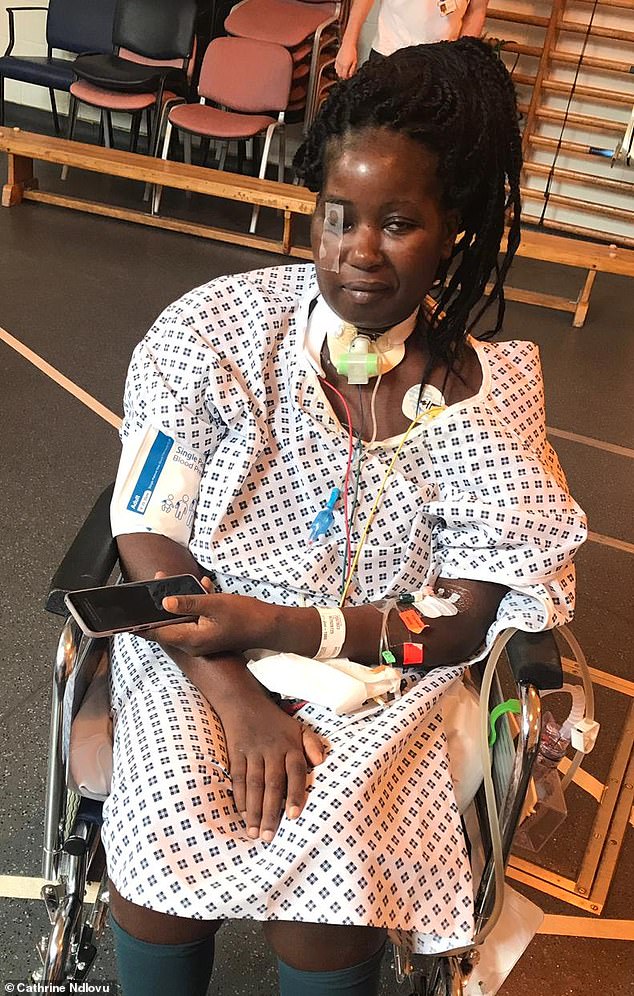 On returning to the UK, Cathrine was admitted straight to hospital where she was diagnosed with a life-threatening brain stem infection known as Rhombencephalitis 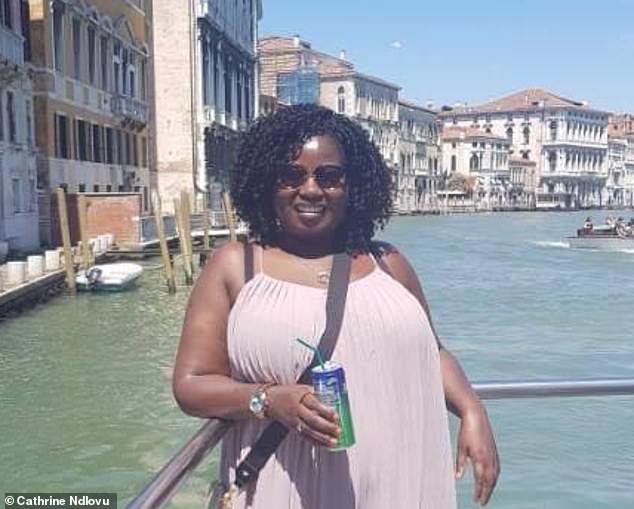 At first, doctors thought the mum-of-one needed her wisdom tooth removed, but as the days passed, her condition quickly deteriorated

When Cathrine first started experiencing painful symptoms including severe earaches and headaches on day two of her holiday, she decided to visit the local doctor.

There, she was told her wisdom tooth was the cause of the pain and she was advised to have it taken out at the hospital.

‘The next day Cathrine was still very sick and started to lose her eye sight,’ explained her friend, Kelly.

‘Cathrine thought this was a side effect from the medication and persevered with the pain, but as the pain got worse and her eye sight still hadn’t returned, she went back to the hospital where they ran various tests on her.

A few days later she was told she had suffered a stroke and had Multiple sclerosis.’

‘She lost control of her right arm and had no sight in her right eye, but was still discharged from hospital three days later and told she would be fit to fly home on her booked flight eight days later. 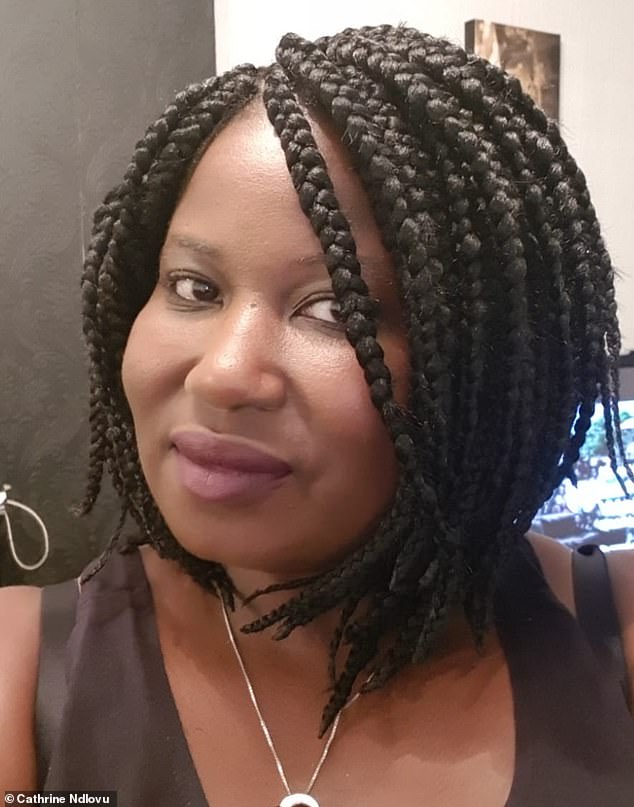 Cathrine Ndlovu, 32, from Manchester, was on holiday in the Carribean with her mother, aunt and eight-year-old son when she was struck down with the mystery illness on her second day

‘Incredibly the hospital also stated that she did not need any medical assistance to return home on the eight-hour flight.’

To make matters worse, when Cathrine was discharged she was asked by the hospital to pay £6,000, on top of her initial hospital fees.

Unable to fly home straight away – as there were no direct flights available which would’ve offered the medical support she felt she needed – Cathrine had no choice but to stay in her hotel room for the remaining eight days.

‘On the day Cathrine returned home, she had no eye sight, had not drunk or eaten for one week, was unable to swallow and could not walk,’ explained Kelly.

‘However, being the true fighter she is, Cathrine was determined to get home with her eight-year-old son and by a miracle survived the flight.’ 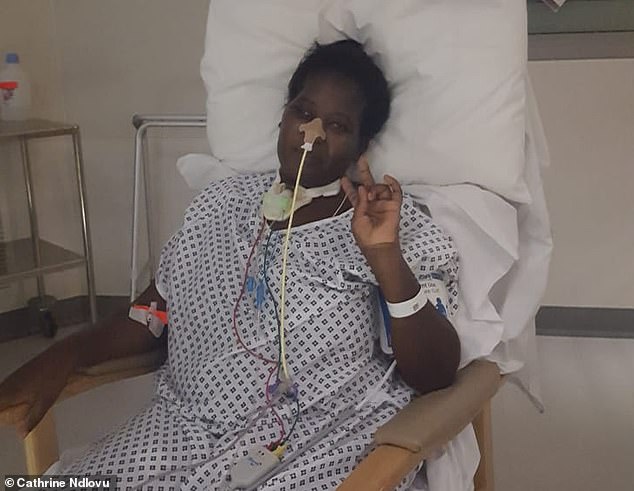 After months of treatment, Cathrine is now able to walk and is working towards swallowing and regaining her full eye sight and the use of her arm

Back in the UK, Cathrine was admitted straight to Manchester Royal Infirmary where her family was informed that she had a life-threatening condition that was rapidly progressing.

While doctors confirmed she hadn’t suffered from a stroke, nor did she have MS, they explained that she had somehow contracted a serious, rare, brain stem infection called Rhombencephalitis, which had been left untreated for two weeks.

The mother-of-one was was put in a medically induced coma and doctors began her treatment.

Cathrine remained in Intensive Care for two months and while her infection has gone, she is still in the ward recovering from the damage caused to her brain today.

Miraculously, Cathrine is now able to walk and is working towards swallowing and regaining her full eye sight and the use of her arm. 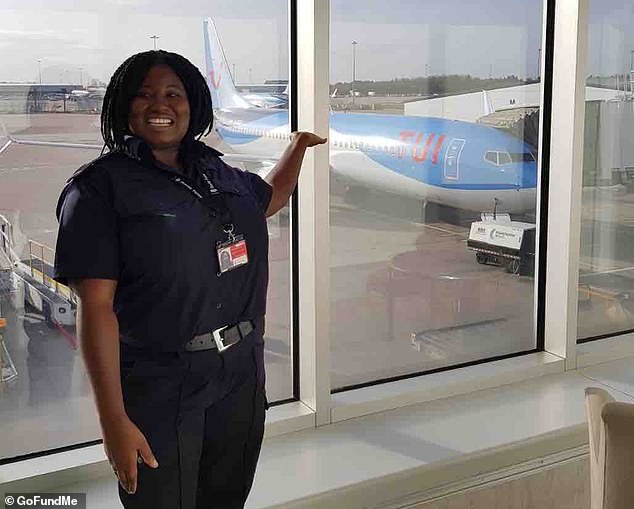 Still in recovery, Cathrine has been off work since August 2018. Close friends and family have now launched an urgent GoFundMe campaign to help with her financial status

But as a result of her illness, she has been off work since August 2018.

Unable to return to her job a Border Force Officer, Cathrine’s close friends and family have now launched an urgent GoFundMe campaign to help her financially until she can return to work.

‘Work has been amazing; colleagues and friends have visited and even come up with the GoFundMe fundraising idea for me,’ said Cathrine.

‘I’ve had so much support it’s been wonderful, but I really want to get to Salford Neuro Ward now and take the next steps on the rehabilitation journey.

‘I’m determined to be home by Christmas and reunited with my son. Thank you so much for all you help it’s very much appreciated.’