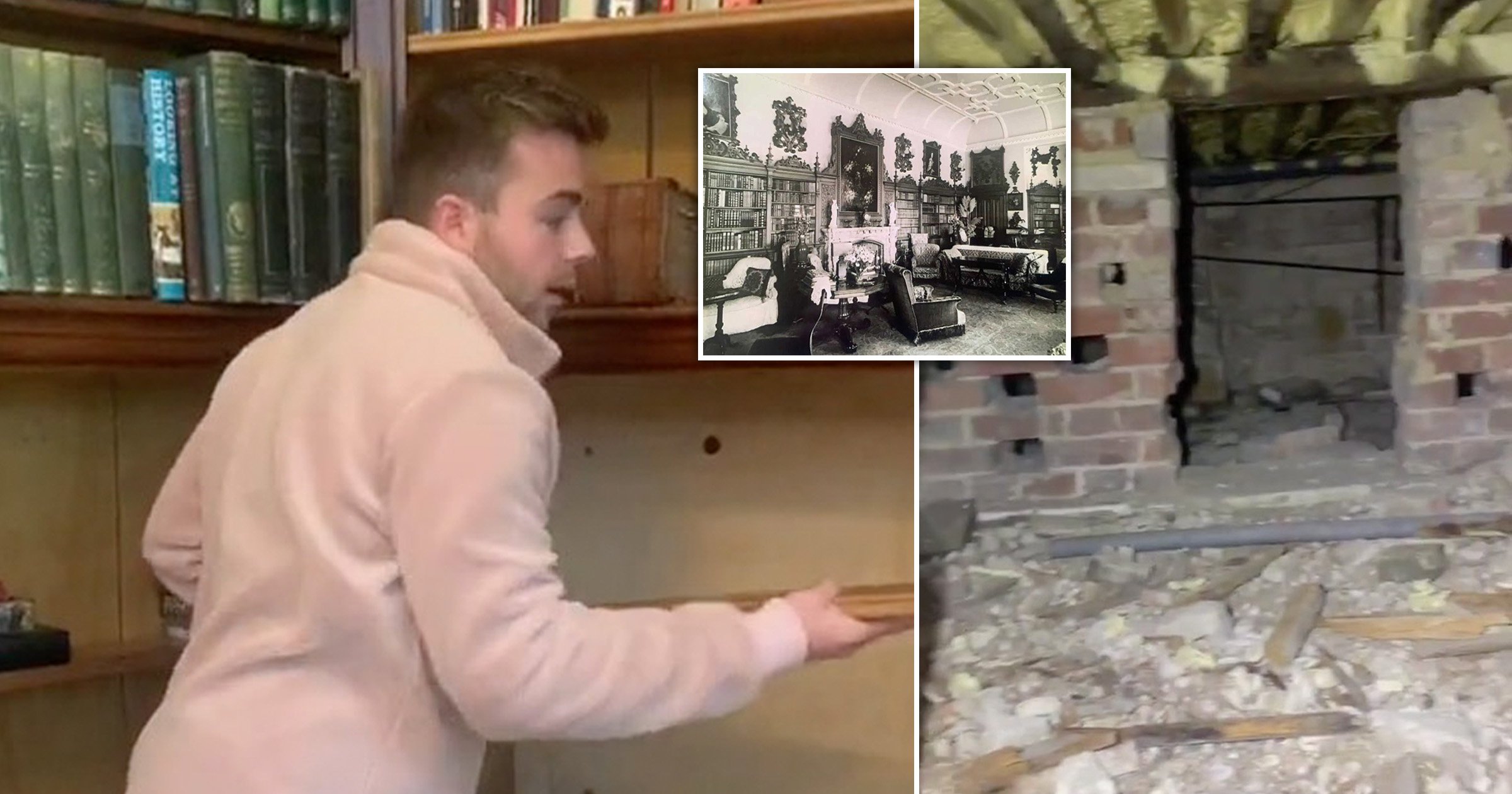 A man was stunned to discover a network of concealed tunnels and rooms underneath his home, after finding a secret door behind a bookshelf.

Freddy Goodall, 23, from Sussex, made the finding while sifting through old photos of his 500-year-old family home. He believes the tunnels were secret passageways used by servants in the 1800s.

In one of the images, the property developer pinpointed a doorway in the library, which was added in the 19th century.

However, Freddy failed to see the same doorway in the room now.

‘I searched for it but couldn’t see anything at first, then realised it was hidden behind a bookshelf,’ he explained.

‘Eventually behind one of the books, I found a hole that looked into the hidden room.’

In a TikTok video, Freddy is seen clearing the books off the shelves and removing the screws on the front-facing wooden panel.

In the clip, which has been viewed more than 4.5 million times, he lifts the panel away and discovers a dark, empty room.

Noticing another panel on the floor, he removes it and finds a secret passageway leading to underground rooms.

Meanwhile, Freddy also stumbles across a ladder leading to another room above, and when he climbs up, he finds an even larger room filled with cobwebs, dust and a huge wasp’s nest.

In there, he finds steps across the room, which lead him to another passageway.

In a second video, he investigates further and climbs down the passageway to the basement where two more secret rooms lead to even more passages.

In addition to this, he located a corridor with stairs leading up to a blocked exit.

After finding several more hidden crossings, he now believes they were used by servants to get around the property unnoticed by the landlord.

A brick wall with mysterious names and dates written in chalk was also uncovered in the hunt.

And in one of the rooms, Freddy found an old safe that looked like it had not been touched for years.

He broke it and unearthed books dating back to 1848 filled with information about the house and some letters.

Old school books and desks used in the 1900s when the property was an educational institution were also among the hidden treasures.

‘I was excited to find something new in a house I have lived in for so long.’ Freddy said.

‘It was pitch black so it was very creepy at first!

‘I believe they were servant passages that ran under the house and they used this to get back and forth from their quarters without being noticed.

‘Some of the underground rooms have been built over the top as one has flagstones which we believe is where they kept the horses.

He continued: ‘I left the rooms as they were, I like that they have been the same for hundreds of years, there is so much history to be found in each room.’

Send us an email at [email protected]