The man accused of raping former political staffer Brittany Higgins has pleaded not guilty in court.

Bruce Lehrmann did not appear himself in the ACT Magistrate’s Court on Thursday morning but his lawyer, Warwick Korn, told the court he had been “instructed to enter a plea of not guilty”. 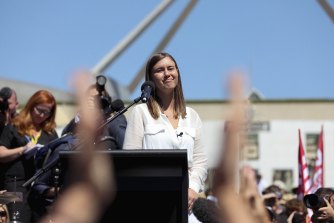 Former ministerial staffer Brittany Higgins at a rally in Canberra in March.Credit:Dominic Lorrimer

Magistrate Beth Campbell clarified: “That’s to the allegation that on the 23rd of March 2019 your client engaged in sexual intercourse with Brittany Higgins without her consent and was reckless as to whether she had consented.”

Ms Higgins went public with the allegation in February, sparking a national conversation about the treatment of women and their involvement in politics.

She and Mr Lehrmann both worked for minister Linda Reynolds at the time of the alleged assault.

ACT director of public prosecutions Shane Drumgold told the court the brief had already been handed over to Mr Lehrmann’s lawyers. However, Mr Korn said his understanding was that had been only a partial brief and both sides would now make sure what they had “lined up”.

He asked for a four-week adjournment after which the matter would be sent to trial in the ACT Supreme Court.

Magistrate Campbell said Mr Lehrmann would have to appear himself at the next hearing, although it could be via video link.

The matter was adjourned to October 14.