The bad, the bold, the historic: Six decades of big Logies moments

The Logie Awards, writ large in the annals of bad hairdos and sometimes startling frock choices, have a history peppered with memorably strange moments – like the time American actor Michael Cole said “shit” on national television.

This isn’t an exhaustive list of the most memorable moments from the Logies, but once you sweep aside the regulars – Bert Newton and Muhammad Ali, Andrew Denton on James Packer’s lap – what is left is a mix of the strange, surreal and occasionally heartfelt. 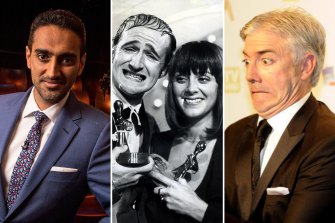 Waleed Aly, Norman Gunston and Shaun Micallef have given us some of the more memorable Logies moments over the years.Credit:

1962: Lorrae Desmond is the first woman to win the Gold Logie. Read more

1973: Hollywood actor Glenn Ford, a conservative Republican, refused to sit next to Mannix actress Gail Fisher because she was black. Read more

2006: Joan Rivers goes wildly off script, or does she? Read more

2016: Tim Minchin’s acceptance speech after winning the Logie for outstanding supporting actor for his work on The Secret River. Read more

Who will win the Gold Logie tonight?

The Gold Logie is the biggest award of the night, with one celebrity awarded the gold statue for officially being named the most popular personality on Australian television. The competition is particularly fierce this year, with seven successful TV stars up for the gong. Who will win? 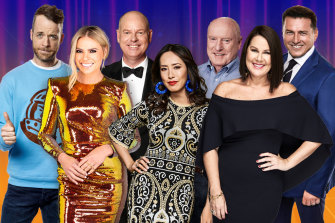 Everything you need to know about the 2022 Logie Awards

It’s bewildering to think that the last time the Logie Awards were on COVID wasn’t a thing, RAT was a rodent not an acronym, and “iso” had yet to enter the national lexicon.

The 62nd TV Week Logie Awards will take place tonight at Queensland’s Gold Coast Convention and Exhibition Centre, and a fair bit has changed since we last celebrated TV’s night of nights. Here’s what you need to know. 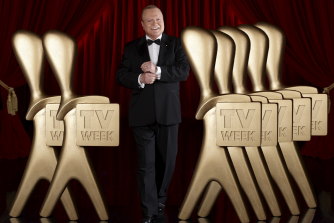 The Silver Logie for most popular presenter has been renamed the Bert Newton Award to honour the late, great Bert Newton.

Who is eligible after the two-year break?

Given the sheer length of time between the upcoming Logies and the previous awards, organisers decided on a slightly extended cut-off date for eligibility.

For any host, actor, actress or program to be eligible for nomination, their work or the show had to air between January 1, 2021 and March 31, 2022, except for the category of outstanding sports coverage, which covers the period from January 1, 2021 to March 14, 2022.

Unfortunately for programs that aired throughout 2020 and the actors that starred in them or the talent that hosted them, they are ineligible for nomination.

What time does it start?

The action from the red carpet and awards show will be broadcast on Nine and streaming on 9Now (Nine is the publisher of this masthead). Red carpet coverage kicks off at 7pm and is being hosted by Leila McKinnon, David Campbell and Renee Bargh, while the awards begin at 7:30pm.

Any changes we need to know about?

Yes, there are a few, actually. The Silver Logie for most popular presenter will be renamed the Bert Newton Award to honour the late, great Bert Newton, who sadly passed last October. The award will be handed out by Bert’s wife, Patti.

The Logie Awards have also introduced a brand-new award, a Silver Logie for most popular Australian actor or actress in an international program. The award acknowledges the significant number of Australians making their mark across the globe in international hits. This year’s nominees include Succession star Sarah Snook and Murray Bartlett from The White Lotus.

Welcome to our coverage of the 2022 Logie Awards 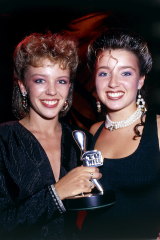 Three Aussie icons: while we wait for today’s photos to roll in, a throwback to Kylie and Dannii Minogue with Kylie’s silver Logie (for most popular actress) in 1987.Credit:TV Week

Good afternoon and welcome to our coverage of the 2022 TV Week Logie Awards! After a two-year hiatus, we’re able to once again celebrate the best Australian TV has to offer – as well as take in the frocks, shocks and unexpected moments that will inevitably emerge.

Today, we’ll have reporters Karl Quinn, Meg Watson, Michael Idato and Thomas Mitchell keeping you up to date with all the happenings across the broadcast (from 7pm on Nine) and on the ground at the Gold Coast Convention and Exhibition Centre. Fashion editor Damien Woolnough will take us through all the need-to-know details from the red carpet.

We’ve also got event details, winner predictions and a look back at the wildest moments in Logies history to come, so follow along here to make sure you don’t miss a thing. And let us know what you think of the wins, losses and excellent ensembles in the comments!