When the time came for the man Labor hopes will be its next prime minister to be welcomed by one of its living legends, things got a little awkward.

Should we shake hands or should we hug? Amid the blaring music, camera flashes and sea of grinning faces, neither Paul Keating nor Anthony Albanese seemed quite sure until they finally came together in tentative embrace. 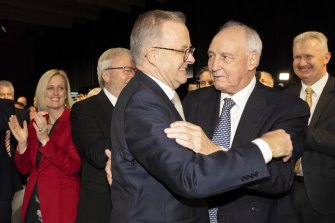 It was no more than a moment’s hesitation in an otherwise carefully planned and well delivered campaign launch but it sums up where things sit at the halfway point of this campaign.

Only the most passionate Labor supporters would give up a glorious Sunday in Perth to go to a football stadium where no game was playing and spend an hour inside a windowless function room listening to political speeches.

Even among these truest of believers, there is lingering doubt about whether Albanese can bring this one home. As one hardened campaign warrior explained as we were waiting the leader’s arrival, the party is still heart-broken about what happened three years ago. It dares to dream – just not for too much.

The twin themes of the Labor campaign were hammered by every speaker who took the stage: the current PM isn’t up to the job and Labor can do better.

Penny Wong, deriding the “rabble that masquerades as a coalition”, said Australia should have a government as decent as its people. Jason Clare declared Scott Morrison all tinsel, no tree.

“Nothing about this bloke is real, except his ability to let you down,” he said.

West Australian Premier Mark McGowan said the Liberal Party’s preference deal with Clive Palmer, the mining billionaire who tried to force open his state’s borders at the height of the pandemic, was “an insult to every Australia and especially, every Western Australian.” Labor is hoping that the popular premier’s endorsement will go a long way towards the winning back three Perth and forming government. 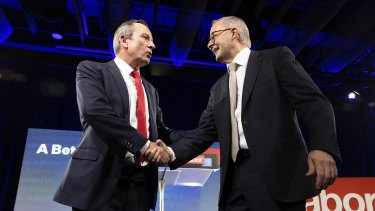 Albanese’s cue to take the stage was GANGgajang’s This is Australia, a 1985 barbeque anthem released when Albanese was making the transition from militant student activist to backroom political.

His entrance was also accompanied by a touch of star power, with Russell Crowe’s unmistakable baritone voice filling the room in a pre-recorded campaign ad.

Having spent the previous week in COVID isolation, Albanese bounced onto the stage like a game show host, keen to show he is fit for the business end. Having previously declared his love for fighting Tories, his sharpest lines were directed at what Labor considers its greatest electoral asset, the current government.

On Scott Morrison: “Whenever Australia needs a solution, he offers only smirk and mirrors.”

On Morrison’s front bench: “Alan Tudge and Peter Dutton; the unspeakable and the unthinkable.”

On the government’s response to the tumult of bushfires, floods and the pandemic: “In the toughest of times people have stepped up but their government has let them down.”

When it came to outlying his vision for how Labor would fix things, Albanese stuck to a more cautious script, one the ALP has prepared to offer people the promise of some change but not so much to fear. One of his core promise’s is simply to turn up; something Labor accuses Morrison of failing to do at critical times.

It is a long way from the electoral chutzpah of Keating and Rudd, the two former Labor prime who listened to Albanese’s speech from the front row.

When Keating took the stage at the Bankstown town in the1993 campaign, he pronounced it the most important election in memory. “Today we stand against radical right-wing proposals which are hostile to fundamental beliefs and Australian institutions,” he said.

When Kevin Rudd launched his 2007 campaign in Brisbane, he produced an audacious reverse ferret: “Today I am saying loud and clear that this sort of reckless spending must stop.”

Standing before a prosaic slogan promising “A Better Future,” Albanese pledged that his government would preserve the big social reforms of previous Labour governments – Medicare, universal superannuation, the NBN and the NDIS – but outlined none of his own.

Speaking after the campaign launch, Rudd said there was a mood for change. “They want to toss this mob out and are looking for a new government.”

As they filed out of Perth’s Optus Stadium into the brilliant sunshine, the true believers were hoping that is enough.