King Charles looked on sparkling form this afternoon as he helped the UK’s Business in the Community initiative mark its 40th birthday – after dodging an earlier egg attack.

The British monarch, 74, warmly greeted a curtseying attendee at the event held at Central Hall Westminster, following a busy morning in Bedfordshire.

Earlier, Charles visited the Luton Dart Parkway Station where he learnt about the new cable-drawn mass passenger transit system, which will connect the rail station to London Luton Airport.

This afternoon had a more celebratory feel, as the King helped cut a cake shared out amongst founders, members, and beneficiaries of the Business in the Community organisation. 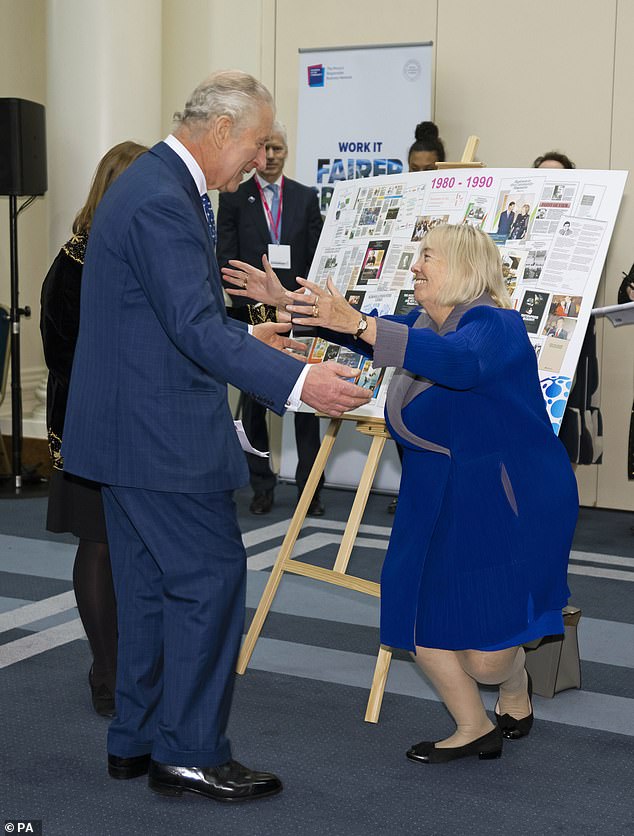 King Charles, 74, rounded off a busy day in Bedfordshire and the capital at an event to mark the 40th anniversary of the Business in the Community (BITC) initiative

Wearing a navy blue suit with smart black brogues, the King looked in jovial mood as he chatted to UK community business owners at the central London event.

Earlier, Charles visited the Luton Dart Parkway Station where he learnt about the new cable-drawn mass passenger transit system, which will connect the rail station to London Luton Airport.

The King looked focused as he was shown the control room before smiles surfaced for the four-minute trip in the Dart.

The monarch was accompanied by staff from the construction and transport system contractors on the short journey.

It came after a series of engagements in Bedfordshire today during which an egg was hurled at the monarch for the second time in a month, with police arresting a man for common assault. 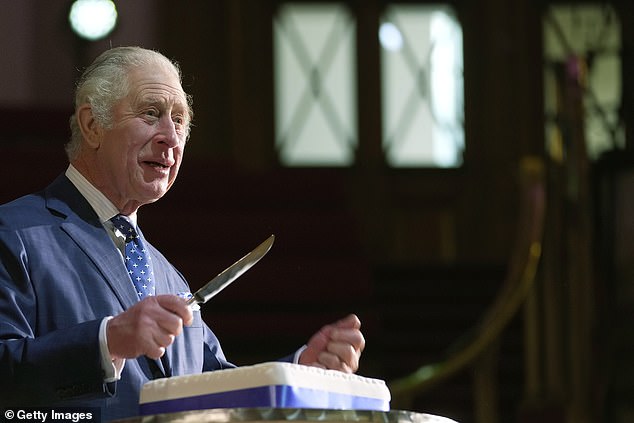 A slice of success: The monarch toasted 40 years of the organisation at the afternoon event 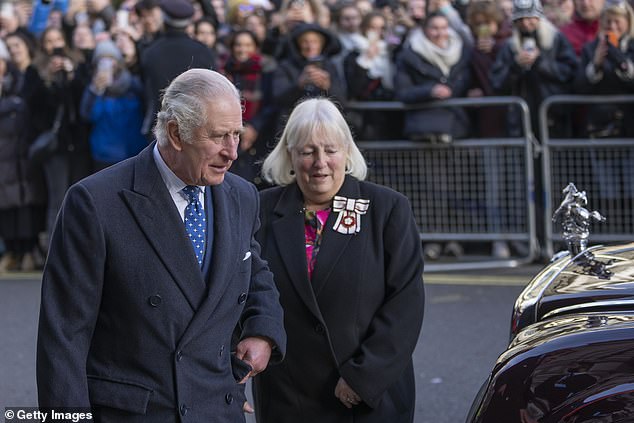 Arriving wearing a wool coat to keep out the chill, the King chatted to business leaders and beneficiaries at the engagement 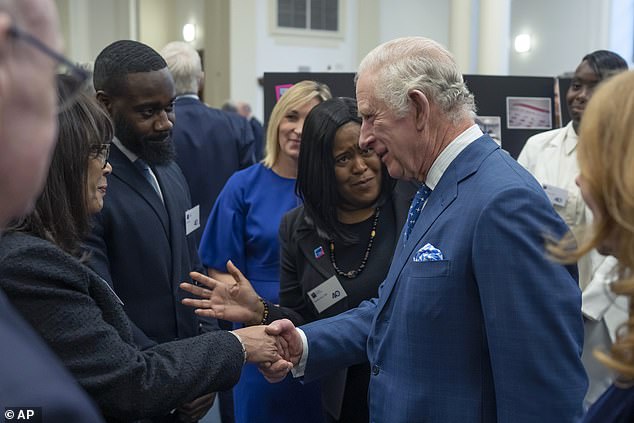 Wearing a navy blue suit with smart black brogues, the King looked in jovial mood as he chatted to UK community business owners at the central London event 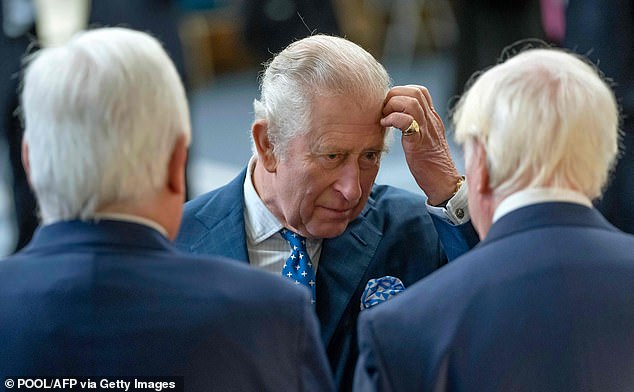 The King attended both engagements today solo, with the Queen Consort not in attendance 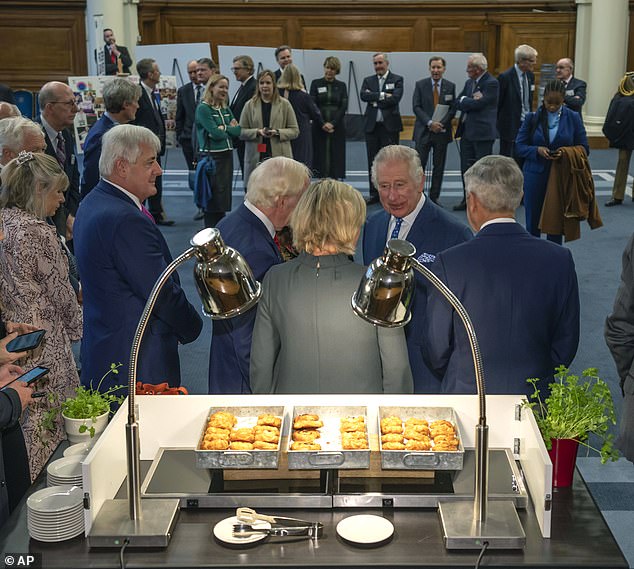 Business leaders past and present joined the monarch at the event 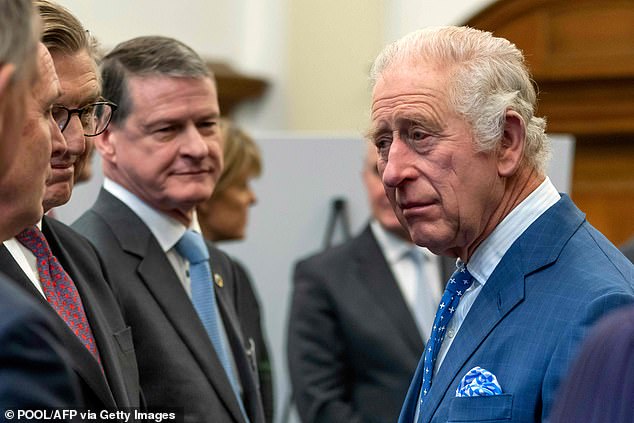 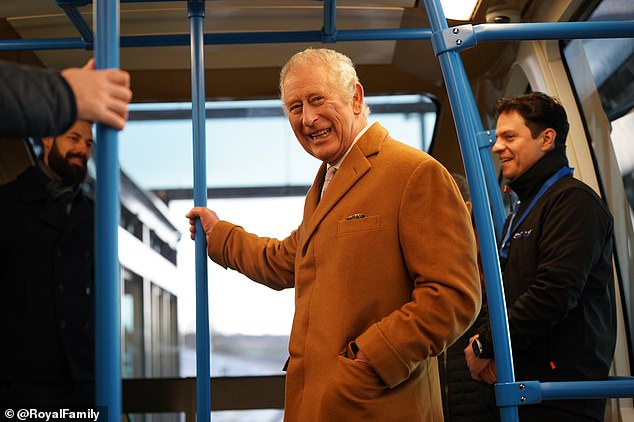 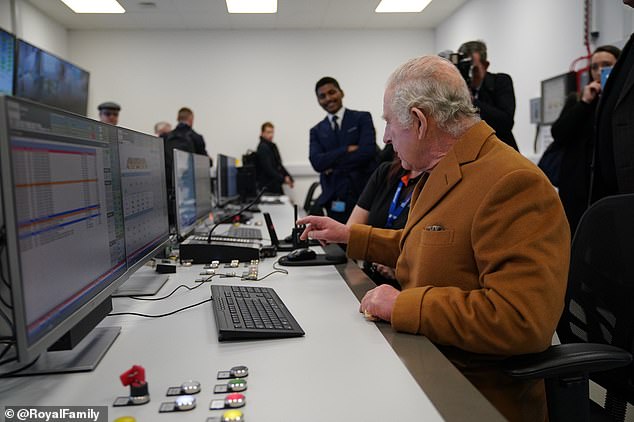 After the visit to the cable car, his representatives shared images and video from the event in a Tweet.

‘The DART is an energy-efficient, electric cable car that will transport train arrivals at Luton Parkway to the airport, reducing carbon emissions by 70 per cent,’  the royal’s representatives said.

‘Earlier, The King met staff and apprentices who work on the DART, before taking the short 4-minute ride to the airport.’

Charles appeared unfazed by the egg-throwing incident earlier today and quickly resumed shaking hands with members of the public after being moved to a different area.

Bodyguards quickly intervened to move the monarch away from the scene of the disturbance on St George’s Square in Luton.

Bedfordshire Police confirmed a suspect had been arrested and was being questioned. 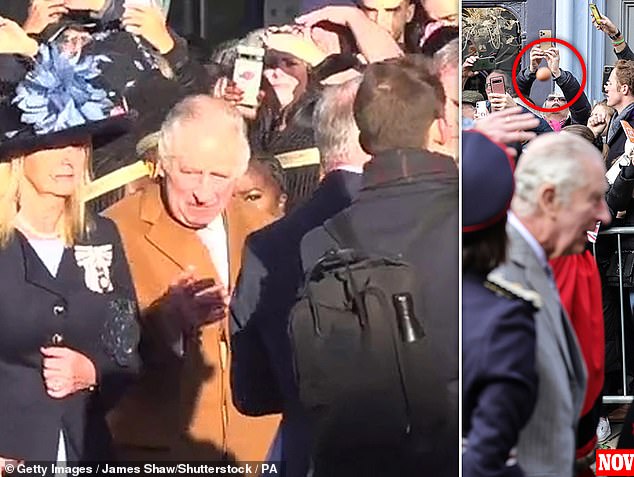 An egg was thrown towards King Charles today during a walkabout in Luton (the monarch is pictured moments after the incident) but appeared to miss. It is the second time the King has been targeted with eggs in a month 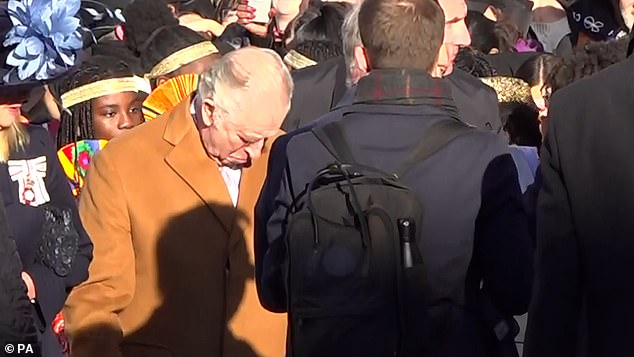 The King looked relaxed as he met members of the public during his visit to Luton, just a day after the Duke of Sussex spoke of a ‘dirty game’ in a trailer for his new Netflix series.

Charles was all smiles in the Bedfordshire sunshine this afternoon, chatting to dozens of people at the Town Hall and the newly built Guru Nanak Gurdwara.

The King, who had a plaster on his left thumb, removed his shoes and put on a Ramaal headscarf in the Sikh temple, where he made a namaste gesture as he greeted people.

He bowed in front of the Sikh holy book, Guru Granth Sahib, and sat cross-legged on the floor, wearing an orange scarf over his suit, before being invited to unveil a plaque to mark the official opening of the Gurdwara. 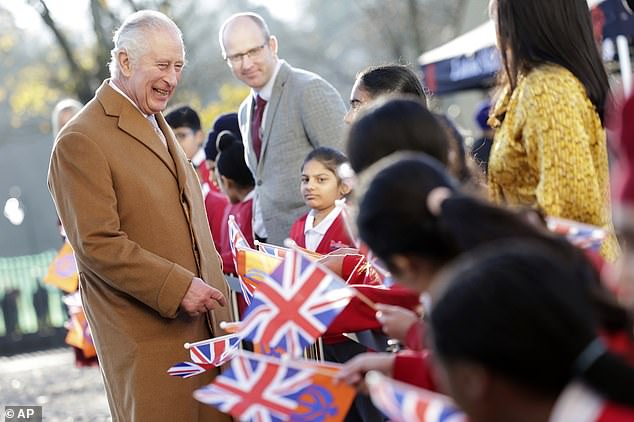 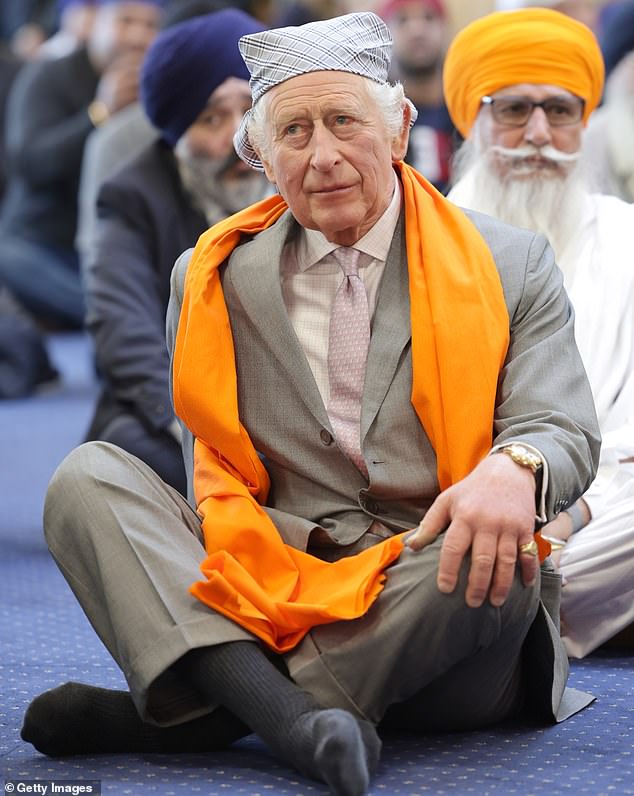 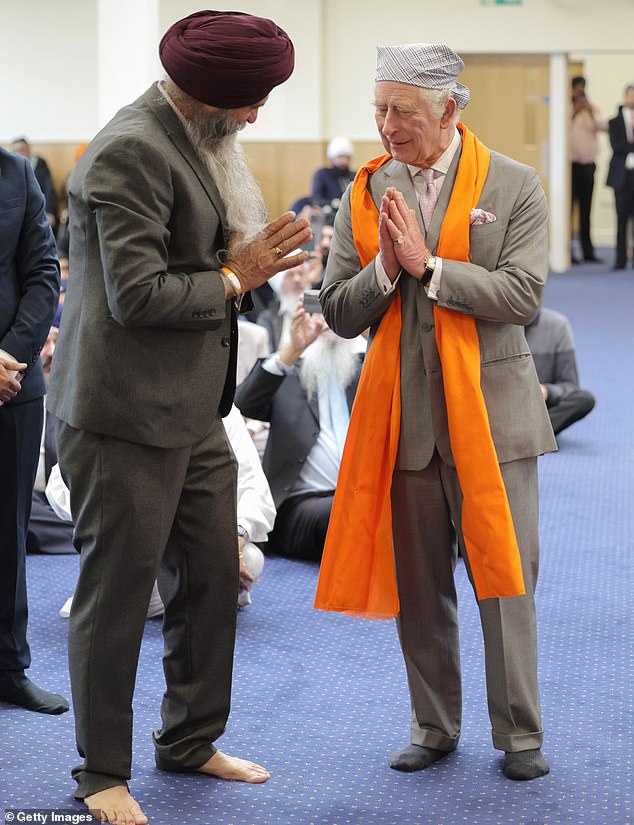 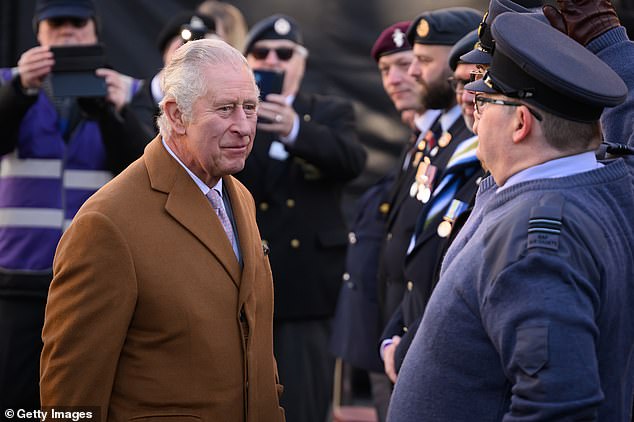 King Charles III speaks with veterans as he visits Luton Town Hall on December 6, 2022 in Luton, England, on his visit

The plaque included today’s date, and Charles joked that it was a good job he ‘turned up on the right day’.

During his visit to the Gurdwara he met women in the kitchen who cook for hundreds of people every day, and marvelled at their work with dough.

‘Isn’t it wonderful how they inflate?’ he said, asking if there is a ‘secret’ to the method.

Earlier, many of those who greeted Charles at the Town Hall wished him a ‘Merry Christmas’ and some had taken presents to give to him.

The King was greeted by Lord Lieutenant of Bedfordshire Susan Lousada and Mayor of Luton Sameera Saleem.

He met representatives from Luton Council as well as guests from a range of community organisations, including Bedfordshire Police and Crime Commissioner Festus Akinbusoye, who was previously supported by the Prince’s Trust.

Charles signed a visitors’ book and unveiled a plaque commemorating his visit in the Town Hall, which was opened by the Duke of Kent in 1936.

He was also give Luton-made honey by council chief executive Robin Porter.

Charles has made several previous visits to the town, including in 1985 when he opened a new terminal at Luton Airport.

Before leaving for his next engagement, he met children from St Matthew’s Primary School.