The Great Royal Bake Off! Prince William and Kate Middleton help to knead dough as they visit Brick lane’s famous Beigel Bake to highlight how communities have coped during Covid-19

Kate Middleton and Prince William helped to knead dough as they visited Brick Lane’s famous Beigel Bake today to highlight how communities have coped during Covid-19.

The Duke and Duchess of Cambridge, both 38, who were living at their Norfolk home of Anmer Hall during the lockdown but are believed to be back at their London base of Kensington Palace, travelled to London Bridge and Whitechapel for several visits throughout the day.

The couple, who have not appeared together in public since July, appeared relaxed during the outing, and were said to be keen to shine a light on individuals and businesses who have gone above and beyond to help others during the pandemic.

Kate rewore a £550 pretty red floral gown by Beulah London for the appearance in the capital, with the dress featuring a bold white collar, and paired the stunning piece with nude heels and her floral mask. 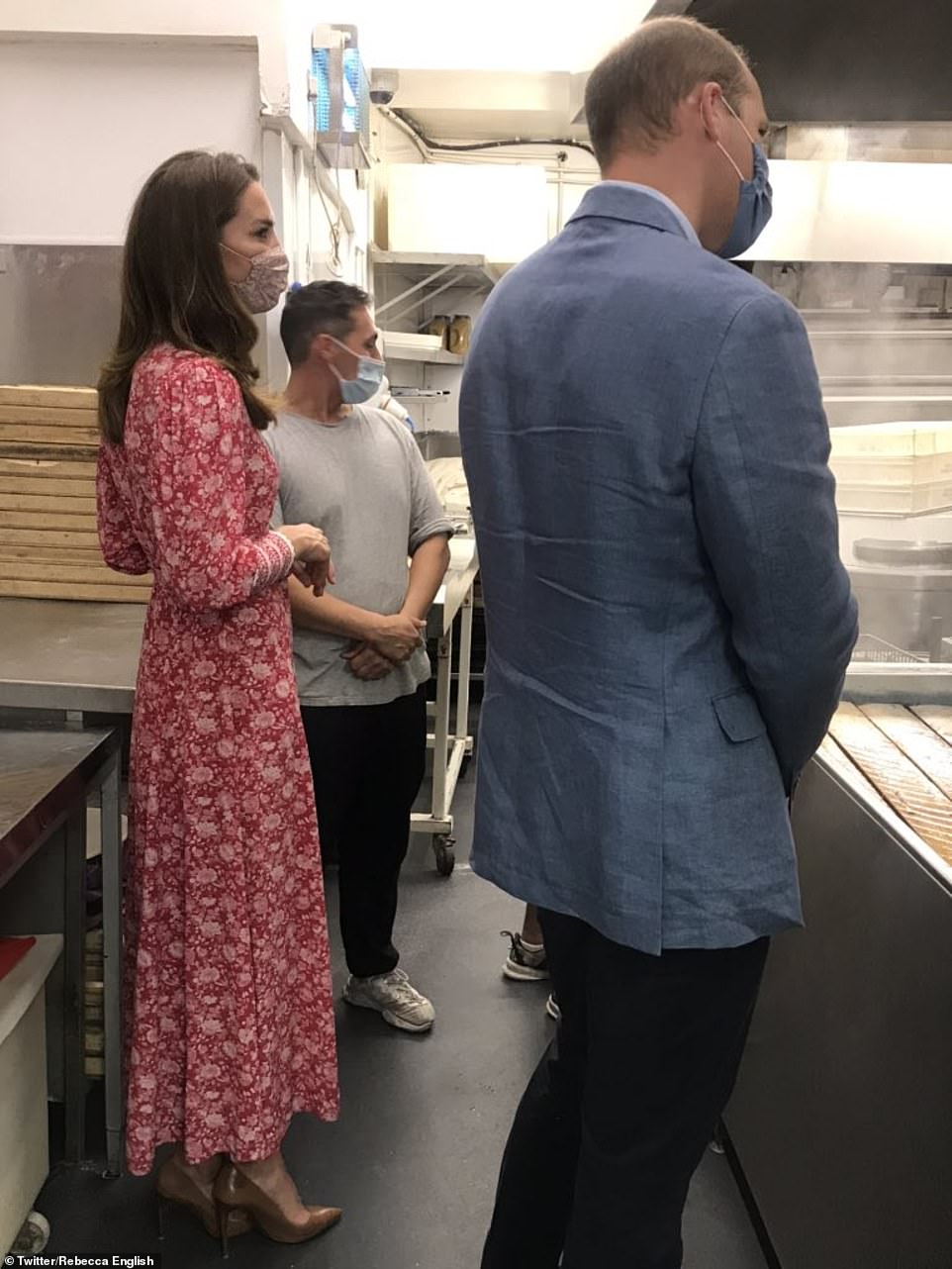 Kate Middleton and Prince William, both 38, helped to knead dough as they visited Brick Lane’s famous Beigel Bake today to highlight how communities have coped during Covid-19

She wore her hair in her signature bouncy blow dry  and kept her makeup neutral for the event.

The Duke and Duchess started their busy day of engagements visiting the London Bridge Jobcentre where they spoke to a group of customers who had been impacted by coronavirus and are now receiving support to move back into work.

Prince William and Kate also spoke to employers about their experiences of trying to help people find jobs during the pandemic.

They went on to visit the East London Mosque and London Muslim Centre in Whitechapel where volunteers have played an important role in supporting members of their community by helping to deliver warm meals, food and hygiene packs and medication to the most vulnerable.

At the Centre, Prince William and Kate met volunteers and beneficiaries of the project who were supported by funds from the National Emergencies Trust, of which The Duke is Patron. 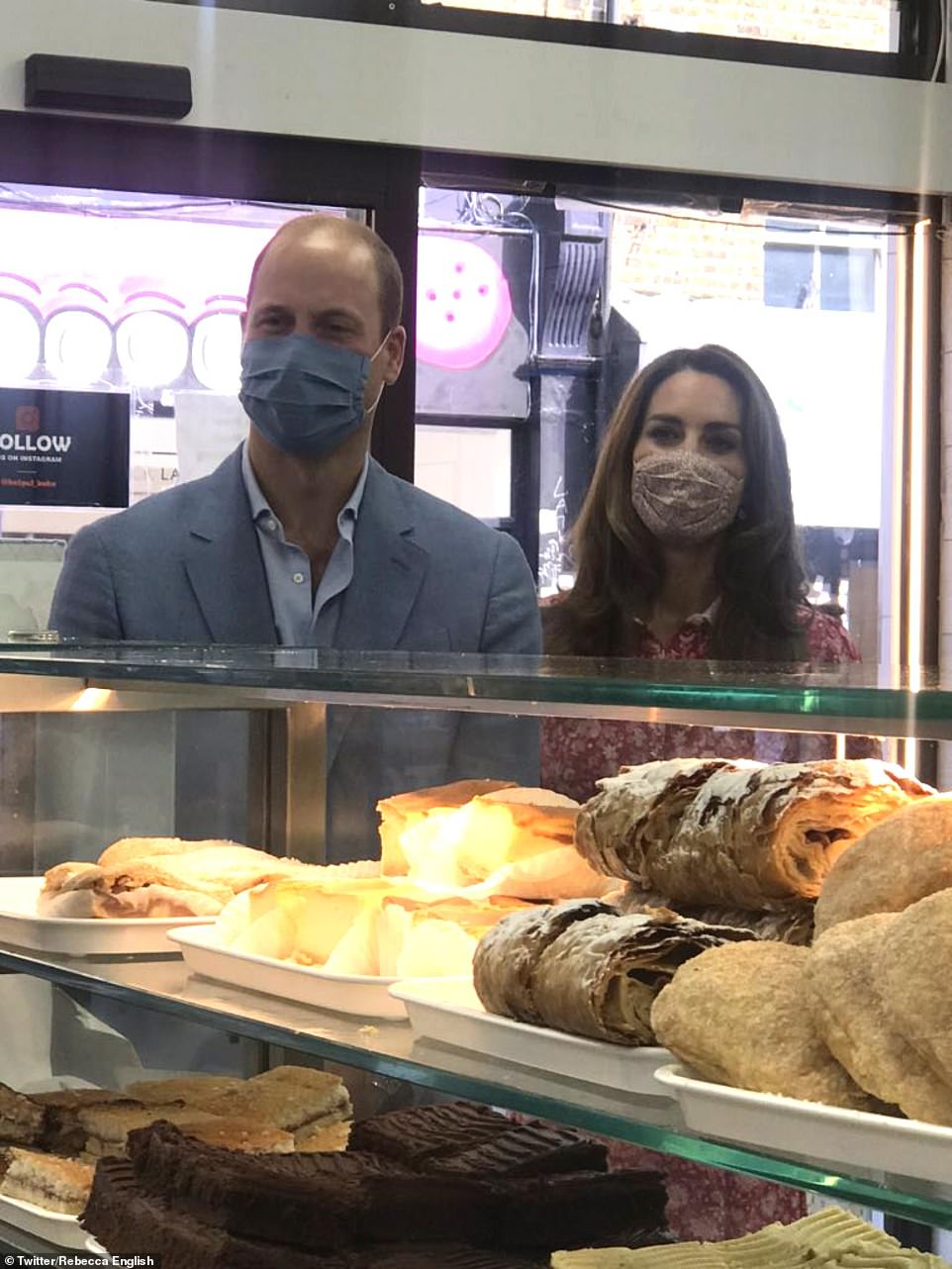 Beyond providing vital supplies, the team have also been providing befriending calls to the isolated, vulnerable and elderly and critical counselling, including supporting women affected by domestic violence.

The 24-hour bakery was forced to reduce their opening hours during the pandemic and The Duke and Duchess heard how this affected employees, as well as the ways in which the shop has helped the local community through food donation and delivery.

The Duke and Duchess appeared enthusiastic as they arrived at the bakery in the capital, waving to staff who told them: ‘We’re so happy to see you.’

Prince William replied: ‘We hear there are very famous bagels in here.’

The couple could be seen getting hands-on during the visit, ducking to the back of the store and donning aprons to join in with baking some bread. 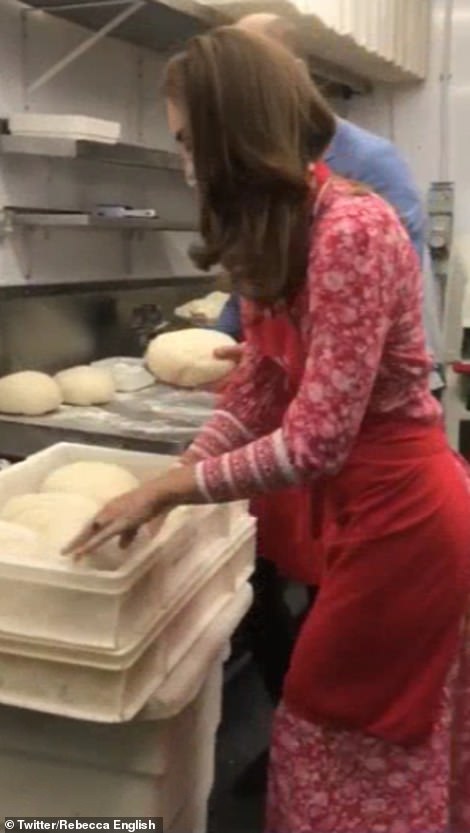 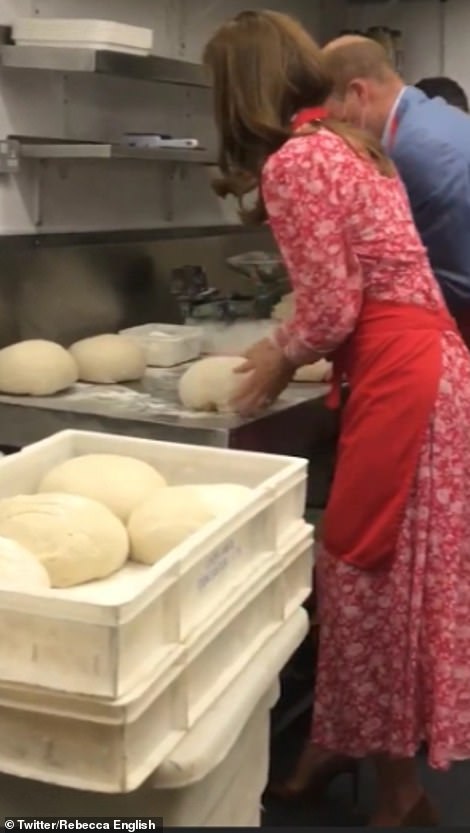 Prince William and Kate’s last public appearance together came at the beginning of July, when they visited the  Queen Elizabeth Hospital in King’s Lynn to mark the 72nd anniversary of the NHS.

The loved-up couple laughed as they spoke to staff and their families at the hospital which has treated 450 patients with Covid-19 during the global pandemic.

The Duke and Duchess are understood to have relished the upsides of lockdown, which they spent at their home of Anmer Hall in Norfolk.

No foreign tours, no away days, no business of state has meant the Cambridges have been able to spend a huge amount of time with their young brood. 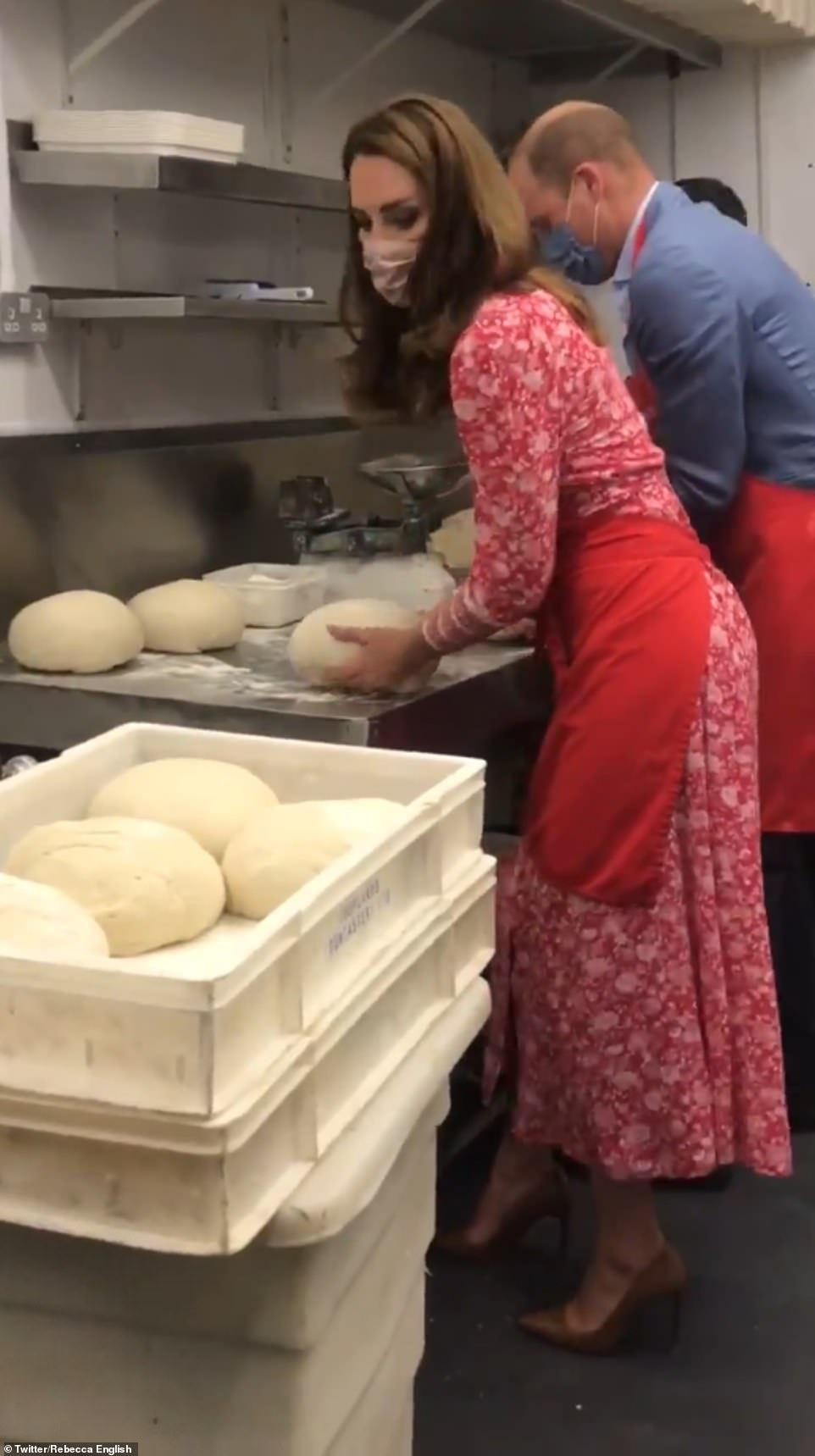 The Duchess rewore her £550 pretty red floral gown by Beulah London for the appearance, with the dress featuring a bold white collar. 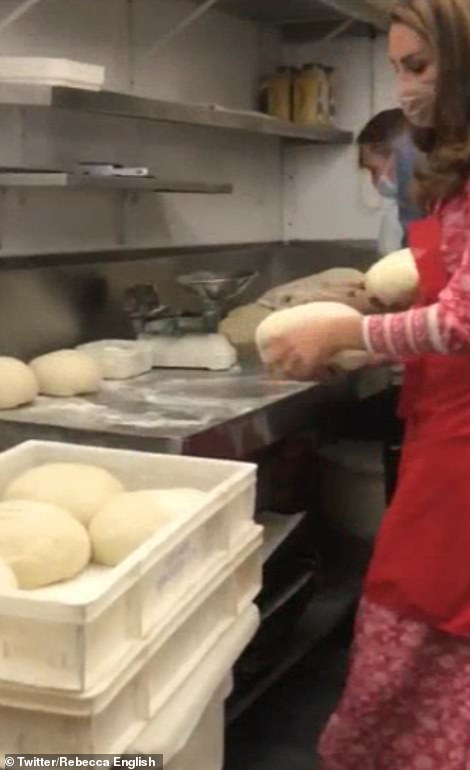 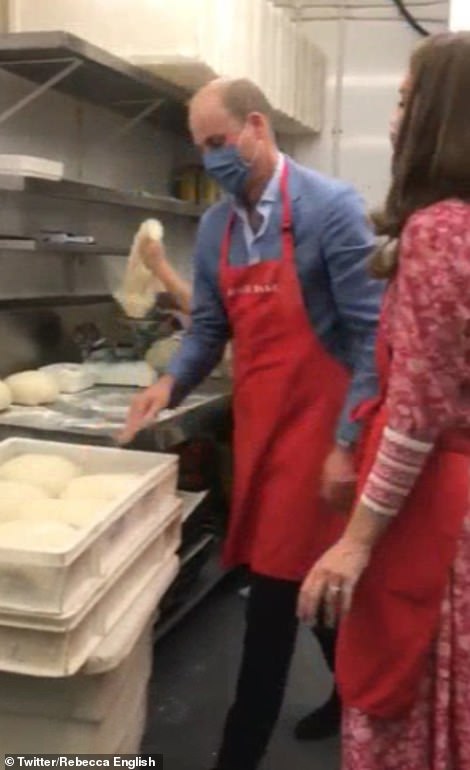 The Duke and Duchess, who spent lockdown at their Norfolk home of Anmer Hall but are believed to be back living at their London base of Kensington Palace, appeared relaxed as they helped out at the bakery

William has managed to keep up his work through numerous Zoom calls to charities, volunteers and carers across the UK, and both husband and wife have jollied the nation’s mood through dark and difficult times.

Once the laptop is closed, William has enjoyed helping George with his homework, painting with Louis and chasing Charlotte round the garden. Pitching tents, camping outside, growing tomatoes and peas from seeds and watching their sunflowers grow has been the order of the day.

Lazy afternoons can be spent at sea – in a small boat in the calm waters off the Norfolk coast, or enjoying the seaside at a beach hut on a local stretch of golden sand where they can run with Lupo the dog.

At other times, the Anmer Hall kitchen has been an ‘explosion of flour and chocolate’ while the family bake cakes and biscuits.

Their visit today comes hours after royal fans were left outraged after the Duchess of Sussex was left out of photos shared on social media to mark Prince Harry’s 36th birthday.

The Duke and Duchess of Cambridge, the Queen and Prince Charles and the Duchess of Cornwall posted a total of four photographs of the Duke of Sussex to mark the occasion but his wife Meghan Markle, 39, did not appear in any. 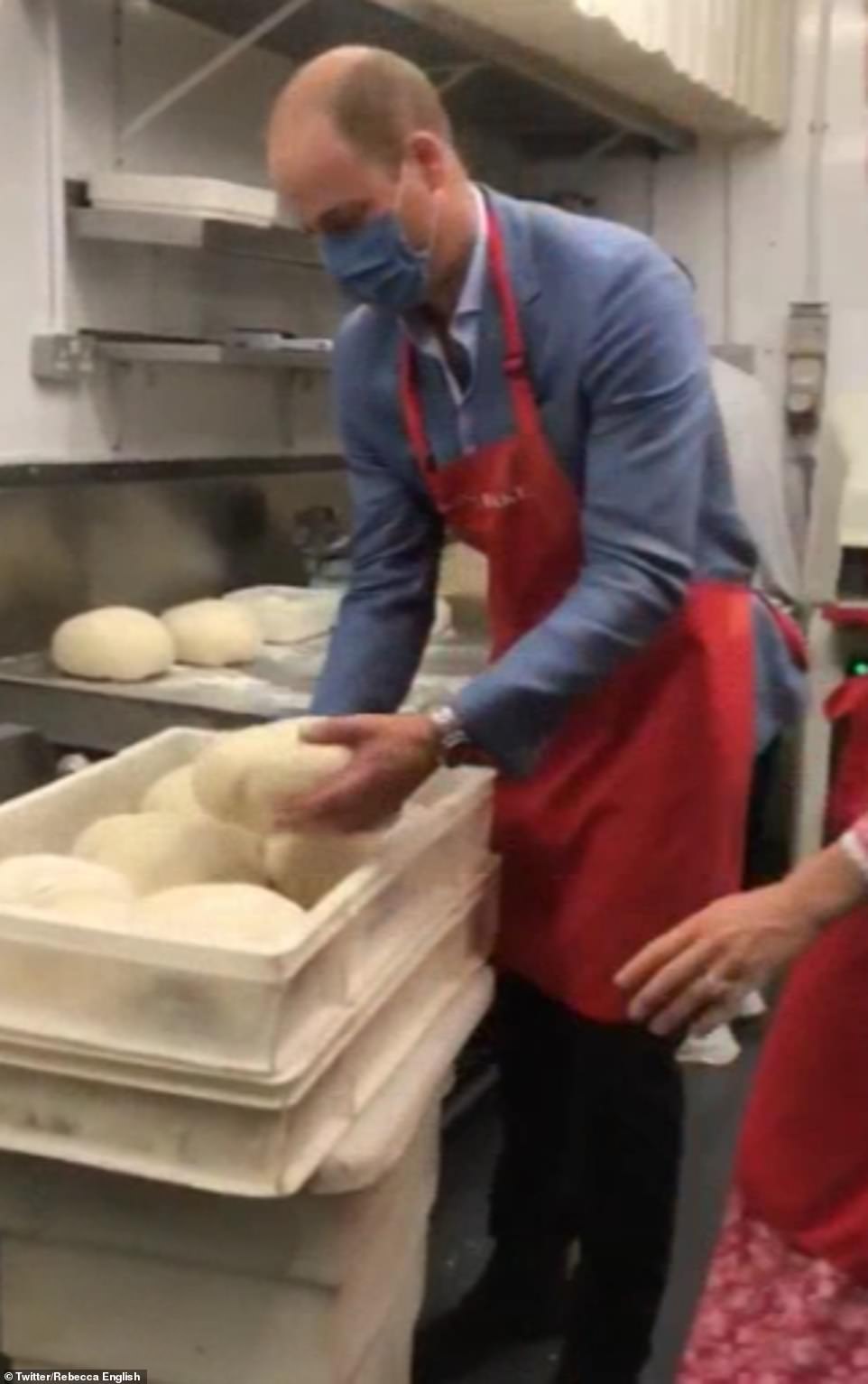 Prince William opted for a cosy blue jumper for the occasion, matching the knit with a smart pale blue shirt and his denim style mask

The omission riled royal fans who took to the comments section to say it was ‘shady’ of family members to ‘literally cut Meghan out of the picture’.

In response to William and Kate’s photo, which shows the Cambridges and Prince Harry in a 2017 running race, one fan noted: ‘There must have been hundreds of photos you could have picked, but you chose to post one of Harry, William and Kate. I’m sure not including Meghan wasn’t unintentional.’

It comes after the strain in relations between Prince William and Harry, who were once inseparable, were laid bare in the Duke and Duchess of Sussexes’ biography Finding Freedom. Co-author Omid Scobie later claimed the brothers went two months without speaking following the Sussexes’ bombshell Megxit announcement.

More recently the Queen was said to have been caught off guard by Prince Harry and Meghan Markle’s $150million deal with US media giant Netflix.

According authors Carolyn Durand and Omid Scobie, the rift between the two brothers began in 2016, when Harry and Meghan first started dating – and was sparked by a conversation during which William urged his younger brother to slow the romance down and to ‘take some more time getting to know Meghan’. 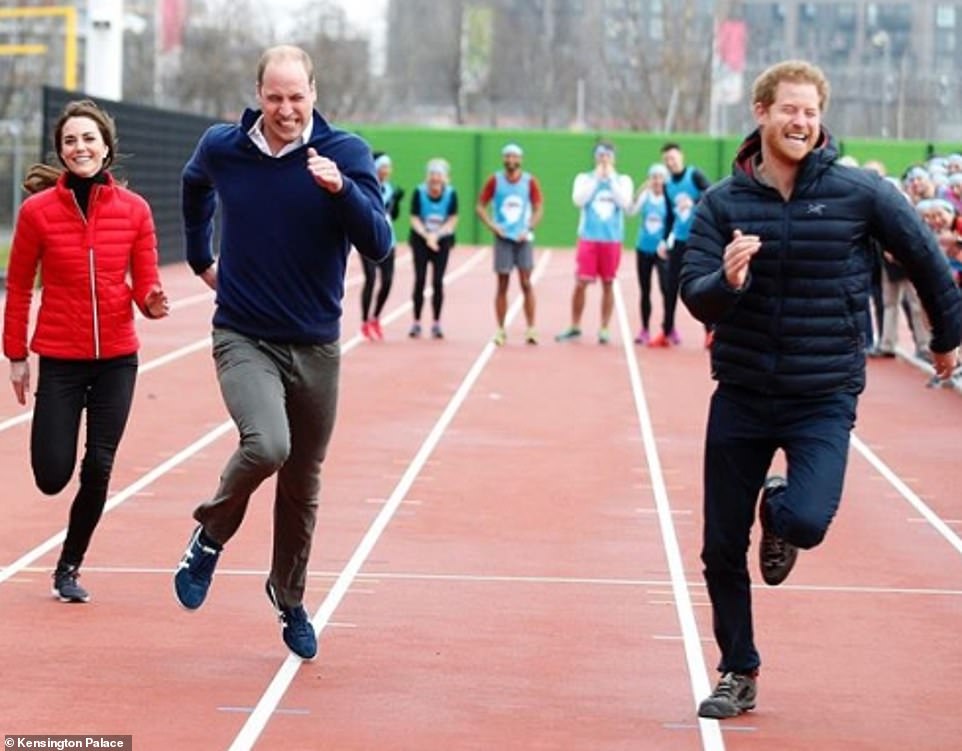 Earlier today, Prince William and Kate Middleton led birthday tributes to Prince Harry, sharing a snap of them as a trio in happier times when they raced each other on a visit to London’s Olympic Park in February 2017

The bombshell biography also reveals that the siblings ‘hardly spoke’ in the months after that tense chat, with sources close to the royals alleging that this bitter rift between the brothers only grew wider after the Duke and Duchess of Sussex tied the knot in 2018.

Their already-fraught relationship then suffered another blow at the start of this year, the book details, when Harry and Meghan announced that they were quitting their roles as senior members of the royal family and would be splitting their time between the US and the UK.

However Prince Harry and Prince William are said to be in the process of repairing the relationship, with the Covid-19 pandemic bringing the brothers closer together.

In a separate interview, Durand said they are slowly ‘making their way back to each other’.

‘Like in any family, there have been some ups and downs, but the brothers are making their way back to each other,’ Durand said. ‘And that will take some time.’