No warring wives here! Footage reveals Kate and Meghan giggling together as they shared a joke at a party for Charles after months of feud rumours

They were pictured together for the first time since Christmas following months of speculation over an alleged rift.

But the Duchesses of Cambridge and Sussex showed no signs of hostility as they shared a joke at a Buckingham Palace party yesterday.

Kate and Meghan, both 37, appeared to laugh off rumours of a feud as the joined the royal family for a reception celebrating the 50th anniversary of Charles’ investiture as the Prince of Wales.

Footage captured at the event, held in the palace’s White Drawing Room, sees the two women laughing as they stand in waiting to greet guests. 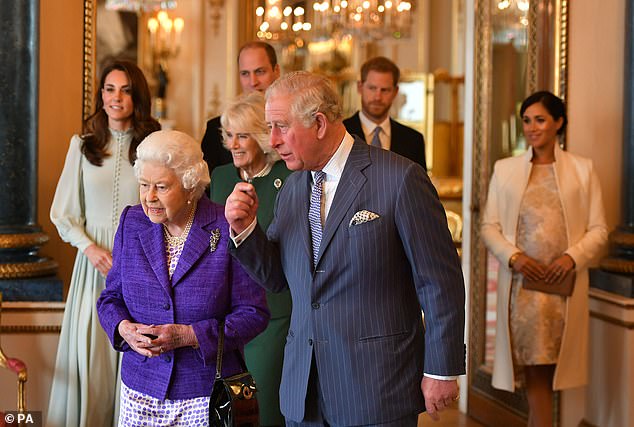 Kate and her sister-in-law, who is thought to be eight months pregnant, were last pictured together attending church at Sandringham on Christmas Day.

Rumours of a royal rift between the pair began swirling after news emerged that Meghan and Harry will move away from Kensington Palace to make their family home 25 miles away in Windsor.

There were claims that Kate broke down in tears following Princess Charlotte’s bridesmaid’s dress fitting ahead of Meghan and Harry’s wedding in May, as well as suggestions the pair had clashed over palace staff.

Then, just weeks later, sources claimed Meghan was ‘fed-up’ of not being able to ‘stand up for herself’ as the demands of royal protocol dictate she keeps a dignified silence amid rumours of tension between the sisters-in-law.

An insider told Us Weekly the pregnant duchess was finding it ‘frustrating and stressful’ having ‘no voice’ – and finds the constraints of royal life ‘debilitating’. 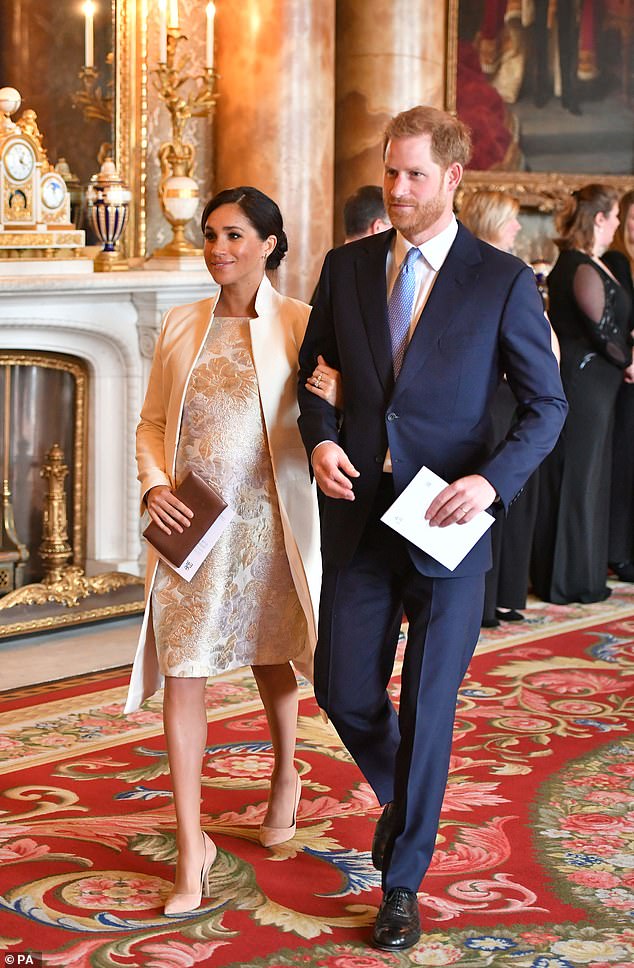 Prince Harry looked smart in a navy suit, injecting a splash of colour with a turquoise tie, as he walked arm-in-arm with his pregnant wife Meghan, who  looked radiant with minimal make-up and understated jewellery 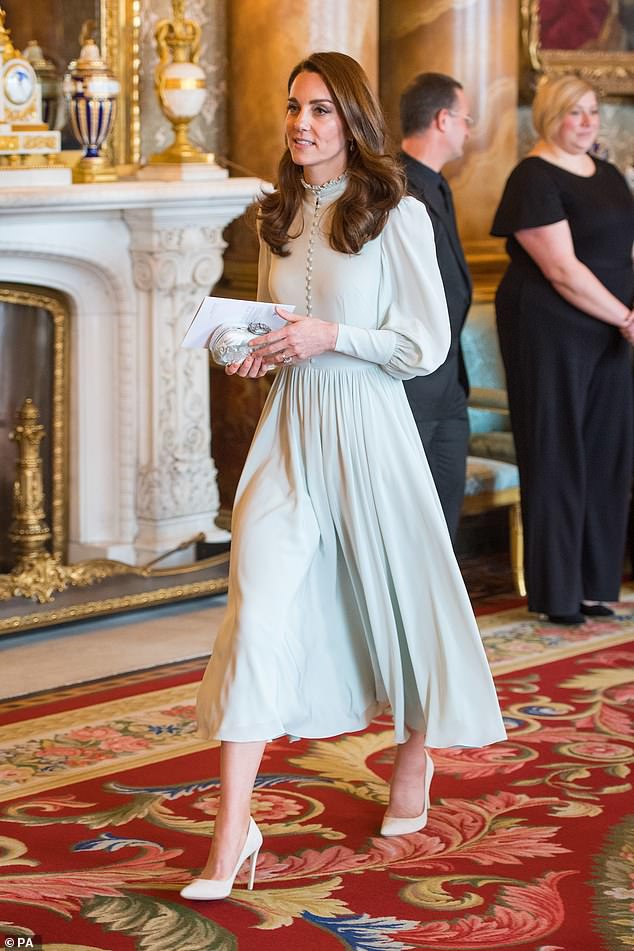 The Duchess of Cambridge opted for a pale blue gown that looked almost identical to a Beulah dress she wore on a visit to Kuala Lumpur in 2012, to mark the fiftieth anniversary of the investiture of the Prince of Wales on Tuesday

However, royal insiders have insisted that there has been no falling out between the Cambridges and the Sussexes, but admitted the pair are ‘very different people’.

On Tuesday the royal family, along with Prime Minister Theresa May,  joined guests at the event honouring Prince Charles’s contribution to the national life of Wales over the past five decades.

Charles was made Prince of Wales at the age of nine, on July 26 1958, and was formally invested with the title at Caernarfon Castle by the Queen on July 1 1969.

The investiture regalia he wore was on display, including the coronet, sword, ring and rod, as well as the Letters Patent for the creation of Charles as Prince of Wales in 1958. 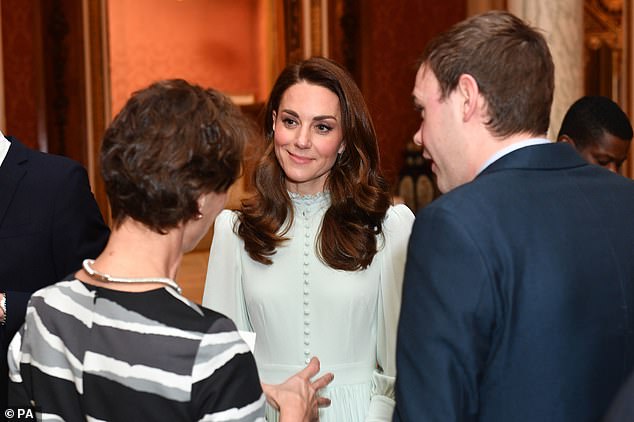 The Duchess of Cambridge opted for a high neck  mint-coloured blouse dress featuring ruffled sleeves and a button-up collar, which she teamed with suede nude heels as she mingled with guests at the star-studded reception on Tuesday 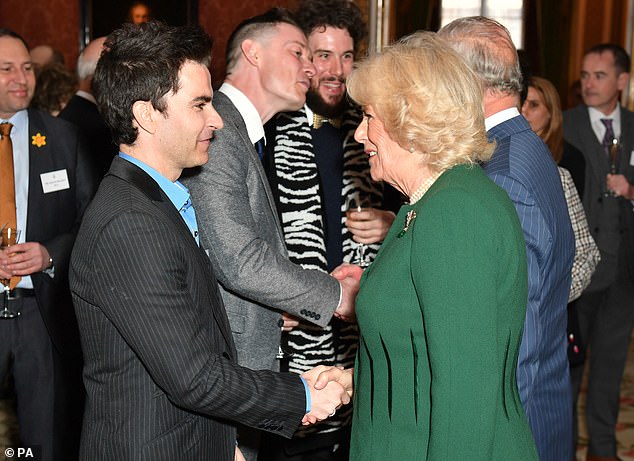 The Duchess of Cornwall was also pictured as she mingled with with Kelly Jones, lead singer of the Stereophonics, at the reception at Buckingham Palace to mark the fiftieth anniversary of the investiture of the Prince of Wales 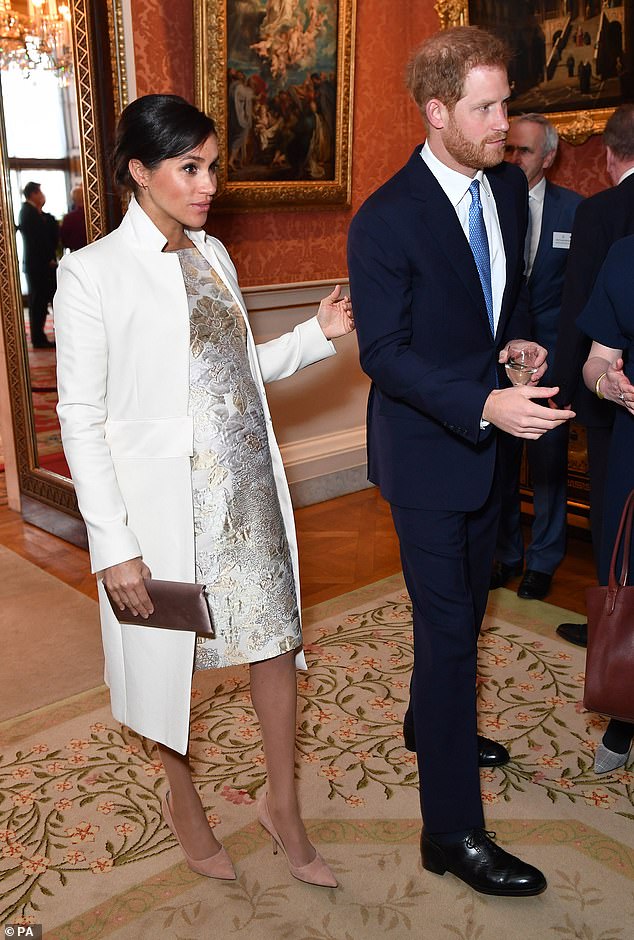 Meghan with Prince Harry at Buckingham Palace today. The Duchess of Sussex, who is between seven and eight months pregnant, dressed her baby bump in a stylish brocade mini

Brushing aside ongoing rumours of a rift, the Duchess of Sussex looked elegant as she joined her husband Harry to honour Charles’ 50 years of service to Wales, the United Kingdom and the Commonwealth.

Meghan cut a graceful figure in a recycled £895 Amanda Wakeley coat teamed with a floral embellished dress as she stood alongside Harry during the celebrations on Tuesday, joined by Kate and Prince William, 36.

Meanwhile the Duchess of Cambridge looked stylish in a mint-coloured blouse dress featuring ruffled sleeves and a button-up collar, which she teamed with suede nude heels.