When Janet Laurence first began some 35 years ago making work highlighting the urgent threats facing our fragile ecosystem, hers was a relatively lonely voice.

There were some who even questioned whether the environment was a fit topic for an artist to explore. 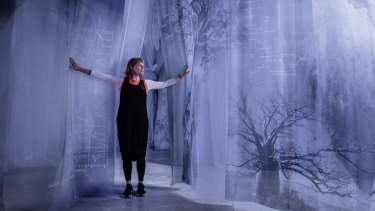 Janet Laurence in part of her new installation, Theatre of Trees.Credit:Louise Kennerley

Fast forward to 2019 and the rest of the world appears to have "caught up" with Laurence, as concerns about climate change and other man-made disasters have become the dominant narrative of our age.

"I feel pleased," says Laurence, 72. "It doesn't feel exactly like a vindication, though."

Now the Sydney artist's work is the subject of a major survey opening today at the Museum of Contemporary Art, curated by Rachel Kent.

Laurence says she is unable to distinguish between her passion for nature and her art.

"I am able to marry the two," she says. "I think I am really fortunate that I can use my art to speak about my passion for the environment.

"I feel a greater imperative than ever to speak. In a way, I am an activist. But the traditional idea of an activist is someone aggressively shouting something. I do the opposite. I try to entice you in to see the details. That's my interest."

Reflecting Laurence's fascination with the healing power of plants, the work includes a herbarium featuring 19th century botanical models and an "elixir lab" where visitors can sample healing plant extracts.

"Trees for me are the great signals of change," Laurence says. "Yet we are still land clearing in a dry country like Australia, despite crippling drought and the knowledge that we should do the opposite: that we need to regenerate this planet."

In another room a massive limb from a tree that died from drought is partially bandaged as if in a vain bid to bring it back to life. Elsewhere, bleached coral creates a beautiful but chilling display.

So after half a lifetime of using her art to ring alarm bells is she hopeful for the future of our planet in this so-called Anthropocene era?

"I think it's really pretty terrible where we are going," she says. "It's going to take a huge shift from the top. I find it incomprehensible why that isn't happening given the strong imperative to do it. But then I also get these huge positive blasts when I see all the good work going on, this groundswell of individuals and groups doing things from the ground up."<!–[if !supportLineBreakNewLine]–>
<!–[endif]–>