It was thirteen years ago but James Keene still feels angry about the day he was forced to miss his daughter's first day at school.

Working at a clinical nutrition company in Sydney's Baulkham Hills, the young father applied to take the morning off three to four weeks in advance. 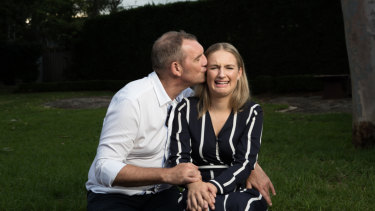 While Emilie isn’t phased, her father still feels upset about the day he missed his daughter’s first day at school. Credit:Janie Barrett

The interim chief executive denied his request, claiming there was "no way" Keene could be absent for any part of the day, as the company's annual conference was scheduled.

"At that time I worked in the marketing area so the first half of the day was just high level people speaking," he says.

He promised to make up lost time and applied to take the day as annual leave, but all his requests were denied.

"It still upsets me to this day," he says.

As back to school ads started saturating the television this summer,  JustMums Recruitment director Rachel Perkins had clients telling her a similar story. She turned to LinkedIn to call out the behaviour.

"A day in business will be forgotten quickly however missing a milestone like this will never be forgotten," the post read.

She was flooded with direct messages, connection requests and emails from new parents sharing their own prickly experiences where workplace culture came up against being a parent.

"One woman told me she had just started a new job and set up her desk with a photo frame of her family, and the boss said it had to be taken away because it was against office culture."

"Other parents have said they had to take a sickie or lie to their boss because they knew they wouldn't be allowed the time off [for special occasions] if they asked."

One woman had just started a new job and set up her desk with a photo of her family. The boss said having it was against office culture.

Angela Knox, Associate Professor of Human Resource Management at the University of Sydney, says "there is still a way to go" when it comes to fostering a mainstream organisational culture that supports new parents.

"Some of the biggest, most profitable businesses are aware of it, but most don't understand just how important it is."

Knox says it is a "two way street" when it comes to providing flexibility to new parents as organisations that go further than "tokenistic" policies create a more efficient and dedicated workforce.

"There are lots of times where managers will ask a parent to go above and beyond."

Flexibility is vital in allowing new parents to keep up with competing work-life demands and that "goodwill" from management can enhance productivity in the longterm.

Knox says this might not be possible for smaller companies, but a supportive culture can be a "strong marketing tool" for businesses.

"When the employee tells their friends and colleagues and wider circle about their experience, it's either going to be a very positive marketing image or a more negative one.

"It's part of the creation of their brand and marketing what they stand for."

Keene had switched jobs before his second daughter went to school and while most of his time at the Baulkham Hills company was positive, that one negative experience is what sticks out.

"I remember there were a number of good things that happened but that moment stands out as a real low point."