J Hus has been honoured at the GRM Daily Rated Awards – winning album of the year.

Aitch and AJ Tracey’s Rain got best video, while JAE5 took home the award for producer of the year.

In his acceptance speech, J Hus paid tribute to fans and everyone that took part in his second album, Big Conspiracy.

“So much effort, hard work, blood, sweat and tears. I love you so much,” he said.

All the nominees in the album, mixtape and video of the year categories were male. 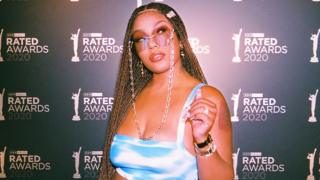 The awards ceremony, which celebrates the UK’s black music genres, took place online due to the coronavirus pandemic.

It featured performances from Kano, Dizzee Rascal, George The Poet and M Huncho.

Comedian Mo Gilligan and presenter Julie Adenuga were hosts for the awards, which returned for first time since Young Spray was stabbed at the 2018 show in London.

In a touching moment, Dutchavelli – Stefflon Don’s brother – dedicated his breakthrough of the year award to former manager Fox, who died earlier this year.

“Grateful for this one, it means a lot.

“Big up to the runners-up, management, family and the mandem. This one’s for Fox,” he said.

Dutchavelli was also honoured for his appearance on Tion Wayne’s I Dunno with Stormzy, which won best track.

Dizzee Rascal was given one of the night’s biggest prizes.

He won the Legacy Award for changing the face of British music, following MC D Double E who won in 2018.

The winners were voted for by GRM Daily readers in an online poll in July and August.

Personality of the Year: Chunkz

Breakthrough of the Year: Dutachavelli

Producer of the Year: JAE5