‘I’m a widow at 42 – I may as well be a fabulous one!’ When her husband Greg died last year, fashion writer STACEY HEALE channelled her grief in the extravagant outfit she wore at his funeral

It’s a bright, crisp morning in November 2021. I’m surrounded by the people I love most, as well as those who have played important roles in my life over the years. My outfit has been meticulously planned down to the last detail. I have multiple Pinterest boards; emails back and forth with stylist friends; and my phone is full of screenshots of different looks. After such detailed planning, I am wearing a floor-length black lace dress with a belted waist and elaborate puffed sleeves. To accessorise, I have delicate black lace gloves and a black net veil that encapsulates my enormous black sunglasses. The outfit is finished with pointed silver boots and a flash of red lip gloss. It is a bold, dramatic look, one suited to a glamorous party or an awards ceremony. Unfortunately, I am going to the funeral of my 44-year-old husband. 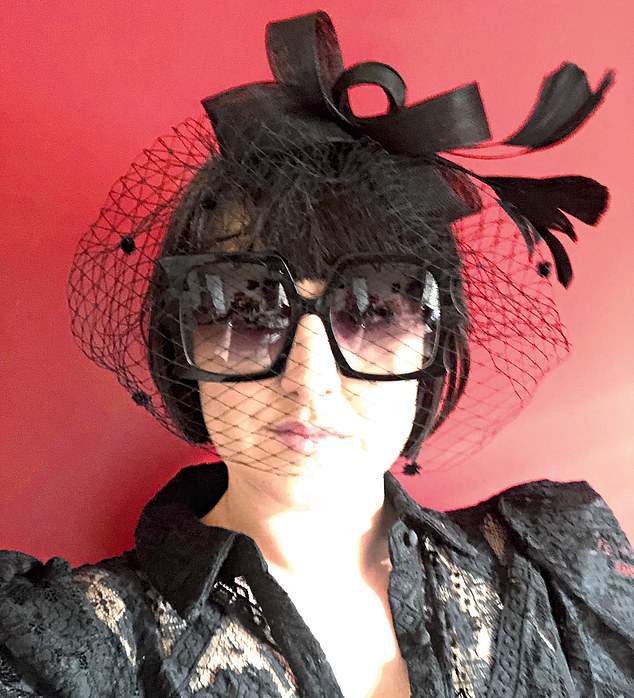 When her husband Greg died last year, fashion writer Stacey Heale (pictured) channelled her grief in the extravagant outfit she wore at his funeral

Greg was diagnosed with terminal bowel cancer in 2016 and died in September 2021, just after our third wedding anniversary. In the aftermath of his death, my family had Covid so I wasn’t able to comb the high street to look for a funeral outfit. From a camp bed in the spare room at my parents’ house, I feverishly ordered dresses online, desperate to find the perfect look that would reflect how I felt. I thought, if I have to be a widow at 41, I may as well be a fabulous one.

I wanted a dress that would suit my mood of deep devastation so I looked to the Italian Mafia widows for inspiration. The frock became the connective tissue between the physical and emotional pain I felt, that I wanted others to witness and understand; a nod to the small flame still burning inside me and to let the other mourners know that I would be OK in the end. My mum questioned my choice, wondering if it would be inappropriate to look so extravagant on such a sombre day. I disagreed. The funeral of your husband is very similar to your wedding – it felt entirely suitable and necessary to express the enormity of the day.

When Greg was told he would die, I left my career as a fashion academic to spend with him whatever time we had left together and become his full-time carer. In my career, I dressed up every day, and expressed myself through clothing ‒ something I adored. When I became a carer, my new uniform was whatever was easy; something comfortable to wear for hours sitting in a hospital, shoes to slip on for a run to the pharmacy ‒ I had no energy to think about what I wore.

This lack of ability to care reminded me of early motherhood. My two daughters with Greg ‒ Dali, eight, and Bay, six ‒ were born only a few years before his terminal diagnosis. Those years, sitting around the house in yoga pants and baggy jumpers stained with baby sick, were so similar to those as a carer. Keeping someone alive, whether a newborn or a dying man, means that your sartorial interests go out the window and you lose sight of who you are. 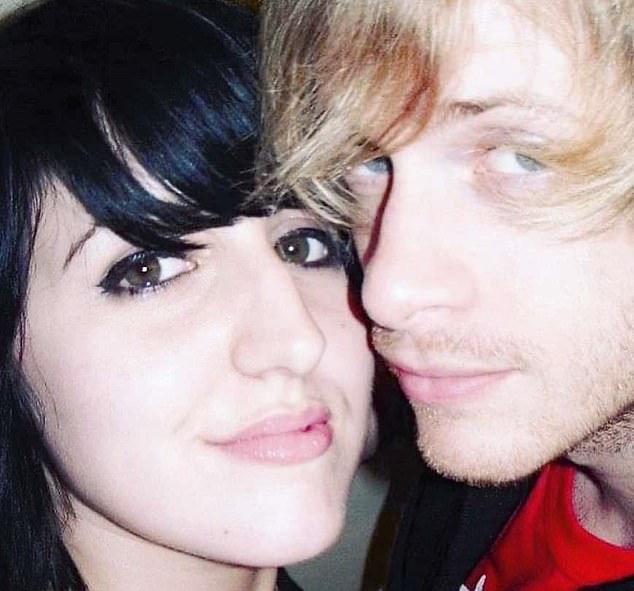 Stacey and Greg are pictured here in 2006. They were together for 15 years. Greg was diagnosed with terminal bowel cancer in 2016

After Greg’s funeral, I sat around for weeks in pyjamas, not wanting to get out of bed. I felt there was nothing left to get dressed for. Pyjamas were the modern version of Victorian mourning dress, a way to tell the world, ‘I am not OK.’ When friends asked me out for dinner, it felt like an enormous task. I thought about not going, using the ‘sad widow’ card that no one could argue with, but I did want to feel part of the real world again.

Washing my hair and taking the time and effort to apply make-up felt like the delicate care that I so greatly needed. I couldn’t let myself die alongside Greg and I had two small girls to guide through grief. I chose something I hadn’t worn before ‒ a short green and pink animal-print dress with puffed sleeves and a high neck, teamed with gold-heeled sandals and pink lip gloss.

Looking at myself in this outfit was a revelation after months of end-of-life care, living at a hospice, not thinking about myself. It felt wonderful to feel fabulous and remember who I am under the years of illness and sadness. However, I worried that, seeing me dressed up, people might interpret it as meaning I had moved on and was now fine ‒ that I didn’t care about Greg any more.

Society has its own ideas about how women should dress in different chapters of their lives: little girls looking ‘cute’; teenagers not showing too much skin; the over 40s not dressing too ‘young’; the divorcée needing to make an effort. But how should a widow dress, especially at the young age of 41? 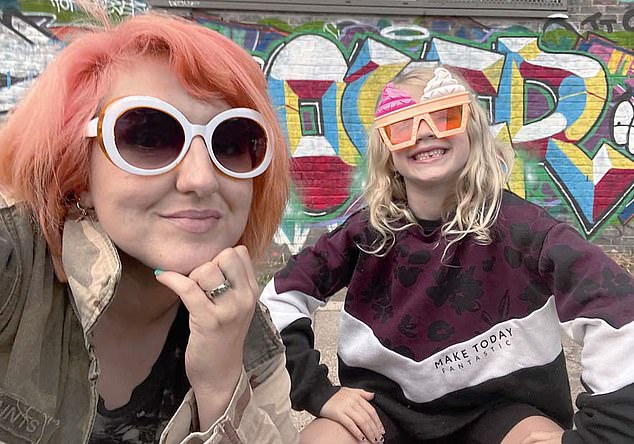 Stacey pictured with her daughter Bay, six, who was born only a couple of years before Greg was diagnosed with cancer

During my first year of mourning, I have moved away from the black clothing of Greg’s funeral and the tired pyjamas of early grief to find a new – and, dare I say it, fun ‒ aesthetic. In my old life, I despised sports and leisurewear; you would never see me in trainers or loose clothes. Now, I have found joy in hunting down limited-edition Nike trainers on Vinted and streetwear by Korean designers. Throughout Greg’s illness, I put away my jewellery, even my wedding and engagement rings, as I found it too restrictive. I couldn’t wear perfume – my favourite scents seemed too heavy or sickly. But over the past year, I’ve delighted in having my ears pierced and rediscovering jewellery I’ve had for years in a cupboard. Now I wear my wedding rings with a bittersweet delight. I can even enjoy perfume again. Choosing accessories reminds me of decorating a Christmas tree ‒ another difficult activity when you have lost someone, but one that can offer such pleasure.

When you lose a spouse, no one tells you that you will also lose your sense of identity and where you fit in to the world. I feel like a teenager again, slowly constructing my identity as I did when I was 13. I have the rebellious abandon of a teenager too; I don’t care what anyone thinks. Witnessing death close up and seeing how fragile life is enhances spontaneity, knowing that time is short so we need to have fun, take chances while we can. This feeling has led me to dye my hair peach, wear acid-green nail varnish, try different styles I felt weren’t for me before.

Fashion is often portrayed as something frivolous but clothing holds an enormous emotional power. It can elevate our moods, help with motivation and improve our posture and body language. A bright-pink lip gloss can act as armour when we are feeling low. A sharp suit can give us confidence when going for a job interview. The Vogue war correspondent Lee Miller reported that during the Second World War women on the continent dressed well as an act of rebellion against the Nazis. When you lose agency over your own life, taking pleasure in fashion is like putting your middle finger up at the universe. I have started to use clothing as a way to channel my grief; choosing brighter colours is a positive distraction from its heavy burden.

If only there was a single outfit that could perfectly convey the difficult and tumultuous year I’ve been through. Instead, I am making up my own, worn with wild and ever-changing hair colours.