I spent £100 on a pet shrink so my cat wouldn’t leave me – And it was worth it, says ESTHER WALKER (even though he’s still two-timing her with the neighbours)

When I brought my cats home for the first time, three years ago, it was a truly happy day. Mo Tenzing and Iris are siblings, and they are both gorgeous and playful.

In particular, the former — named after footballer Mo Salah and mountaineer Tenzing Norgay — has a dazzling, confident charm and his favourite trick is to jump on your shoulders and start purring very loudly.

My children were delighted, as was my husband. We all bonded with both cats straightaway and it really felt like our family was complete.

But very soon, problems started. I always knew I wanted my cats to have free access to the outside and while Iris never goes far and will come back if you call her, even if she is several gardens away, Mo likes to go further. 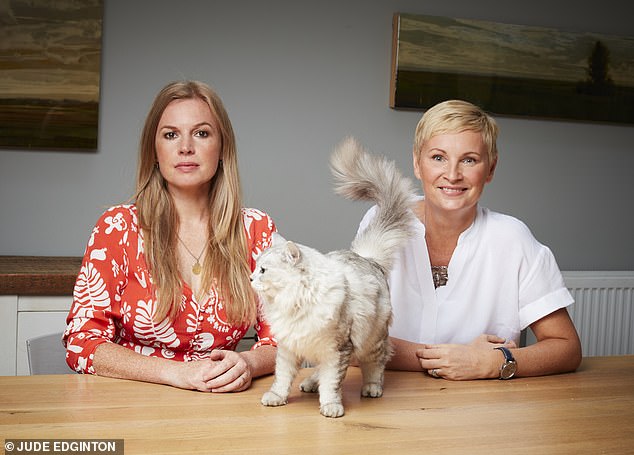 He has returned after days away without his collar on. On one occasion, he came back with a different collar on. Sometimes he doesn’t come back at all.

He once went missing for four months and we only got him back when the woman who had ‘adopted’ him tried to re-register his microchip in her name and we were contacted by the company.

I was furious someone had effectively tried to steal my cat (though she claimed he had no collar on when she found him), but I was so grateful she agreed to give him back that I didn’t say a word.

When I was growing up, we always had cats and I believed myself to be something of an expert. And, indeed, Iris was happy and content. But Mo Tenzing seemed constantly restless.

Worried that one day we would lose him for ever, I realised I needed help.

A neighbour recommended that we contact a feline behaviourist — a cat shrink, in other words — for some explanation and advice. 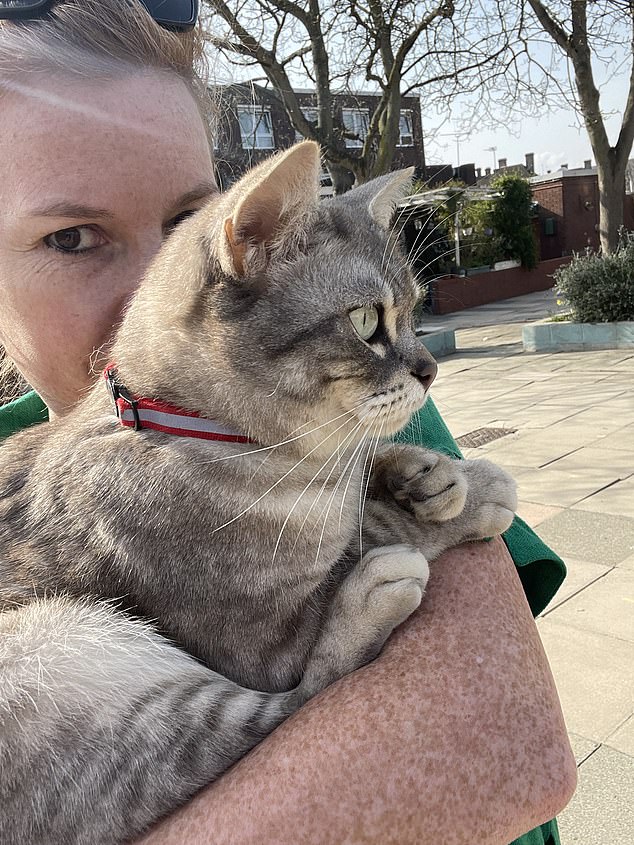 I was sceptical at first. Had I become a crazy cat lady? ­Hiring an expert to psychoanalyse my pets seemed borderline odd.

Certainly when I told my mother, a no-nonsense Welsh farmer’s daughter, that I was going to consult a ‘cat psychiatrist’ about Mo Tenzing’s wandering, she looked at me like I had just landed from outer space.

‘If he is happier living somewhere else,’ she said, ‘why don’t you just let him go?’

It was a good question and I had no other explanation than the fact I love my cat and I don’t want him to live somewhere else. The thought of him cuddling up to someone else at night or snuggling next to them on the sofa is like a knife through my heart.

So I called the cat shrink. Born in Belgium, Marjan Debevere came to London in 1991 to be a model.

‘I adopted two cats from a shelter and then went back to volunteer as a cat socialiser and a photographer,’ she says.

‘The other people who worked at the shelter told me I had a real affinity for cats. I was able to connect with difficult cats that no one else could get through to. It was a real honour to be told that and I decided to pursue it as a career.’ Once she had qualified as a cat behaviourist, Marjan travelled to South Africa to work with bigger cats, and returns every year to the Ashia cheetah conservation centre to work on its rewilding programme.

In London, she troubleshoots a range of feline behaviour problems, such as inappropriate spraying (when cats leave a very unappealing scent all over your house), scratching, wandering, aggression, over-grooming and phobias of objects such as vacuum cleaners.

‘People often get a cat as a pet because they think they are easy,’ says Marjan. ‘Yes, they are independent, but they need the right environment to be happy, just like any animal.’

Marjan’s passion is treating rescue cats — she offers a 20 per cent discount on her treatment fees (which range from £100 to £375 depending on the issue) for any cat from a shelter.

Turns out I’m not the only one willing to fork out for my feline.

Even before the pandemic, when pet ownership went through the roof, our spending on pets had been steadily increasing. In 2020, we shelled out £7.9billion — a 170 per cent increase from 2005. Brits now spend more on their pets than the rest of Europe, and globally are s­econd only to Americans.

Marjan starts with an initial consultation, in which she checks that the cat has been seen recently by a vet to ensure a health issue isn’t the cause of their behaviour. Then she visits the cat in its own environment for about two hours.

After this, she delivers a comprehensive treatment plan to improve or even solve the behaviours.

‘It’s so vital to meet the cat and all the family members, as well as look at the interaction between the cat and their family,’ she says. ‘A recent case I had involved a cat that was peeing and pooing around the house, which is a classic sign of stress. It was obvious the cat was being picked up and handled too much by young children.’

Marjan arrives at our house looking reassuringly non-crazycat-lady in stylish linen with a neat, short haircut. She has a no-nonsense manner and takes a detailed history of Mo Tenzing, observing him with us, with Iris and just hanging out.

The first is that not all cats want to live with each other and female cats are almost always dominant in any group. It’s possible Iris simply doesn’t want Mo Tenzing in the house. Had I unwittingly brought home the feline version of Noel and Liam Gallagher?

The second possible explanation is the presence of a visiting stray male cat.

Some cat flaps work with microchips to make sure that only your pet can access the house. However, we cannot use these because of the awkward position of Mo Tenzing’s microchip (to the side of his shoulder and not at the back of his neck).

Although we’ve done our best to deter the visiting stray cat, he’s persistent and sneaky and occasionally gets into the house. Marjan suggests that, perhaps the combination of Iris’s disapproval and a visiting stray tom makes Mo feel uneasy.

It wouldn’t be the first time housemates have fallen out over boys visiting at strange times of the night.

The third explanation could be that we live in a densely populated part of London with hundreds of neighbours who may feed friendly, charming cats.

If Mo Tenzing felt insecure in our house and could find food and a quiet place to sleep elsewhere, you can’t blame him for taking it. The fourth issue is that he is naturally just a super-sociable cat. Iris likes to socialise with passersby from the safety of our garden wall, but she has never strolled into a stranger’s house, which is something Mo has always done.

As a family we are very present (my husband and I work from home) and interact with the cats a lot. But it’s possible we simply don’t offer enough variation and excitement for a cat like Mo.

‘Some cats are like this,’ says Marjan. ‘They want action and adventure and new things. All cats are different, they have distinct personalities, just as people do. It’s perfectly possible that even if there was no Iris and no stray cat bothering him, Mo would still wander.’

Although this is all a little distressing because there doesn’t seem to be a quick fix to Mo’s disappearing tricks, Marjan is at least able to reassure us that it isn’t our fault.

She offers tips for making Mo feel more welcome when he does deign to drop by.

When he visits for food we are to feed him and Iris separately and to play with him as often as we can. Marjan also recommends not picking him up.

‘Most cats don’t want to be picked up,’ she says. ‘Some will tolerate it, others actively don’t like it. Let him come to you. As far as you can, let him feel in control of his environment.’

This is a particularly hard one for me. When I see Mo Tenzing my first instinct is to dive in for a cuddle. But I am trying to stop, limiting myself to a chaste stroke of the head.

Although Marjan is unable to wave a magic wand and make Mo Tenzing never stray from us again, she does make us understand why he does it and reassures us that, crucially, we are doing all we can.

And this is important. What bothers me much more than not seeing Mo is the thought that somehow his wandering off is my fault. Talking with Marjan, I realise I am applying a lot of human emotion to his behaviour.

I feel betrayed, almost ‘cheated on’ by Mo, even though he’s simply being a cat.

‘Look at Iris,’ says Marjan. ‘Iris is a happy cat. If you weren’t good owners, she wouldn’t be so content.’

Cats do their own thing and their independence is one of the things about them I find so irresistible. They spend time with you out of choice.

Short of locking them up, you can’t control what a cat does any more than you can control the weather. We can change our behaviour, but we can’t change our neighbours and we know there are people in the surrounding streets that still give Mo dinner, even though he wears a collar that says: ‘Please don’t feed me.’

There’s not much I can do about this. I’ve tried restricting him to the house but he was so unhappy, I swore never to do it again.

I have had to learn to be happy with seeing him twice a day, knowing I must share him with an adoring public.

Had I not consulted Marjan, I would still be stuck in a rut of selfloathing, feeling like a bad person for not being able to make my cat happy enough to stick around.

So while some people might think spending £100 on a cat shrink is madness, I say she is worth every penny.