Bruna Papandrea has attended many a wellness retreat, with mixed results.

First there was the Golden Door retreat in the Hunter Valley.

“I like, ran,” the powerhouse film and television producer confesses. “I literally escaped after 36 hours.”

There was the spa in California where you “just basically drink tea and take vitamins”. 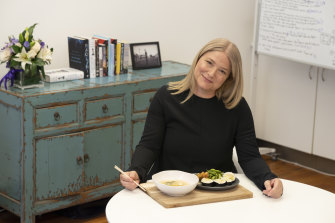 Then there was the hiking and yoga escape in Italy. “It sounds great, except you’re in the most beautiful place on earth, but you’re not eating pasta and drinking wine, so that actually discounted what you want to be doing in Italy,” she recounts. “But the hardest thing for me, for anyone who knows me, is that you weren’t allowed to speak until noon.

“So you had to get a silent breakfast, do silent yoga and then silent hiking, and then you could speak in the afternoon.”

No such stillness pervades the atmosphere of Papandrea’s newest production, co-produced by her company Made Up Stories and Nicole Kidman’s Blossom Films.

It is a television adaptation of Nine Perfect Strangers, the 2018 Liane Moriarty novel in which nine “broken” people gather at the exclusive Tranquillum retreat.

They come to be healed by the mysterious and possibly dangerous Masha, the Russian-born retreat leader/guru played by a chilling-yet-charming Kidman.

The series is the second Moriarty book Papandrea has adapted – the first, Big Little Lies, she produced with her former business partner, the actress/producer Reese Witherspoon.

Big Little Lies had an all-star cast led by Witherspoon and Nicole Kidman. It was a global hit and heralded the mega-success of high-quality, big-budget, female-led TV drama, particularly on television streaming services.

Then in 2016 Papandrea, who was raised with her three siblings by a single mum in the socio-economically depressed Snowtown, South Australia, parted ways from Witherspoon.

She formed her own company, Made Up Stories. Its hits so far include the thriller The Undoing, starring Hugh Grant and Kidman, the movie The Dry, based on the bestseller by Jane Harper and starring Eric Bana, and the movie Penguin Bloom starring Naomi Watts.

A forthcoming project is a film version of The Lost Flowers of Alice Hart, the acclaimed novel by Australian author Holly Ringland.

Papandrea and her business partners are voracious readers of manuscripts, often optioning books before they are even published.

‘All is not as it seems on the surface, and that’s the subject I’m deeply interested in because I think it makes for great drama.’

What drew Papandrea to this second Moriarty adaptation?

“Well obviously the thing that first drew me was Liane because we had so much success with Big Little Lies,” she says.

“We bought the book after just hearing a log line, about nine strangers who are all looking for answers to different issues, and who descend on a wellness retreat run by this woman.

“That’s all we knew when we were like, ‘We want to do it’ … Like Big Little Lies, this book does that same thing where all is not as it seems on the surface, and that’s the subject I’m deeply interested in because I think it makes for great drama.

“I’m also fascinated by people’s obsession with wellness culture, so it felt very relevant, you know, more relevant now than ever because we’ve all been trapped, just by the world changing.” 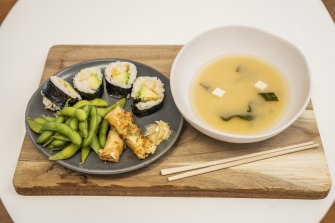 Bruna Papandrea’s lunch from Sushi on Stanley in Darlinghurst.Credit:Mark Rogers

I am not sure what I was looking for when I ordered a quinoa sashimi salad on UberEats, but I suspect I was subconsciously playing along with the wellness theme.

The salad is very much what they call “clean food”, and delicious, but it feels odd to be eating on Zoom, as though I’m breaching some unwritten pandemic protocol.

No one should be able to see themselves chew in real time.

Papandrea also ordered Japanese, but as it turns out, on a different day, the day when the photographer was coming, not the day when we were scheduled to meet.

So she talks while I eat, before I give up eating because I feel too self-conscious.

It’s just another gift from the pandemic: the ruination of lunch dates. 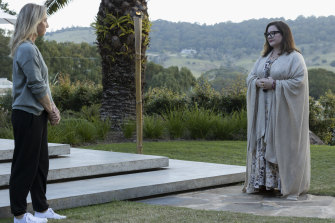 Strangers in paradise: Melissa McCarthy (right) plays a novelist scarred by a recent scandal; Asher Keddie (left) is grieving the death of a child, which has created a chasm in her marriage.Credit:Amazon

“I did love that there was a genre component to it, that there was a lot of suspense built into it. And I am fascinated by the idea of who is this woman, who is Masha? In some ways, that’s the big question the show asks.”

When assessing material, Papandrea says she looks for strong stories driven by character, regardless of the genre.

“That’s why TV is so amazing for us, that opportunity to explore that complexity over time.”

The show was originally supposed to be filmed in California, home to wellness culture and all things woo-woo, but the pandemic hit just as filming was due to commence.

“At that point when we all went to our homes, in that very first lockdown, we started talking to Nicole … because obviously Nicole’s Australian, I’m Australian, we were like, ‘We wonder if it would be possible to move it?’” 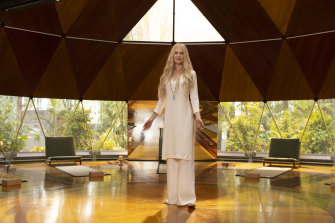 Nicole Kidman plays the enigmatic owner of a wellness retreat, where a group of troubled individuals gather, in <i>Nine Perfect Strangers</i>.Credit:Amazon Prime

They started scouting possible locations and narrowed in on Soma, a high-end rainforest retreat in the Byron Bay hinterland that was due to open.

Soma ended up becoming Tranquillum, spliced together with some scenes filmed at a nearby private property that is “architecturally stunning”.

The production is visually lush, with beautiful interiors, luxurious pools, hot springs and waterfall-bathing giving an escapist glimpse of life outside the pandemic.

Moving the set to Byron was “not a hard sell” even for the big US-based stars such as Melissa McCarthy and Bobby Cannavale. 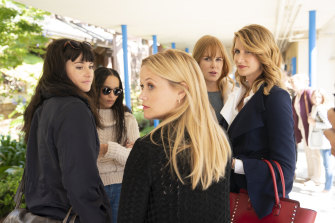 The production team was able to keep the actors and crew in a safe COVID bubble on set, complemented by a strict testing regime for the 98-day shoot.

“It ended up being an amazing experience,” Papandrea says. “We were all very grateful. Most of the world wasn’t working, and we were able to.”

Much of the show’s drama derives from the group dynamic, and so many of the scenes involve the whole cast, which is quite unusual. The cast became close-knit.

This inclusivity mission extends to the behind-the-scenes hiring in all production and support roles.

Why does Papandrea think Hollywood money-men have only recently cottoned on to the huge demand for female-led stories?

Papandrea says that when she and Witherspoon made their first two big box office-successful female-led films, Wild and Gone Girl, the “wind was on our backs”. 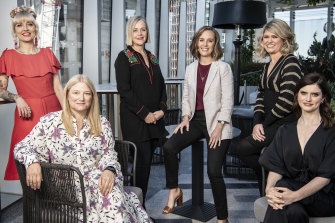 “The problem with our business is that when a female thing is successful people still consider it an anomaly. It’s not like it’s all solved. You still have to sell, and I do think that’s harder for female-fronted stuff than male stuff.

“I still think that’s a massive double standard – even though females are the big drivers, they are the main consumers.”

‘It’s not like it’s all solved. You still have to sell, and I do think that’s harder for female-fronted stuff … a massive double standard.’

Hollywood is also experiencing something of a revolution in terms of diversity on screen and behind it. Papandrea says her companies have integrated those values “for a long time”. They don’t talk about “diversity”, preferring to use the word “reflective”.

“We are optioning a lot of material and trying to put shows together that are much more reflective of the world we live in,” she says.

“We are very much interested in gravitating to those forces. We stay as open as possible and look for every opportunity.”

Papandrea is now based in Sydney for the foreseeable future, locked down with her husband Steve Hutensky, who is a producer and chief operating officer at Made Up Stories, and their eight-year-old twins (a boy and a girl).

The couple decided to base themselves in Australia for work and lifestyle reasons, particularly as Papandrea has the auto-immune disease lupus.

“He is American. He loves Australia as much as I do,” Papandrea says of her husband.

“It’s been great being in Australia together for such a long time because we’re often both of us on the road, so you know, if there are positives from COVID, that’s a good one.”

Papandrea seems reasonably upbeat about the lockdown, and says “you got to try to stay up for [the kids], you got to just keep it fun and light. We don’t have the news on at home.”

She reels off Ted Lasso, Broadchurch, Norwegian political thriller Occupied, a Swedish family saga called The Restaurant, and “everything on Netflix”. 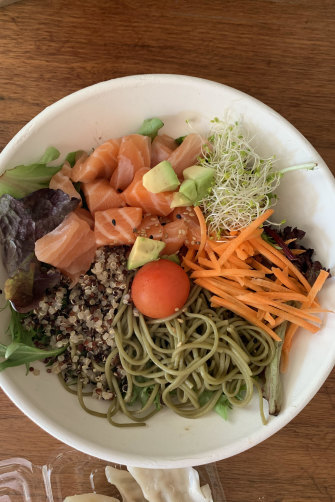 She says she gets crushes on writers more than actors, with the exception of Meryl Streep, who had a starring role in the second series of Big Little Lies. I ask what it was like to work with the high priestess of acting – did the set fall into silence when she walked on?

“She is so focused on the work, it’s not like you’re sitting there chatting to Meryl,” Papandrea says.

She would love to work with Phoebe Waller-Bridge (creator of Fleabag), Shonda Rhimes – “I think she’s kind of phenomenal” – and Jane Campion, whose work was a big influence on Papandrea in her early career.

We have reached the end of our allotted Zoom hour and Papandrea notes I have barely touched my salad. It’s fine, I say, I can finish it later. These days, we have nothing but time. We need good television to fill it.