Welcome to The State of R&B, ESSENCE’s look at the past, present and future of rhythm and blues. In this piece, ESSENCE editors Jasmine Browley and Brooklyn White investigate the R&B bags secured—and lost.

In 1997, Kelly Price sang “the mo’ money we come across, mo’ problems we see.” But what happens when there are rumors of no money?

You address them, head on.

“R&B has never not been lucrative because R&B can be performed around the world,” J. Valentine, a singer and songwriter with N’SYNC, Omarion and Mario songs to his credit, says to ESSENCE. “You don’t need as much insurance to protect the venues,” he says, hinting at hip-hop’s more rowdy shows. “So, the truth of the matter is, there’s always been money in R&B. It’s where you go to find it.” The problem isn’t always making the money though. Sometimes, it’s a matter of not getting the slice you deserve.

In 1991, R&B girl group TLC signed a famous recording contract. The deal was the grounds of a dispute that led the singers to file for Chapter 11 bankruptcy in 1995, citing debts of $3.5 million. In late 1996, the group settled for an estimated $10M, effectively severing ties with their management and inking a direct deal with their label.

Earlier that year, Tionne “T-Boz” Watkins and her TLC bandmates, Rozonda “Chili” Thomas and Lisa “Left Eye” Lopes, shocked the world when they revealed they were “broke as broke can be.” They broke the news while holding two freshly-won Grammys a piece, in front of a slew of journalists. At that time, the group had sold more than 10 million albums and completed a successful tour.

“We just knew we were open, and we’ve never been hush mouth about nothing,” Watkins tells ESSENCE. The group’s honesty seemingly broke the unspoken code of silence among artists who felt they weren’t being treated fairly. The silence further perpetuated the cycle of unbalanced record label contracts.

“It was unheard of for artists, especially women, to speak up. So if we had to be the first to do it, so be it,” Watkins adds. 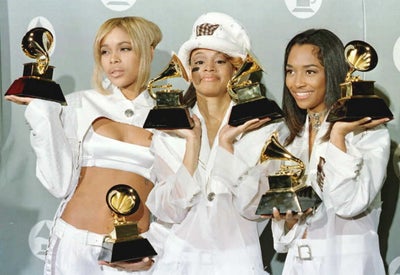 Entertainment lawyer Aurielle Brooks was not involved with the suit, but shed some retrospective light onto the case. She shows how TLC’s filing was an upward move that allowed past labels’ debts to be alleviated.

“One thing that may be missed is that upon filing for bankruptcy, the expectation of recoupment or a label making the money back that they’ve invested now becomes a thing of the past,” Brooks says. “The main angle here is in the event an artist becomes a superstar but their label is refusing to renegotiate their antiquated deal, this is an option they chose to force them to the table and relinquish some of the extensive debt they owed to every hand in their pots.”

When the group filed for bankruptcy, they were unable to afford it. They borrowed the cash from Lopes’ on-and-off again boyfriend, Andre Rison.

Devo Harris, a former songwriter who worked with Aretha Franklin and launched the career of John Legend, has thoughts that counter the belief that R&B is indeed a money maker. Race, of course, plays a factor.

Harris mentions working as Legend’s deejay in the early 2000s. Some nights he would watch the singer bring thousands of audience members to a venue, only to have much less popular rock acts perform the nights before and after Legend. Since the singer’s fans were majority Black, he wasn’t always able to land the venues he deserved as a multi-platinum selling artist. The size of a performance space directly impacts turnout, which in turn affects the cash flow.

“So, as a Black artist and as a typically Black genre, it is harder to get butts in seats,” Harris says.

The streaming era has only made it harder on artists.

“Streaming has completely changed the industry for the worse, at least where artists are concerned.” Shari “Truth Hurts” Watson says. “We don’t make any money from it and the streaming structure also politicizes the industry in a way that makes it hard for artists to focus on the art.”

If you’ve noticed that song lengths have gotten shorter and shorter over the years, this is why. Most popular streaming platforms operate on a pay per play basis, in which low streaming music layouts have caused song length to shorten so listeners are encouraged to replay the song more often, thus bumping up the amount artists earn.

Since a platform like Spotify pays major artists between $0.004 and $0.008 per stream, this incentivizes artists to create shorter tracks. It doesn’t hurt that short song clips have the potential to go viral on platforms like TikTok.

Watkins suggests today’s new artists take the independent route to help maintain control of their finances and how their songs are used. She revealed she’s re-recorded all of her vocals on TLC’s albums.

“I re-recorded my [vocals] on Crazy, Sexy, Cool; Oooooooh, on the TLC Tip—everything I’ve ever sang. And I own the masters of all of my publishing that I have ever written. Period. I own everything.” She starts rapping the hook of GloRilla’s “F.N.F. (Let’s Go), before saying, “I belong to no label, I am free.”

Watson rose to fame with her hit single “Addictive” in 2002. She was signed to Dr. Dre’s Aftermath label, a subsidiary of Interscope Records. Watson says that despite the early success of the song and eventual album, she didn’t feel valued as an artist and sued her way out of her contract. As a result, she says she was blackballed.

“After filing suit to get out of my contract, Dre was really fair to me,” she tells ESSENCE. “He let me go easily because he knew I really wanted to go independent due to my career stalling under the deal I was under at that time.” She says a label executive wasn’t on the same page. They were reluctant to let her go after having not recouped the millions of dollars the label fronted to produce Watson’s Truthfully Speaking.

Following her departure from Aftermath, she says opportunities were blocked.

“[Labels] make sure you cannot secure and procure another situation with a label or a conglomerate that would pay for you to do anything,” Watson says. “They can be really greedy.” she adds.

With decades of working under his belt, James “Jimmy” Maynes, a former A&R executive with Jive, has gotten perspective from artists and record labels after playing a pivotal role in signing stars like Alicia Keys and Joe Thomas, among others.

Although he empathizes with record labels and knows they shell out cash to develop artists, he says he understands the plight of starving, undereducated artists as well.

“They should go independent if they want to break into the industry now,” he advises, adding that with social media, it’s easier than ever to self-market and distribute music, two of the main appeals of record labels.

“There’s money and talent in R&B, I don’t agree with Diddy when he said the genre is dead,” Maynes says. “We just have to help the new generation figure it out. But overall, they’ll be ok. The kids will be alright.”

Read “Never Too Much? A Look At Sexually Explicit R&B Lyrics” here.