Tyler Atkins grew up the hard way. His mother was out of the picture from the time he was four, and with his father also frequently absent, he was largely left to raise himself.

His childhood and early teens were defined, he says, by “making mistakes and being left at home and feeling sad and abandoned”. Now 36, the former model and clothing designer (and winner of the first season of The Amazing Race Australia) has told a version of his story in his debut feature film, Bosch & Rockit. 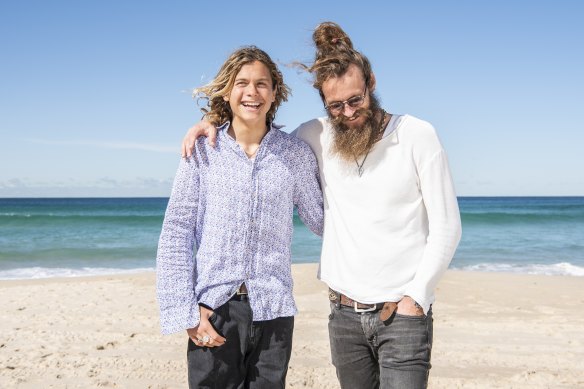 He’s “stayed true to as much as I could” of his actual experience, and he’s had some big-name help along the way, with Luke Hemsworth playing the father, Bosch, and Isabel Lucas a woman who briefly enters the scene and promises a brief glimpse of normality to the kid, Rockit. But to play his troubled, lost and alone 13-year-old self, he enlisted Rasmus King, a kid who had never acted, whose family life in Byron Bay was a picture of blissed-out love and support, and whose biggest concern appeared to be juggling pro surfing engagements with the occasional demands of home schooling.

Their childhood experiences were chalk and cheese, but what they undeniably had in common was the lure of the surf.

“My dad gave me surfing when I was quite young,” says Atkins. “Looking back at it now, I have deep gratitude because the ocean became my mother, and that’s where I’d go when my parents weren’t around. The one thing that saved my life was the ocean.”

For King, there’s barely a time when the ocean wasn’t his life. He was 17 months old when he first rode a wave, on the front of his father’s longboard. “I wasn’t even walking,” he says. “My dad was holding me up. I’ve got photos of me going down the face of a wave in a nappy, clapping.” 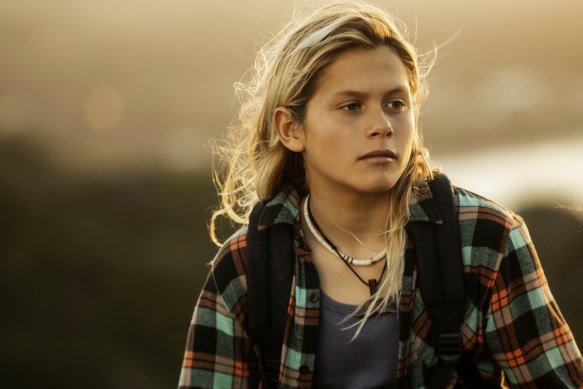 King as Rockit in Bosch & Rockit. He had just turned 15 when filming began.Credit:Madman

King landed his first sponsor when he was about six, and has been surfing professionally as long as he can remember, his father filming the exploits of him and his older brother (also a pro) around the world.

Now 17, he’s begun to rack up a few acting credits – Bosch & Rockit, his first, was followed by a small role in ABC drama series Barons, and he has the lead role in Daniel Johns’ autobiographical short film, What If The Future Never Happened?

“But before that, I was just surfing pretty much all day every day, at least twice a day for two or three hours each session,” he says. “I was definitely in the surf a lot more than I was at school, going on trips to Indonesia, America for three months of the year, Hawaii. I’ve got friends all over the world now. I love it.”

Are there any downsides to being a pro surfer from the age of six? “Not that I can think of.”

King was just 11 when Atkins met him. “It feels like an eternity ago now,” says King. “I was so tiny, I was literally a micro grommet.”

Atkins says: “I was like, ‘that is the kid’. I shot a camera test with him and he was just phenomenal. Rasmus is the kind of kid who doesn’t say anything, he just sits and watches, but to me that’s acting – the unspoken is everything.”

Though he’d found his all-important star, by the time Bosch & Rockit was ready for blast-off, King had just turned 15. Another year and he’d have been too old but, Atkins says, “that was the perfect age because you see the last of his innocence fading with what he goes through”.

They shot in chronological order, and you can see King grow slightly more mature, and taller, as the film progresses. You can also sense him learning how to act. “It’s a little clunky,” Atkins concedes of his star’s work in the earliest scenes. “And as a director, it’s the same. I started finding my voice.” 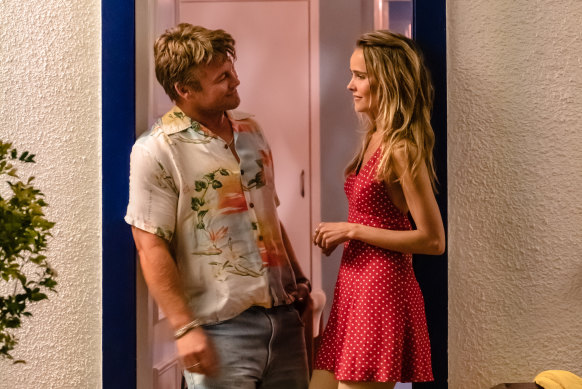 Luke Hemsworth as Bosch and Isabel Lucas as Deb in Bosch & Rockit.Credit:Madman

Ideally, he admits, they’d have tossed away those first few weeks’ footage and started again. “But we didn’t have that freedom.”

For all its rough edges, Bosch & Rockit is a powerful and moving film about a kid’s need and search for family. King really does grow in the role, and by the end of it you sense you may well be witnessing the birth of a star.

None of it would have happened, though, without Jamie Arscott, a Gold Coast-based car dealer who sold his house and pumped, he claims, about $6 million of his own money into a film that no screen agencies would back. 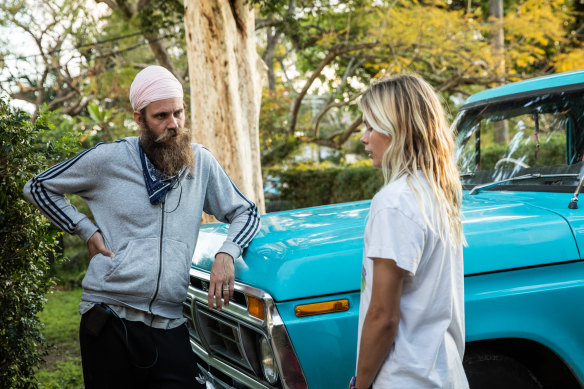 In fact, the only thing that put Bosch & Rockit on the radar outside the little community of its makers was this masthead’s report in October 2020 that Isabel Lucas had “opted out” of submitting to the COVID testing that was supposedly compulsory for all productions during lockdown.

But something in Atkins’ story spoke deeply to Arscott, and he backed the first-timer to the hilt. “Jamie’s one dream in life was that he wanted to make a movie,” says the director. “He came in and helped me like a father would do. He was tough, but he was also very loving and gave me free rein.”

As for his own parents, Atkins says he finally learnt to forgive them. “Tough as it was, it really did teach me to grow up young, and now I embrace that,” he says of his childhood.

His embrace of Sikhism helped with that, as did becoming a parent himself. “When I look back, I think it was such a positive in my life to have to wash my own clothes and to make dinner if my parents weren’t there,” he says. “There was a big blessing in that, when you can look at it from a different perspective.”

Bosch & Rockit is in cinemas now.