Australia’s Department of Defence has applied to relocate about 100 Australasian gannet chicks that hatched over summer on a platform in Port Phillip Bay but are too young to fly from the nest.

Defence wants to destroy the platform and relocate the chicks and some nest material about 50 metres across the water to nearby, smaller platform, but seabird experts have warned all the chicks will die of starvation if their parents can’t locate them. 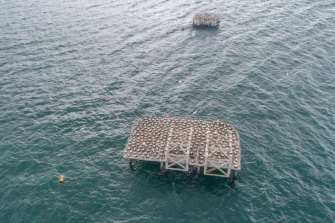 An image from Defence’s application document shows the platform to be removed – a section of wharf – in the foreground and a second platform where the gannet chicks would be relocated in the background. Both have gannets nesting on them.Credit:CBD contractors/awe.gov.au

Experts are calling on the Department of Defence to wait about another month, until all the nestlings have fledged. In its application to the federal Department of Agriculture, Water and the Environment (DAWE), Defence says waiting for the youngest birds to mature and leave the platform could delay the project by up to three months, at an estimated cost of $8 million.

The wharf at the Point Wilson Explosives Area is being upgraded so that it can be used for the transport of explosive materials, and the department says the gannets need to be relocated to minimise the impact of construction activities on them.

Birdlife Australia seabird expert Dr Eric Woehler said he expected none of the gannet nestlings would survive the relocation because gannet adults are colony-breeding birds that use sophisticated geographical visual cues to locate their nests.

Even if you only move them 50 metres, you may as well move them to a different planet.

“Even if you only move them 50 metres, you may as well move them to a different planet,” Dr Woehler said. “The adults are not going to find their nests because the visual cues they use to find them have gone. This suggestion shows a profound lack of ecological understanding.

“You can’t just pick up a colony and drop it onto another part of the landscape because the birds have locked onto that location.”

Australasian gannets are spectacular fishers, plunging into the ocean at high speed to hunt fish and squid that live near the surface. They are widely found throughout the southern and south-eastern coast of Australia and across to New Zealand, with sizable colonies at Lawrence Rocks near Portland, and Pope’s Eye and Wedge Light in Port Phillip near Melbourne.

Dr Woehler said he knew of an example in New South Wales where oystercatcher nests were relocated, but they were moved a metre at a time, so the birds could get used to the shift. 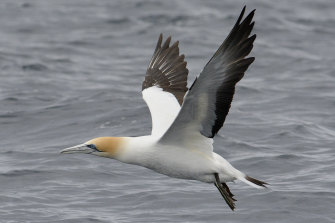 Defence has a different view of the relocation risks. In its application it says it expects the birds will adapt to their new location, saying they are exhibiting “mother-chick bond behaviour” and it did not expect the chicks would be abandoned during relocation.

If this did occur, it said the chicks would be captured and taken to the Werribee Zoo or a local wildlife carer for assessment. “Moderate” disturbance is expected when the nestling birds are captured for relocation, but any stress on their health and welfare would likely be short term, the department said in its application.

But even with controls in place, there are “high or very high” residual risks of bird stress during handling and bagging, bird attack during handling, death of bagged birds, abandonment of young birds and chicks falling off the new nesting site, the application says.

In a statement, a spokesperson for Defence said all reasonable steps would be taken to maximise the chances all gannet chicks would be relocated successfully. It has engaged experts to provide advice, detailed methodology and services to conduct the relocation of the chicks safely, ethically and responsibly, the department said.

Although Australasian gannets are not a threatened species, Jess Abrahams, nature campaigner for the Australian Conservation Foundation, said the destruction of their habitat should always be avoided.

“We’re making a choice to destroy the habitat of this unique and special creature when it’s clearly unnecessary. They can just wait a few weeks,” he said.

As a marine species listed under the Environment Protection and Biodiversity Conservation Act, Australasian gannets are afforded a level of protection under federal legislation and the government needs permission to relocate listed species.

Public comments on the application close on Monday 14 March.

A guide to the environment, what’s happening to it, what’s being done about it and what it means for the future. Sign up to our fortnightly Clear Air newsletter here.