It's a school night, but Hermitude are working to pump up a festival atmosphere. The duo, Luke Dubber (aka Luke Dubs) and Angus Stuart, are centre stage, surrounded by pillared lights.

"You're turning this Thursday night into a party," says Stuart.

The bass ricochets through the venue and hits every internal organ. Light from elaborate projected visuals – a writhing octopus, powerlines overhead, line-drawn wolves and drone vision – illuminates the mixed crowd at the Forum, who range from their early 20s to their 50s. 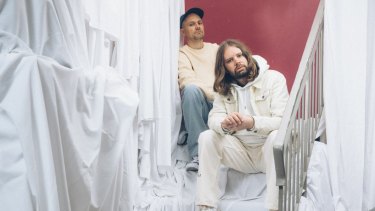 The two are internationally recognised as one of Australia's leading electronic acts. They have just released their latest album, Pollyanarchy, and are in the midst of an tour of Australia and New Zealand.

Their set is an homage to both old and new. It's a fresh crowd, with many hands shooting up in the air when Stuart asks who has never been to a Hermitude concert before.

The audience claps, dances and sways to Swerve, Hyperparadise, Northern Lights, Frayed and new release OneFourThree, as Stuart swaps between his decks and an electric drum kit and Dubs treats everyone to a keyboard solo.

Speak of the Devil results in a heady romp: mates are on their mates' shoulders, arms are flailing in the air.

For a rendition of ASAP Rocky's Praise the Lord, the pair strap their instruments to their necks for a dance, front of stage.

When guest singer Hoodlem bounces on stage for Every Day there's a palpable lift. They play "oldie but a goodie" Searchlight. Then support act Haiku Hands, who already won the crowd over opening for the duo, pounce back onto stage in open boiler suits for an electric Let it Burn.