Her Majesty’s love of creatures, great and small! Charming photographs capture how the Queen’s face lit up with animals

It’s no secret that Queen Elizabeth was a huge animal lover with her affection for her beloved corgis and horses notable.

Her Majesty’s passion for all-things equestrian is well-known around the world however it doesn’t stop there, as she also once owned a cow, given to her 1957 by the Royal Jersey Agricultural and Horticultural Society, and she was a regular visitor to the pigeon lofts at Sandringham.

The Queen, who has died aged 96, was Patron of over 30 animal charities from the RSPCA to The Red Poll Cattle Society and Battersea Dogs & Cats Home since 1956.

It is thought that the Queen has had at least 30 corgis throughout her 70-year reign.

Prince William has previously said that the Queen’s pets were the secret to keeping his grandmother happy, although he pointed out that they can be noisy.

In a 2012 TV interview: ‘I would definitely argue the sanity of all the corgis barking the whole time, I don’t know how she copes with it.’ 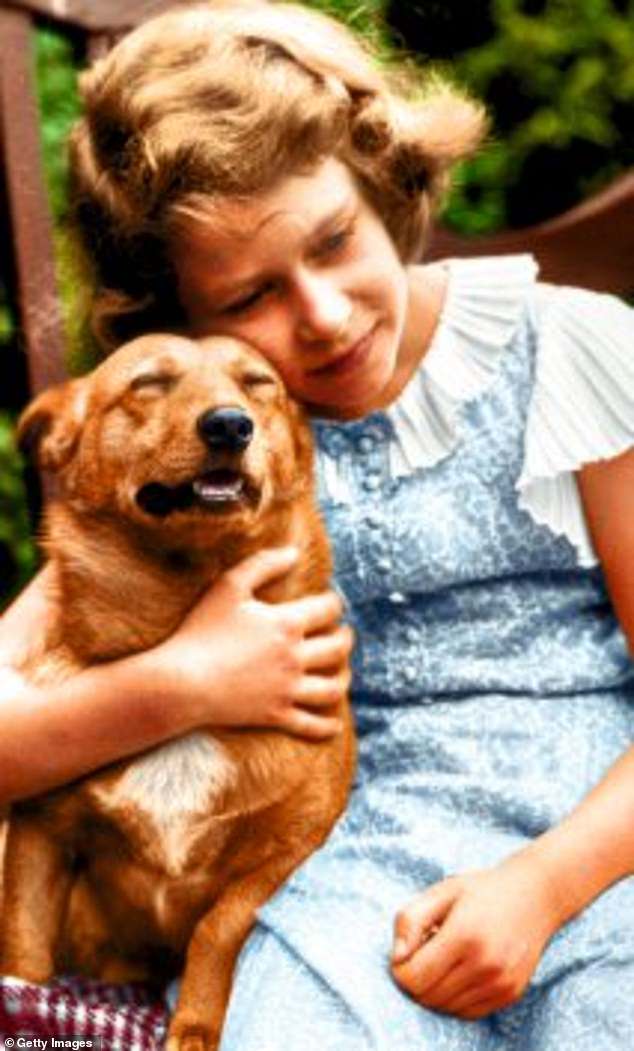 It’s no secret that Queen Elizabeth II was a huge animal lover with her affection for her beloved corgis and horses notable, it is thought that the Queen has had at least 30 corgis throughout her 70-year reign (pictured in 1936) 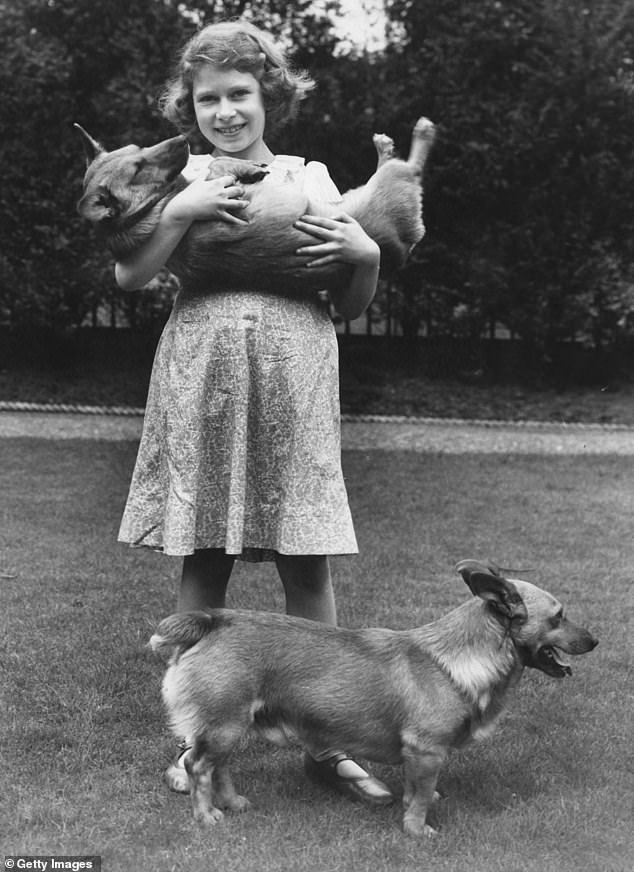 1936: A then Princess Elizabeth with her two beloved corgi dogs at her home at 145 Piccadilly, London. According to royal confidantes, the Queen preferred corgis to other dog breeds because of their energy and untamed spirit 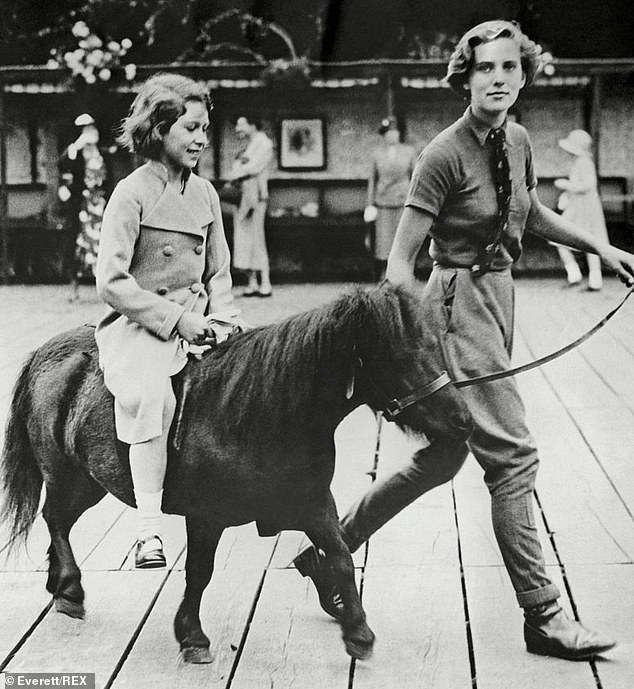 1937: When she was four years old, Elizabeth’s grandfather King George V gave her a little Shetland pony called Peggy, and she fell in love with riding. This photograph was taken a few years later when a lady-in-waiting took Princess Elizabeth and her younger sister Princess Margaret on a visit to Pets Corner at London Zoo 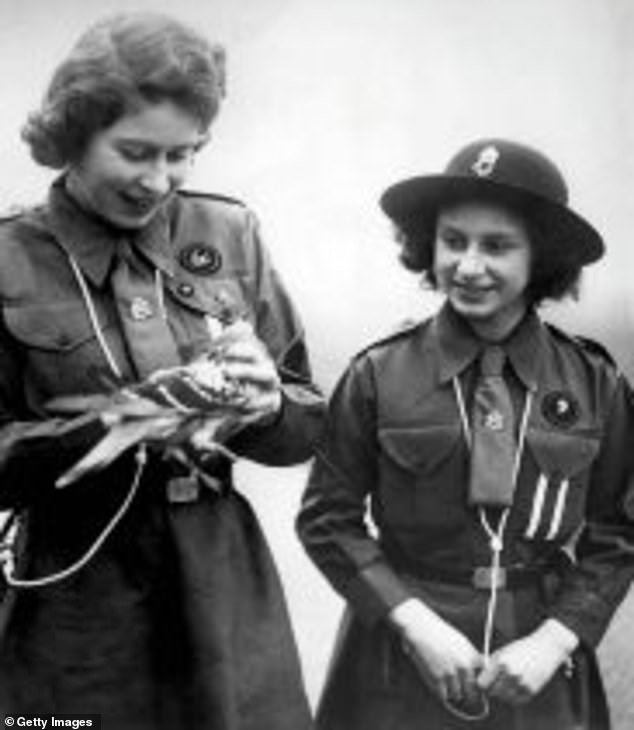 1943: The Queen takes her feathered (as well as four-legged) racing seriously and is a frequent visitor to the pigeon lofts at Sandringham. This wartime photo shows her as a Girl Guide, with Princess Margaret, preparing to release a pigeon with a message for World Chief Guide Lady Olave Baden-Powell 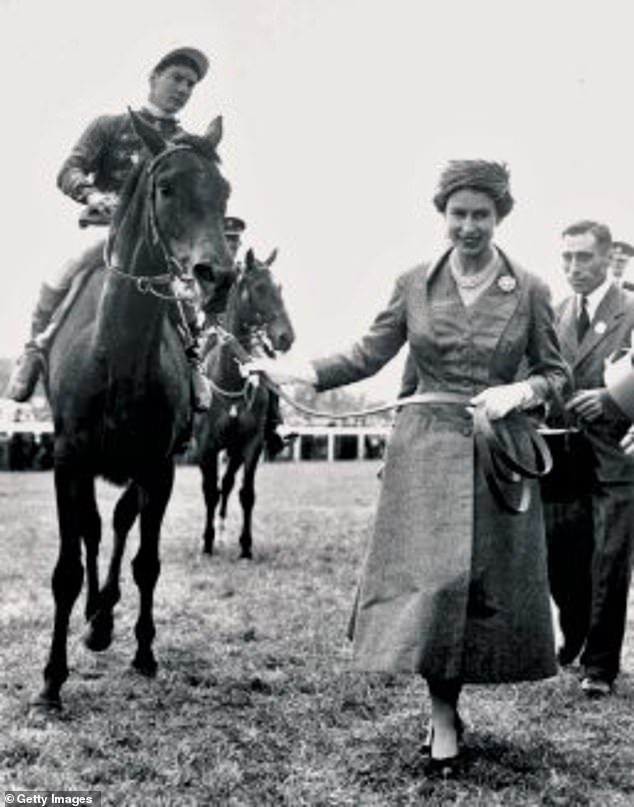 1957: Carrozza was Her Majesty’s first British Classic winner, when the filly won the Oaks at Epsom. The win helped the Queen to become champion owner in the 1957 flat season. She had her most successful racing year last year, with 33 winners, but a triumph in the Epsom Derby eludes her – though there is a chance she can achieve that this year on Platinum Jubilee weekend 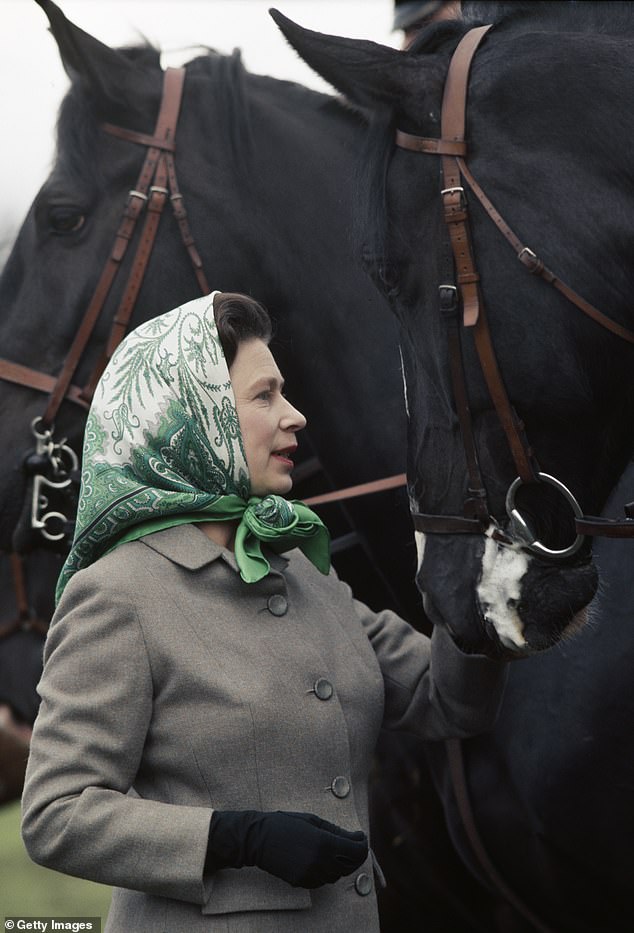 1968: The Queen is pictured in her element stroking a horse at the Royal Windsor Horse Show, in May in Berkshire 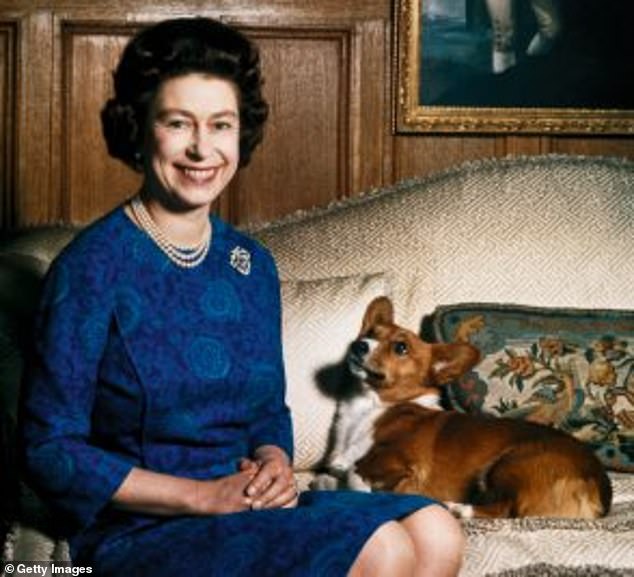 1970: Her Majesty’s love affair with corgis began when her father, the Duke of York, brought home one called Dookie in 1933. On her 18th birthday she was given a puppy called Susan, and for the next decade they were inseparable – Susan even joined her on her honeymoon. She has owned more than 30 corgis and currently has two corgis and a ‘dorgi’, a cross between a corgi and a dachshund. And until recently she has always fed and walked them herself 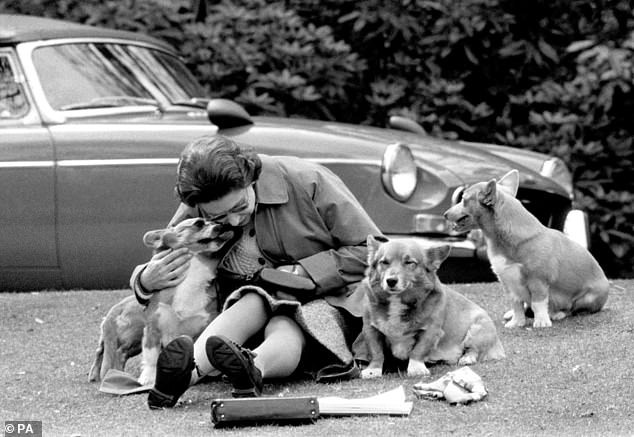 1973: Elizabeth sat on a grassy bank with the corgis at Virginia Water to watch competitors, including Prince Philip, in the Marathon of the European Driving Championship, part of the Royal Windsor Horse Show 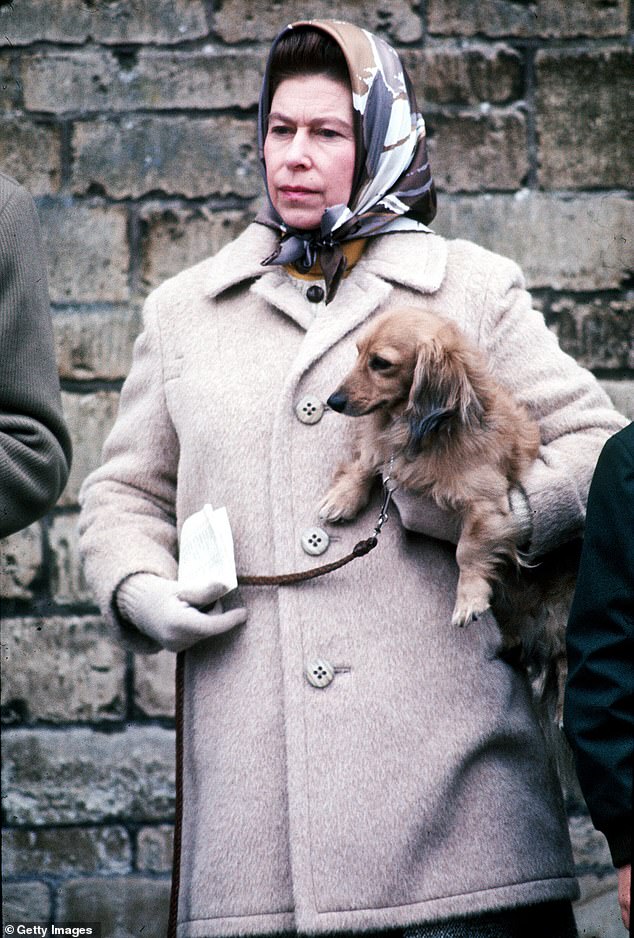 1976: Queen Elizabeth wrapped up warm with one of her favourite dogs at the Badminton Horse Trials 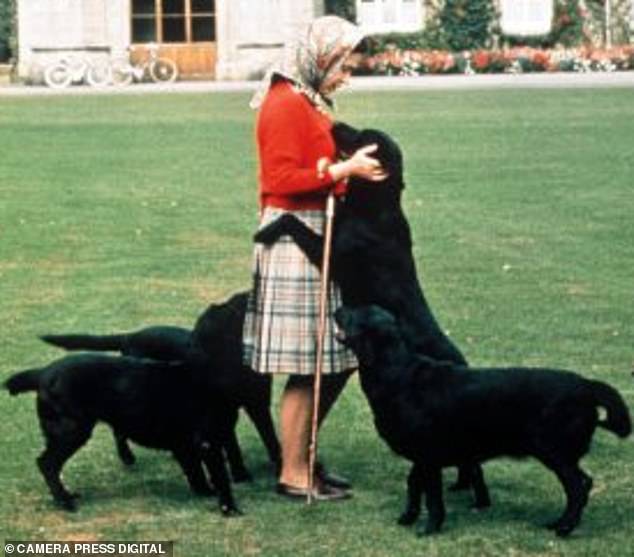 1977: The Queen also used to breed working Labradors. When she visited them (pictured at Balmoral) she liked to help train the dogs, which were used to fetch the birds brought down during shooting parties. In the 1970s the Queen impressed Bill Meldrum, former head-keeper at Sandringham, with her whistled commands to her dog Sherry, and when the dog returned carrying a bird from several hundred yards away, some 40 people applauded her. ‘If I’d known they were watching, I wouldn’t have attempted it,’ she said later 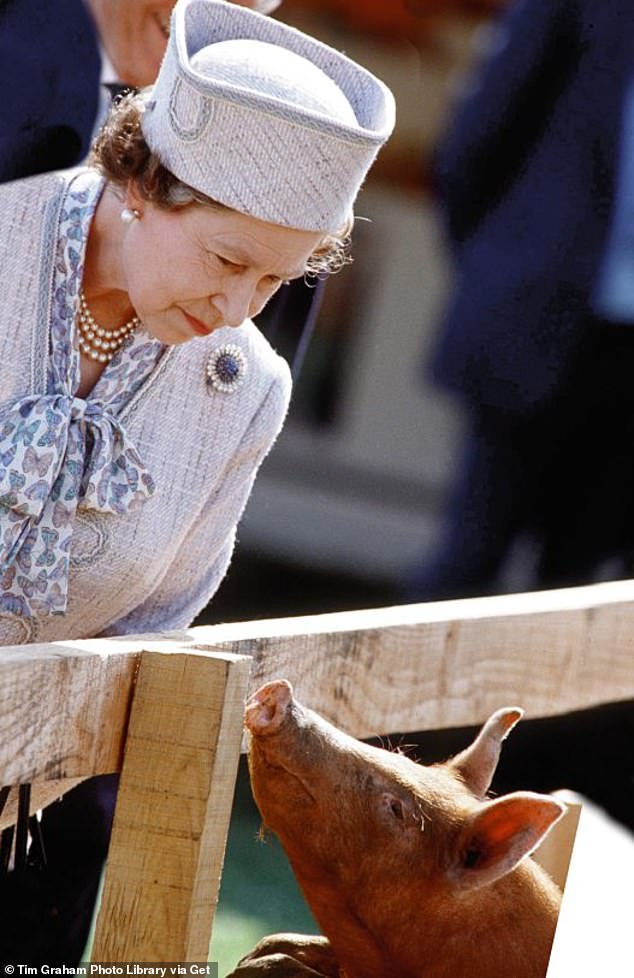 1989: When the Queen meets farmers, she takes great pleasure in engaging with their animals too. This little squealer seemed just as interested in meeting her when they came face to face at The Festival of Food and Farming in Hyde Park. An interest in pigs has passed on to her daughter – Princess Anne is currently patron of the Gloucestershire Old Spots Pig Breeders’ Club 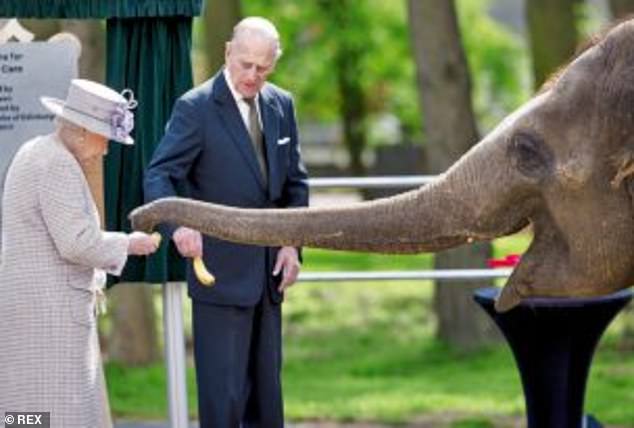 2017: One of the Queen and Prince Philip’s final joint engagements was at the opening of the Centre for Elephant Care at Whipsnade, home to a herd of endangered Asian elephants, including a baby given the name Elizabeth to celebrate Her Majesty’s 90th birthday in 2016. Philip had a lifelong interest in endangered species, and the royal couple clearly took great delight taking turns in feeding bananas to an elephant called Donna 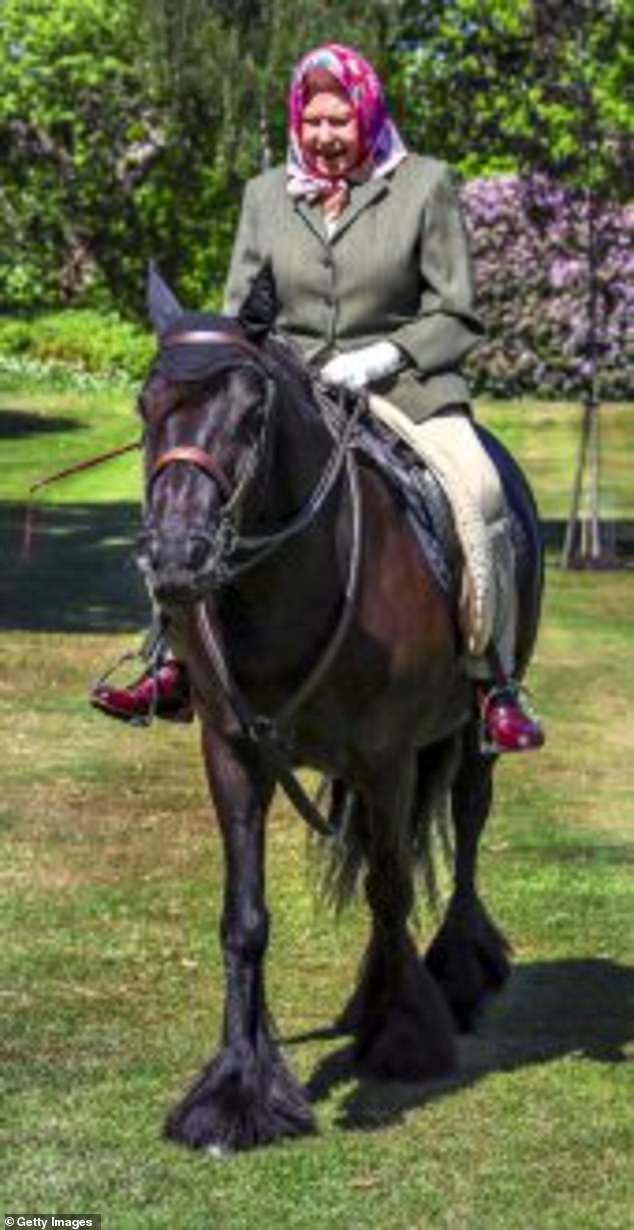 2020:This was the first time the Queen had been seen outside during lockdown, when she rode out on her 14-year- old fell pony Balmoral Fern in the private Windsor Home Park. She had been isolating at Windsor Castle, from where she’d made two televised addresses – her ‘We will meet again’ Coronavirus broadcast and a second on the 75th anniversary of VE Day 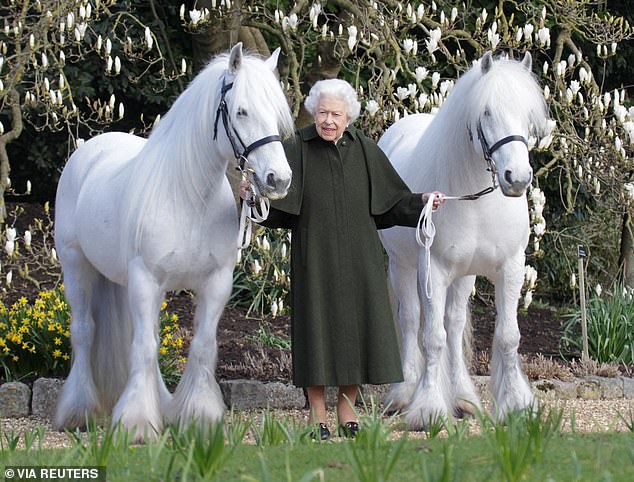 2022: The Queen celebrated her 96th Birthday with a photograph standing beside two of her favourite fell ponies, Bybeck Nightingale and Bybeck Katie. The photographer said the monarch was approachable and friendly during their photoshoot and that she remained on the grounds following the portrait session to spent time with her ponies