NAPLAN is sapping a generation of students of their capacity for creative writing, a study has found, with the national standardised test accused of rewarding those who produce formulaic writing and penalising creative expression.

A study of Australian secondary students’ imaginative writing skills has found NAPLAN has restricted how writing is taught in schools, favouring function but ignoring style and individual voice. 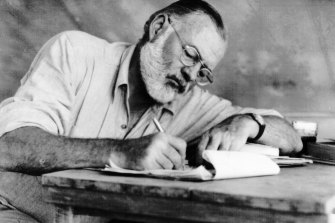 “NAPLAN rewards students who use lots of adjectives, who use long words instead of short ones,” study co-author Dr Shelley Davidow said.

“Authors like Ernest Hemingway and Raymond Carver would fail NAPLAN because they use minimalism and short words. In creative writing, less is more. In NAPLAN, more is more.”

As part of the study, 54 year 9 students at three Steiner schools embarked on a 10-week creative writing project, with each student producing a notebook of about 7000 words.

Students were assessed at the beginning and end of the 10 weeks on how well their writing adhered to a “gold standard minimalist” writing style – as practised by 20th century writers such as Ernest Hemingway, George Orwell and Raymond Carver – that emphasises clarity of expression and rigorous editing.

Their creative writing was judged on five factors, including whether the narrative held together; use of words, sentences and voice to support storytelling; whether the writing “hooks the reader”; and structural elements such as grammar, punctuation, spelling and paragraphing. They were also assessed on their writing skills according to NAPLAN.

Davidow, a senior education lecturer at the University of the Sunshine Coast, said students showed enormous improvement in their creative writing by the end of the project, and in their control of words for effect, “but there was actually no significant improvement according to NAPLAN in most of their criteria”.

A major review of NAPLAN, commissioned by three states (including Victoria) and completed in 2020, found the test “does not support students to produce excellent writing”, is not highly valued by teachers and “impacts negatively on how writing is taught in the classroom”.

“It was frequently mentioned that students produce formulaic writing for NAPLAN,” the study concluded. “It was also common throughout the consultations to hear that the writing test is having a negative impact on children’s and young people’s enjoyment of writing, their creativity and opportunities to express imagination in writing.”

“Significant changes were recently agreed by ministers to the national assessment program, including NAPLAN. In this context, the nature and timing of recommendations to ministers regarding further changes relating to writing is under active consideration,” he said.

The authority said the NAPLAN writing test focuses on the accurate, fluent and purposeful writing of either a narrative or persuasive text in standard Australian English. It assesses student performance against various criteria including vocabulary, ideas, character and setting.

The University of the Sunshine Coast study found that the influence of NAPLAN on teaching writing had “subsumed the development of imaginative capacity” in students.

“Some teachers, possibly due to a lack of knowledge of how to teach creative writing, have resorted to explicitly teaching-to-the-test with assistance from publishers and tutoring services that prepare students for NAPLAN,” it found.

“As a result, the current approach to narrative writing in Australian schools is narrow and reductive and does not assist students to use their imaginations to become innovative creative writers.”

The study was published in the Australian Journal of Language and Literacy. The research was commissioned by Steiner Education Australia.

“The research demonstrates that a rich ‘craft-based’ teaching practice allows students to connect with and be transported by their own ideas and narratives – an approach that underpins deep learning,” Moller said.

“Combine this knowledge with the neurological evidence that tells us that student engagement and learning is sub-optimal in stressful environments, and the case against our current NAPLAN-fuelled educational structures gathers steam.”