When Loretta King and Debra Nichols met three years ago, as volunteers at a Greensborough op shop, they “just clicked” and are now good friends.

In between serving customers, they chat about restaurants they’ve tried, or about their grandchildren. 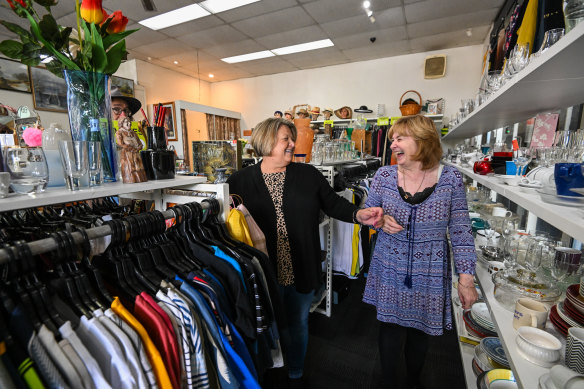 ‘We crack up’: Loretta King (left) and Debra Nichols volunteer at the Brotherhood of St Laurence op shop in Greensborough.Credit:Joe Armao

They laugh about reality TV shows they both watch, such as My Mum Your Dad and Married at First Sight. “We crack up. We say, ‘Did you see what that woman did? Oh dear’,” King said.

Even during COVID-19 lockdowns when the shop, run by the Brotherhood of St Laurence, was closed for months, King, 67, and Nichols, 65, met in a park to walk. Mostly they talked, said Nichols.

Their regular customers are also friends. “They feel comfortable enough to tell us their problems,” King said. “You’re almost a social worker.”

Nichols “never thought of not coming in” when op shops re-opened after COVID-19 lockdown closures.

But some charities have had dramatic drops in op shop staff numbers and are calling for more volunteers.

The volunteer workforce at the Brotherhood’s 23 op shops and online bookstore has fallen from 800 before COVID-19 to 650 now.

Sacred Heart Mission stores in Melbourne lost 50 per cent of their volunteers during the pandemic, and Salvos Stores dropped 30 per cent in Victoria.

‘[The customers] feel comfortable enough to tell us their problems.’

Brotherhood of St Laurence head of social enterprise Mark Lane said while none of the charity’s shops had closed, some now had one or two staff members per shift, compared with three or four previously.

Lane said many volunteers’ lives became “more complex” during the pandemic through changed family care arrangements, or they had found other interests.

Brotherhood op shops raise $9 million per year for over 60 welfare programs, and voluntary labour made a “significant difference” to the lives of the vulnerable, Lane said. 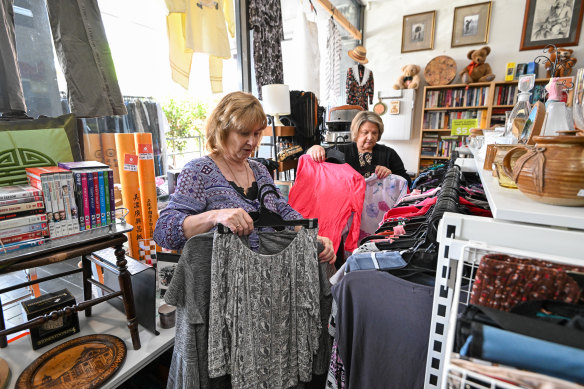 Wade Piva, the Sacred Heart Mission general manager of business development, said the number of volunteers in its 13 Melbourne op shops had dropped from about 600 before the pandemic to 300.

About 12 times this year, a store had to close for a day because of staff shortages.

The decline in volunteers was serious as it put pressure on existing staff to do the work and keep doors open, Piva said.

He said some volunteers were older and vulnerable to COVID-19, or their relatives were, and chose not to return. Some had reassessed their lives and moved interstate, or taken a big holiday.

Sacred Heart op shops raise about $10 million – about 25 per cent of the mission’s annual income.

If the drop in volunteers continued, Piva said, “we would put on more paid staff, which then has an impact on the money you’re raising. Or otherwise you have to look at closing locations, if there isn’t enough help.”

In an additional concern, the mission’s volunteer numbers dropped up to 30 per cent each summer school holiday period when people were away.

In January 2020, the animal welfare organisation had 454 volunteers in op shops, and by September 2022, that number had shrunk by more than half, to 197 volunteers.

Jane McIntosh, Salvos Stores executive manager of people, said the organisation had about 9000 volunteers nationally before the COVID-19 pandemic, and about 7300 now. The number of volunteers at its 117 Victorian stores had dropped by 30 per cent.

Closing stores would be a “last resort” and if needed, they would hire more paid workers to ensure outlets remained open. McIntosh called on “anyone who can do any amount of hours with us as a volunteer, to come in”.