The mother of an eight-year-old boy with severe autism has detailed her “exhausting” administrative battle for NDIS funding while recovering from an aggressive breast cancer as her son became physically aggressive.

Carly, a single mother who asked for her last name not to be used, has spent months fighting for a review of her National Disability Insurance Scheme plan to pay for help look after her disabled son while she recovers from invasive surgeries, chemotherapy and radiation treatment. 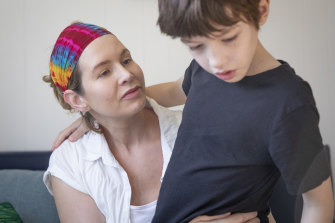 Carly wants to ensure other carers with life-threatening illnesses do not have to go through a stressful NDIS battle.Credit:Peter Stoop

Lincoln, who is non-verbal, had never been violent before her diagnosis but “his behaviour started to change when I got sick”.

“I’ve got upwards of 50 cuts and bruises on me … I’m just not mentally and emotionally able to deal with being physically attacked while I’m trying to fight for my life,” she said.

Carly was approved for NDIS funding for a support worker for just five hours a week to help her with Lincoln, despite being in hospital for a week following her initial surgery in July and multiple follow-up procedures, along with chemotherapy and radiation therapy.

“I’d be getting home from chemo to deal with a child kicking, scratching and biting me,” she said.

After using up most of the respite funding within her package for this year to ensure Lincoln could be cared for while she was undergoing treatment, Carly said, “now we’ve got no money left because they didn’t fund any day-to-day supports following the surgery”.

“They had all the documentation, but they just gave us five hours a week,” she said.

When Carly sought a review of this decision, she said she was ignored until she told the National Disability Insurance Agency that she was talking to federal Labor MP Meryl Swanson.

“They wouldn’t even call us back until they became aware of the media getting involved,” she said.

An NDIA internal review officer then advised that she must instead apply for a request for a change in circumstances and re-submit supporting documentation.

The agency finally promised to get the family the support they need after The Sydney Morning Herald and The Age began asking questions this week, but on Wednesday afternoon Carly was still waiting to find out how much support would be funded.

Shadow minister for NDIS and government services Bill Shorten said the handling of Carly’s case was “heartless bureaucracy at its shameful worst” and called on NDIS Minister Linda Reynolds to apologise.

“This brave woman has needed support for her son while battling cancer,” Mr Shorten said. “Not only were they refused their right to a review, but they were left to suffer while Carly was at her sickest.”

An NDIA spokesperson said the agency “recognises the exceptionally difficult health challenges that the family are facing” and would work with Carly to ensure her son received the disability-related daily supports he needs.

“Where a participant’s personal circumstances change, they, or their family, can submit a change of circumstances review request, to enable the NDIS to consider any additional funding and supports they may require,” the spokesperson said.

“It is also important to recognise there are a number of government and community services in place to assist families who have ongoing support needs for health conditions.”