Copy-Kate strikes again! Duke and Duchess of Cambridge’s ‘candid’ COP26 snap of them walking away from the camera mirrors ‘the Sussexes signature style’, expert claims

Kate Middleton and Prince William appear to be following in the footsteps of Prince Harry and Meghan Markle by releasing photographs in their trademark style walking away from the camera.

The Duke and Duchess of Cambridge, both 39, shared a behind-the-scenes shot as they arrived at the Clydeside Distillery to attend the Earthshot reception at Cop26 in Glasgow last night.

In the snap, the couple could be seen with their backs to the camera as they greeted guests while entering the event together.

The snap bears striking similarities to a style of shots which were often released by the Duke, 35, and Duchess of Sussex, 39, which saw them walking away from the camera.

It comes after Prince William and Kate last week drew comparisons to Prince Harry and Meghan by releasing photographs in black and white – and choosing to share their rare moments of public affection.

Brand expert Nick Ede predicted the public could expect to see ‘many more’ of these type of images from the Duke and Duchess of Cambridge, adding: ‘This behind the scenes almost candid image is one that we have associated with Meghan and Harrys most famous images. 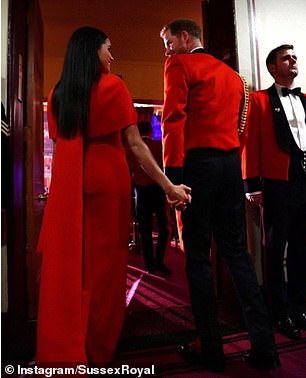 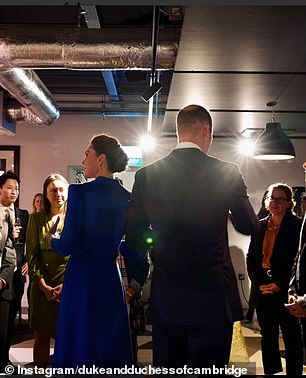 Kate Middleton and Prince William appear to be following in the footsteps of Prince Harry and Meghan Markle by releasing photographs in their trademark style walking away from the camera (pictured left, a photo shared by the Duke and Duchess of Sussex during their Megxit tour in March 2020, and right, the image released by the Cambridges last night)

‘The rawness of the image gives the viewer an intimate insight into the Cambridges and I think that as they are stepping up their brand and visibility. This is just a progression that will engage fans around the world.

‘We have seen behind-the-scenes shots from popstars coming off stage to actors taking a bow etc.

‘These are always candid moments that have an enduring appeal and bring a human touch to the image, which is something Meghan and Harry have done on numerous occasions.

‘This image creates a very strong narrative and I think we can expect many more of these types of images to be realeased in the future.’ 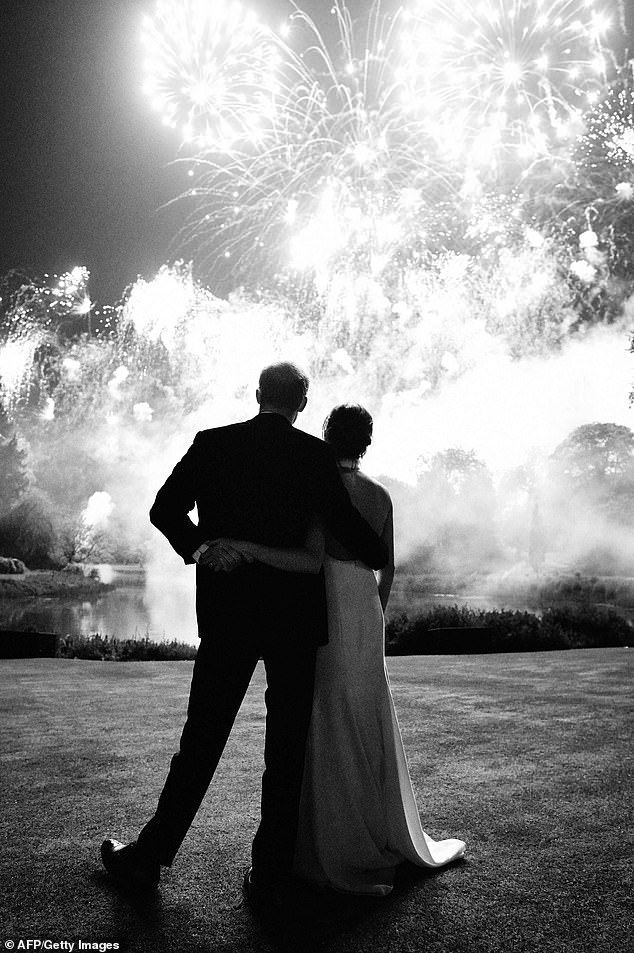 The couple made the style their signature at Christmas 2018 when they released their festive card, which featured a previously unseen snap from their wedding (pictured)

Last night, the Duke and Duchess of Cambridge shared photographs on Instagram as they walked into the evening reception in Glasgow.

In one of the snaps, the couple can be seen with their backs to the camera as they greet Earthshot prize winners at the distillery.

It bears striking similarity to a series of photographs shared by Harry and Meghan during their time as working royals.

The couple made the style their signature at Christmas 2018 when they released their festive card.

It featured a previously unseen wedding snap as they stood with their backs to the camera and watched fireworks erupt over the grounds of Frogmore House, Windsor, where their evening reception was held. 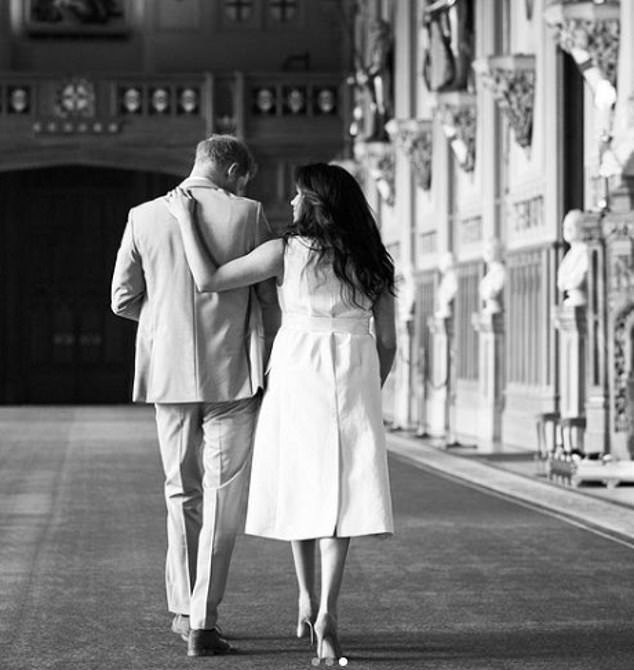 Throughout their time as working royals, the Duke and Duchess of Sussex often released photographs as they walked away from the camera on their social media (pictured, at Archie’s photocall)

The photograph was captured by Chris Allerton hours after the couple tied the knot at St George’s Chapel.

They went on to share further snaps in a similar pose on their @SussexRoyal Instagram page, including one image from their son Archie’s photocall.

Meanwhile they also posted another snap in a near-identical pose as they attended the annual Mountbatten Festival of Music at the Royal Albert Hall in March 2020 during their Megxit tour.

Last week, royal photographer Chris Jackson, who is married to The Duchess of Cambridge’s stylist and close friend Natasha Archer, 34, took to Instagram and explained how he captured a series of behind-the-scene pictures from the Earthshot Prize Awards on Sunday at Alexandra Palace in London.

Among the black and white images, which were shared to the Duke and Duchess of Cambridge’s social media account, include the moment Kate put a loving hand on Prince William’s lower back in a rare display of public affection – as they are captured looking intensely in each other’s eyes and smiling at one another.

The couple have always acknowledged the Queen’s wishes for royal family members to avoid loved-up displays in public.

However, photographer previously Glenn Gratton told FEMAIL the Duchess of Sussex is putting her own stamp on royal photos by releasing them in black and white.

It comes after Meghan, 40, and Harry, 37, have plumped for black and white pictures on a number of important occasions, including their official engagement shoot and their first Christmas card. 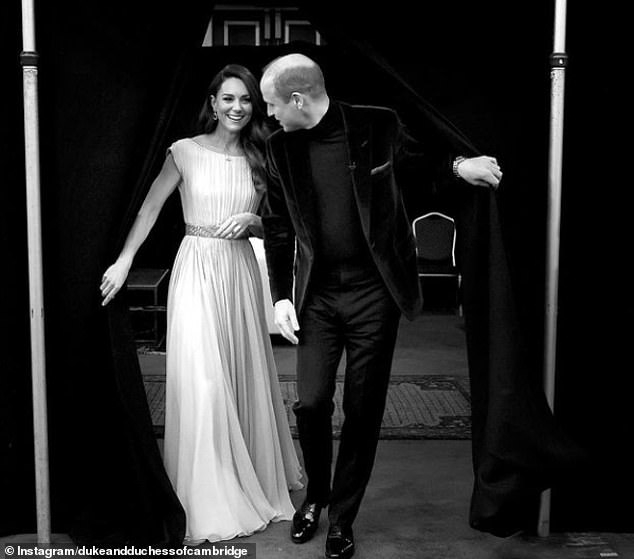 In another adorable photograph from last week’s engagement, a dapper dressed Prince William pulls back the curtain as he and Kate are seen smiling and laughing together.

Elsewhere, two poignant individual shots of the pair show them both reflecting before they’re about to go on stage on give their speeches on the importance of looking after the environment for several generations to come.

Alongside the series of snaps, Chris penned: ‘Some of you may have noticed I was a little quiet after the Earthshot awards…

‘This was because I had a fantastic opportunity to shoot “behind the scenes” with the Duke and Duchess of Cambridge and the groundbreaking environmental initiative that will do a huge amount to change the narrative over the next few years.’ 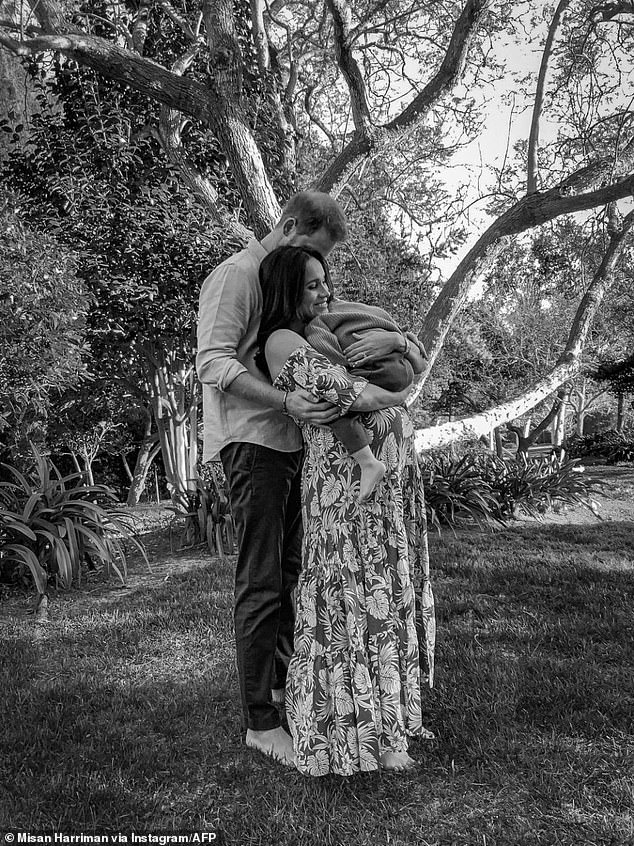 Prince William and Kate appear to have followed in the footsteps of Prince Harry, 37, and Meghan Markle, 40, with the latest snaps shared behind-the-scenes at the Earthshot Prize. Pictured, posing in the grounds of their $14 million Californian mansion in front of a ‘tree of life’ 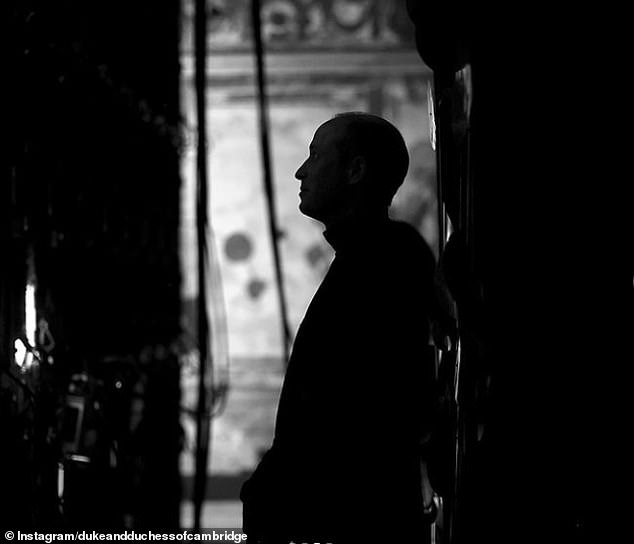 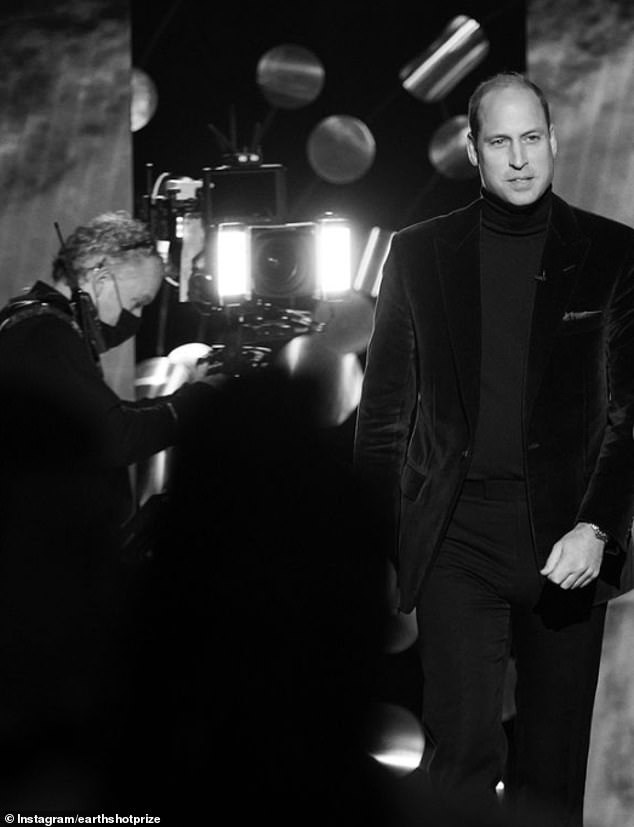 In another powerful snap, Prince William, can be seen stepping on stage after ditching his usual black tuxedo for a trendy polo neck and green velvet jacket

‘It was special to witness the passion and energy that went into this event from close quarters and performances from talented artists such as @teddysphotos @ksi and @coldplay.

‘I think these pictures illustrate some the depth of feeling throughout the event.’

However, the choice of the monochrome snaps comes after Prince Harry and Meghan chose two black and white family photos to announce Meghan’s pregnancy with Lilibet, where the royal couple can be seen posing in the grounds of their $14 million Californian mansion in front of a ‘tree of life.’

They also opted for the same style to announce their son’s name on Instagram in May 2019, and released a further two from the photocall at Windsor Castle earlier the same day. 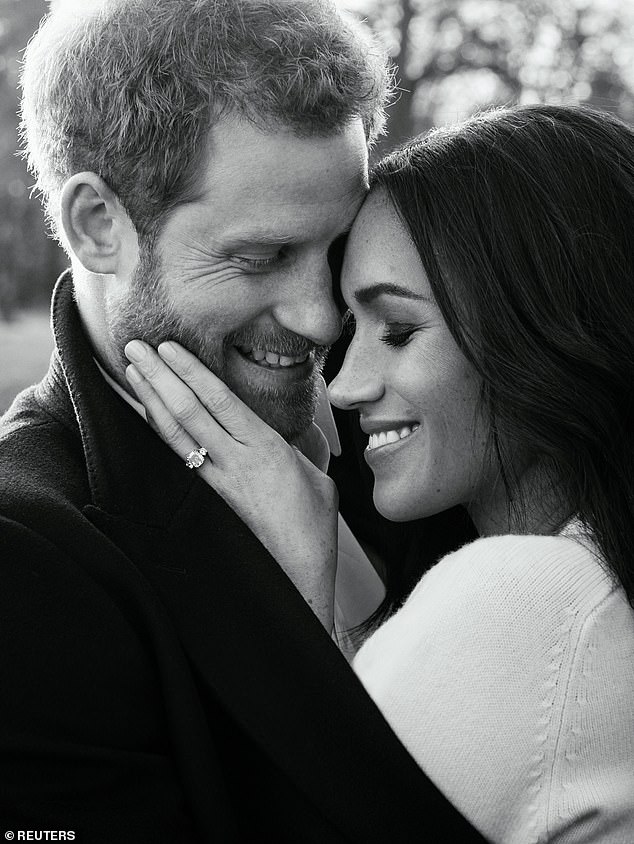 The snaps, taken by Alexi Lubomirski, captured the couple looking loved-up in the grounds near their now-home Frogmore Cottage, in Windsor. Pictured, one of the engagement photos

Speaking to Femail, photographer Glenn Gratton said Meghan is ‘image conscious’ and would have carefully thought through which photos to release of her son to make the best impression.

He added black and white is ‘in vogue’ and is a way for the royal mother to distance her photos from the high contrast, filtered photos that flood social media feeds.

The Duke and Duchess of Sussex made a statement when they released two of the three official engagement photos in black and white.

The snaps, taken by Alexi Lubomirski, captured the couple looking loved-up in the grounds near their now-home Frogmore Cottage, in Windsor.

Harry and Meghan also opted to have some black and white photos on their wedding day, later choosing one of them standing with their backs to the camera as their first Christmas card.

Speaking to The Sun, Duncan said: ‘William and Kate are quite clear they need to do more to sell themselves as a couple, family and personalities.