For 78 successive days, Victorian Premier Daniel Andrews has stood before massed journalists, microphones and cameras, usually for more than an hour at a time.

Hundreds of thousands, sometimes millions, of Victorians have tuned in, riding COVID-19’s wave as Andrews intoned the numbers: the dead, the new cases, the active cases. 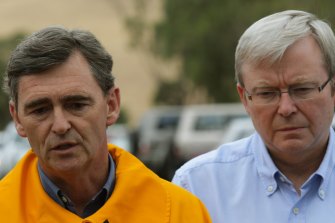 “Every crisis is different,” says John Brumby. “The one thing that is constant is that people expect you to lead.

“I imagine it is a bit like being in the front line of a war, and every day you try to inch forward, another inch and another inch, believing there is light at the end of the tunnel."

Brumby was premier when Victoria exploded into flame on Black Saturday – February 7, 2009. For the next three months he spent every day in the fire zone while also planning Victoria’s longer-term recovery from the disaster.

Andrews, he says, has met all the critical elements for leading through crisis: the requirement to communicate clearly, to share as much information as possible, to be available to the public, to have a clear plan, to display agile decision-making and to show empathy for those suffering.

“He has made unthinkably tough decisions and he has withstood unbelievable pressures to roll over on those measures.

“He has remained very clear that it is about protecting the welfare of the public health and hospital systems, and the long-term welfare of Victorians.”

Brumby says Victorians only need to look at the United States unravelling, a second wave spiralling out of control in Britain and Europe, India suffering and Israel imposing a harsh curfew to recognise the value of Andrews’ approach.

“I believe that when people look back, knowing how incredibly tough it was and how there was so much anger and disappointment, they will recognise that at the end of the day, we will have emerged into a better position than just about any other place in the world,” he says. 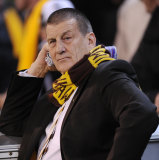 “The legacy of Daniel Andrews’ government is going to be deaths, social and economic destruction and debt,” says Jeff Kennett.

“I am not commenting personally or politically. I actually liked Daniel Andrews on the few occasions we have been together.

“My comments are a reflection of what I feel has happened to Melbourne and the state I and my colleagues had to rebuild in the 1990s. It became a thriving city and state, with Melbourne successively voted the most liveable city in the world.

“But now it is a shadow and a shell of its former self.”

Kennett blames “monumental hubris” for the Andrews government's failure to take advice on how to run a hotel quarantine system, which in turn allowed COVID-19 to spread into the aged care system.

The result was unnecessary destruction of the economy and businesses, enormous social pain among families and individuals and ballooning debt.

“You talk of Daniel Andrews going out in front of the media every day, but he wouldn’t have needed to go out every day if he wasn’t such a control freak, hadn't refused to take good advice and hadn’t stuffed up everything,” Kennett says.

"I have never seen anyone more disrespectful of the Westminster system. If I had done anything like this, you in the Press would have ripped me to shreds.

“I’ll mark him one out of 10 because I think he can spell his own name.” 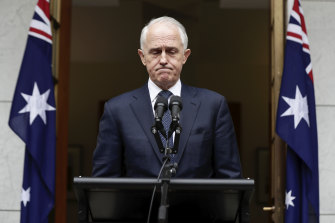 Malcolm Turnbull says he will not criticise Andrews’ current approach to the crisis in Victoria.

On Andrews’ decision to appear for daily media conferences, Turnbull says one of the central principles of crisis management was to keep citizens informed.

“When you are faced with any form of crisis, you have to build confidence,” he says. “Keeping the public informed is 101 of crisis management.

“You need to deliver as much information as possible and not talk gobbledigook. Having all the facts and figures out there is very important.

“But should Mr Andrews be taking it upon himself to do it by himself every day?

“Having led a government, I can tell you that the daily pressures on any leader are very great.

“The truth is, no one is at their best when they are dog-tired.

“I wonder, with the benefit of hindsight, if Mr Andrews would choose this approach again.” 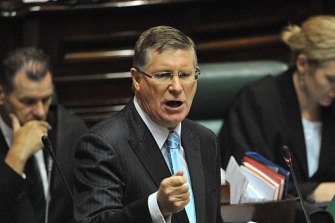 Denis Napthine in Victorian Parliament at the height of the Geoff Shaw controversy.Credit:Joe Armao

“Daniel Andrews gets no sympathy from me,” says Denis Napthine. “We see evidence every day of the total and utter blundering and mismanagement that led us here.

“My view is that, tragically, Daniel Andrews and his team totally mismanaged hotel quarantine and contact tracing, inflicting disaster on Victoria’s community, its economy, its businesses, and costing hundreds of lives.”

Napthine, who studied epidemiology for his Masters in Veterinary Science at Melbourne University, says he had been alarmed from the start when he discovered “bouncers” were being used to guard travellers in hotel quarantine.

“They chose completely the wrong people for a vital biosecurity role,” he says.

Napthine recognises that Andrews has displayed persistence in his daily media conferences, but says that did not count against the gravity of the original mistakes.

“It’s a bit like an arsonist, having lit the fire, seeking praise for trying to put it out,” he adds. 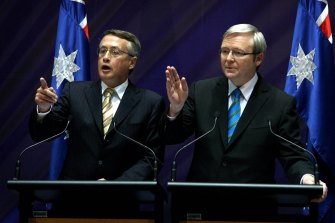 Kevin Rudd (right) and his treasurer Wayne Swan at the height of the Global Financial Crisis in 2008.Credit:Glen McCurtayne

Andrews should devote time each day to listening to good music and reading books that have nothing to do with the current crisis, according to former prime minister Kevin Rudd.

“When you are under great pressure, you need to unwind with people you love and trust, and refresh yourself with good reading and good music.

“During the 2007 election campaign, I read the histories of the American Revolution. During the Global Financial Crisis, I turned to the history of the Tudors.”

Rudd finds no fault with Andrews’ decision to put himself at the centre of the COVID-19 crisis strategy every day.

“I’d give the guy eight of 10 for his performance, maybe a bit better than that,” he says. “I ask myself the question: what would I do if I was him?

“I don’t think, given the gravity of the challenge, that he could absent himself from the field.

“On the first day he did, he’d most likely come in for attack.

“Right now, of course, you have Daniel Andrews unfairly attacked for choosing a strategy of locking down the city of Melbourne.

“But none of those doing the attacking are asking what the consequences would be of abandoning the lockdown and allowing the virus to spread unchecked.”

Rudd says that when he was prime minister during the Global Financial Crisis, he learned how difficult it was to have confidence in the accuracy of data being provided by others.

“You can have all the confidence in yourself, but the real anxiety is how accurate is the data you receive from others and the advice you are getting."

Ted Baillieu recognises that Andrews has expended significant energy during the crisis, but if he were counselling the Premier he would advise him to take a step back. 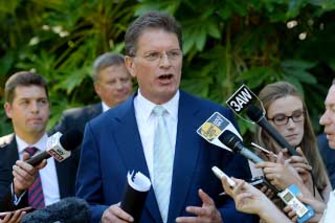 Ted Baillieu at the end of his premiership in March 2013.Credit:Pat Scala

Baillieu says he does not believe it is helpful for a former leader to personally criticise a Premier in the midst of a crisis.

But he believes the biggest crisis for Andrews and the state of Victoria lies ahead.

The reduction in COVID-19 cases is likely to lead to what might be perceived in the short term as a success, Baillieu says. But beyond that there is likely to be a crippling economic disaster that will last much longer than Victoria’s lockdowns.

“Even though the failures in coronavirus quarantine and contact tracing in Victoria have already led to the greatest public policy disaster we have seen, even bigger mistakes may be made as the extent of the economic disaster unfolds,” he says.

Baillieu says although Andrews had obviously made the decision to carry the weight of the crisis and to wear “all of the flak”, he should become more inclusive during the coming economic crisis.

“We can’t change the past, but the more bipartisan he can make the future, the better we will all be,” Baillieu says.

“He needs to address the growing lack of trust and confidence in the state. When things go wrong in a disaster, you need to change the message, or the policies, or the people involved.

“But Daniel has elected not to change anything of significance.”