‘Greedy’ landlord is slammed for charging £950-a-month for ‘furnished two bedroom flat’ in Glasgow with ‘damp’ on the walls, a bin balancing on the fridge and no bed (and that doesn’t include bills)

Social media users have slammed a landlord for renting a property for £950-per-month after noticing discrepancies between the online description and photographs taken of the ‘furnished two-bed flat.’

Cameron Hastings, from Glasgow, took to Twitter after spotting shocking snaps of the property, located in the trendy Finnieston area, on online letting agency Open Rent, which is listed for £950 – excluding bills.

Two photos of the kitchen, which have gone viral, show a dreary space with drawers appearing to be missing from the cabinets, what seemed to be ‘damp’ on one wall and a bin balanced on top of the fridge.

Another snap shows one of the bedrooms with no bed or storage space – despite the property being advertised as having new furniture. Instead, one corner of the room is filled with clutter, including two uninstalled sinks and boxes. 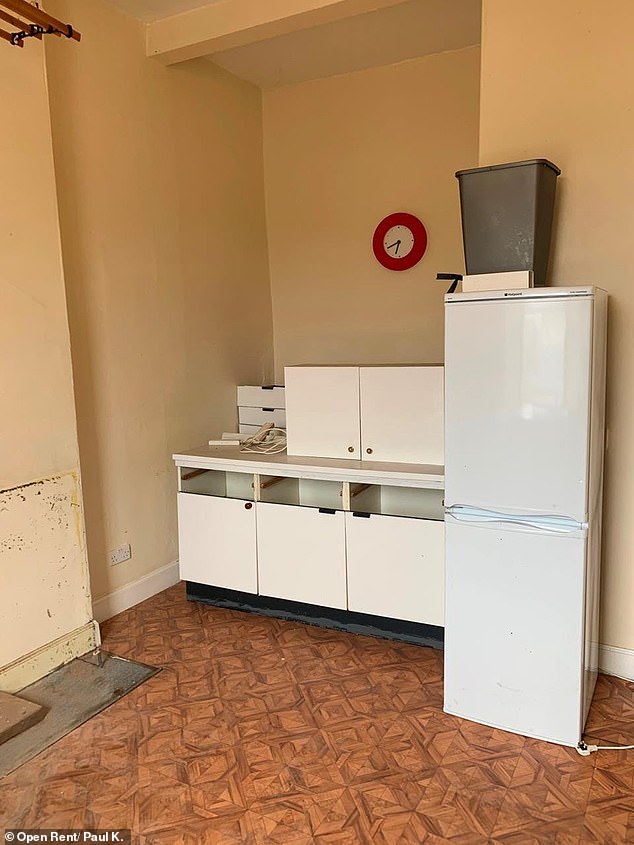 Cameron Hastings, from Glasgow, Scotland, took to Twitter after spotting shocking snaps of the property, located in Glasgow, on online letting agency Open Rent , which is listed for £950 – excluding bills 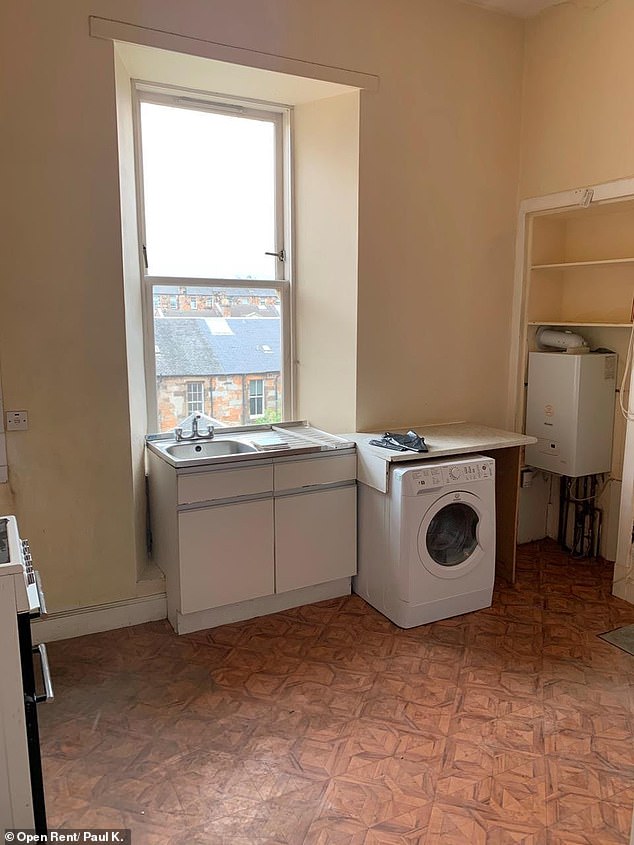 Photographs of the kitchen (pictured) shows the absence of a kettle, toaster and a microwave

An outraged Cameron brought the property to the attention of others by tweeting: ‘This flat is £950 a month and this is the kitchen. Landlords need to be stopped.’

The post has since garnered over 400 comments and 14,000 likes, with many social media users blasting both its appearance and the asking price.

‘There are minimum standards,’ wrote one. ‘It just needs to be reported. There should be hard wired smoke alarms in main areas and heat detector in the kitchen.

‘Gas safety cert, modern electricals and wirings. Decor isn’t covered in things but should be no dampness leading to mould etc.’

A second commented: ‘At £950/ month I seriously doubt it. Just another greedy landlord in a country with not enough homes.’ 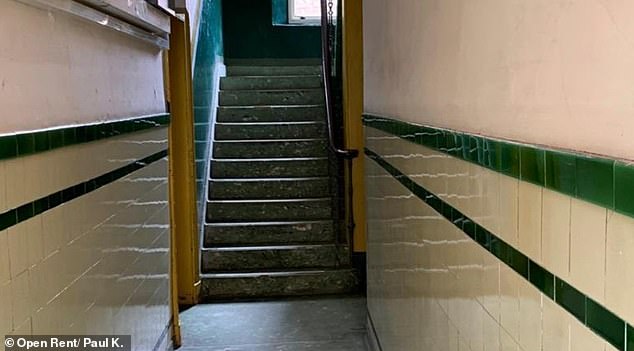 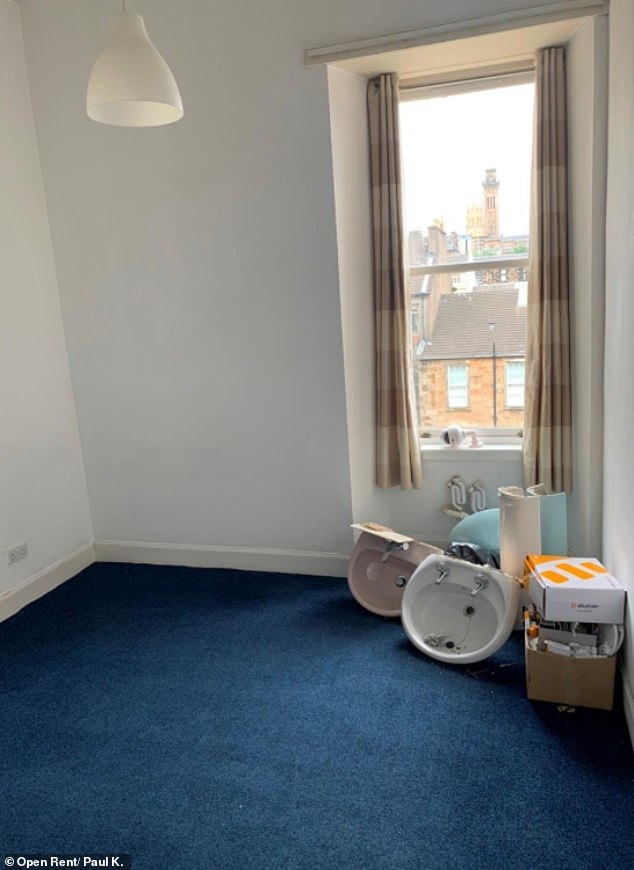 A photograph of one of the bedrooms suggests the landlord isn’t providing a bed or storage equipment for tenants, while sinks and boxes can be seen pushed into a corner

A third added: ‘That in a picture, is why we need strict rent controls, price caps and stricter regulations on landlords.’

In stark contrast to the snaps, the description of the property online reads: ‘A traditional top floor flat comprising of a large hall with fantastic storage facilities, two double sized bedrooms, lounge, kitchen and a spacious bathroom!

‘HMO application in progress and once granted (12 months), then the property will comprise of four bedrooms, kitchen/dining area, bathroom.

‘If tenants still occupy flat during HMO application then a rent increase notice will be served to reflect the change in status of the property.’

The information confirms in such an instance, the tenant will be given three month’s notice of the landlord’s plan to raise the rent to £1850 – £1900 per month.

A photograph of the bathroom shows a modern space, however it’s unclear if it has a sink or bathroom cabinet 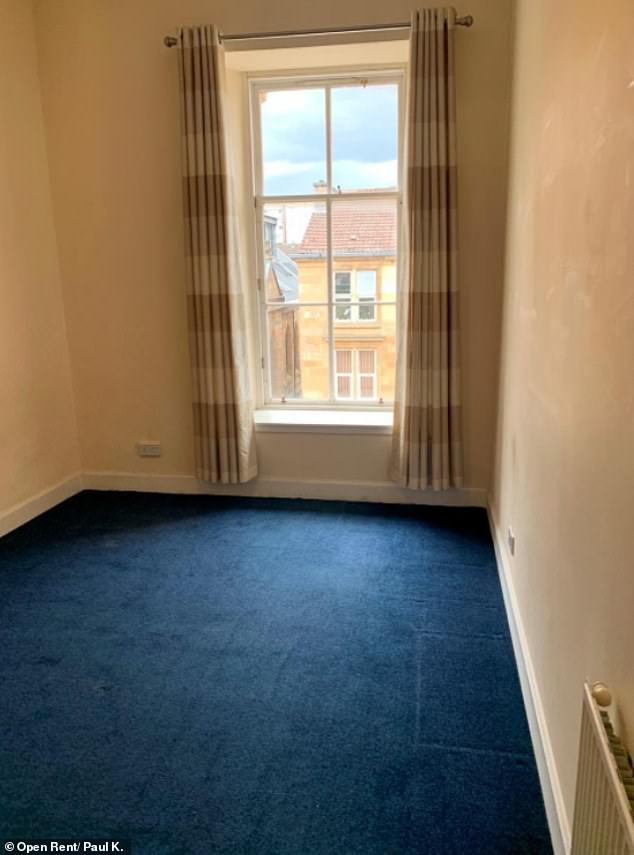 The landlord informed the future tenant that their rent is likely to double once their HMO application is approved. Pictured, one of the empty bedrooms

The landlord, who is located in Charing Cross, also boasts online that the property is in a safe and quiet residential area with a variety of shops and transport links within walking distance.

It also has a communal outdoor space and street parking which tenants can pay for.

According to the description, it has a recently installed kitchen, new furniture and has been redecorated throughout.

New tenants are required to hand over a deposit of £1500 and the first month’s rent of £950 before moving in.

Elsewhere, further photographs reveal the entrance to the property is via a narrow staircase, suggesting that there isn’t a lift despite it being on the top floor.

The snaps of the bathroom show no sign of a sink or storage cabinet, while a photo of the bedroom shows a small space without any furniture and a few unknown marks on the walls.