In an abstract, cubist setting, the patches of paint organise themselves into life and a woman with red-blonde hair and big sea-green eyes emerges, a dash of pink on her lips.

“Miss M Roberts” is a stunner. But who is she? 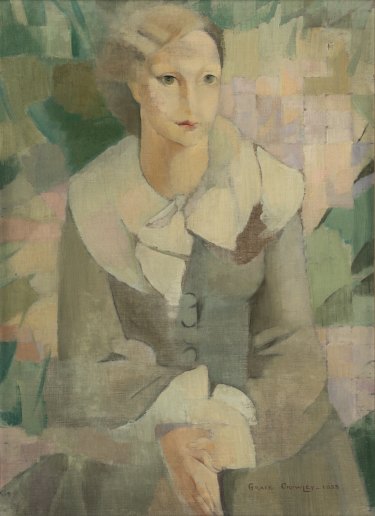 Curator Natalie Wilson had to have this 1933 painting by Grace Crowley for this year’s Archie 100 exhibition, which celebrates a century of the country’s biggest portrait prize. It represented a pivotal moment for an important artist. But there was a problem: she couldn’t identify the subject.

“My goal was to tell the story of every sitter in all 100 portraits in the display,” says Wilson. “But no amount of research into the work of the artist offered an answer.”

It was the last of the 100 to resist Wilson, an Agatha Christie buff who loves nothing more than a good art whodunit (or in this case, whowasitdunof). She was stumped. The University of Sydney, who owned the painting, had no clue. There was no helpful inscription on the work, back or front. 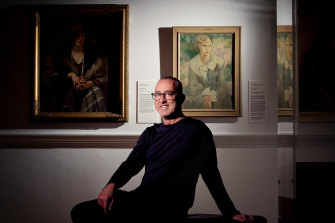 “I had really resigned myself to the fact I would probably never know who Miss M Roberts was,” she says.

Then a few weeks ago she bought the catalogue of a 2014 Dorrit Black exhibition in South Australia, and spotted a drawing of a seated woman with downcast eyes: unremarkable except for the title “Miss Roberts” and the date “circa 1933”. 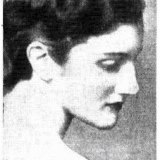 Wilson put her dad – the family historian, an absolute whiz at Ancestry.com – on the case and he found, on the 1933 Commonwealth electoral roll, a Marjorie Marie Roberts, who noted her profession as artist’s model.

“It was jumping up and down going ‘bingo’, basically,” says Wilson.

Marjorie Marie Patricia Roberts, born near Auckland in 1912, the third of six children, comes from lively Australian stock. Her grandfather, Sydney banker Melnotte Roberts, fought the Boxer Rebellion in Peking for the naval artillery volunteers in 1900, and was a founder of Manly Surf Life Saving Club.

Her great-grandfather, Charles Roberts, owned a number of Sydney pubs including the Crown and Anchor, which was on the corner of George and Market streets. There’s a portrait of Charles in the National Portrait Gallery. 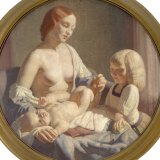 Marjorie’s sister Pamela Meyers, now 100 years old (and, coincidentally, the grandmother of a former colleague of Wilson’s), told Wilson of their lives at home with their parents in the worst years of the Depression. Marjorie, a young beauty, worked as a hostess for the Liberty Theatre and the proprietors put her out the front dressed as screen heroines to attract customers.

There, it seems likely, on Pitt Street just two blocks from Dorrit Black’s Modern Art Centre, she was spotted by the artists for whom she would later model: Crowley, Black, and also Archibald winner Arthur Murch. 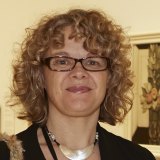 It turned out there was another portrait of Marjorie: the well-known Murch painting The Idle Hour, of a topless woman relaxing with her family, that has hung on Art Gallery of NSW walls since 1933.

Marjorie quit modelling (her mother didn’t approve) and married a respectable, rugby union-playing police constable named Rex Larnach-Jones. The surname led Wilson to Mary Larnach-Jones, Marjorie’s daughter-in-law. An artist herself with a long career including several unsuccessful Archibald submissions, now exhibiting from her studio in the Macedon Ranges north of Melbourne, it was Mary who revealed the Murch portrait connection.

“It’s such a lovely story,” says Wilson. “The whole research project of Archie 100 has been one big mystery hunt… and there are many more stories to be told.”

The painting is now on display at Geelong Gallery, where the Archie 100 is on tour.

“Somehow this portrait’s already-quietly-commanding presence is amplified through the fascinating biographical detail we now know of Marjorie, and what was clearly her own love of art and modern life.”

Archie 100: A Century of the Archibald Prize is at Geelong Gallery until February 20.