Memphis, Tennessee: To members of the public, Lisa Marie Presley was best known as the daughter of one of the world’s biggest stars. To family and friends, she was a doting mother, a caring friend and a woman who persevered through a life that for all its glamour was punctuated too often by grief.

Under slate-grey skies in Memphis, loved ones and admirers – along with crowds that flanked a tent set up at the entrance of Graceland – paid tribute Sunday (Monday AEDT) during a memorial service for Presley, the singer-songwriter and only child of Elvis Presley who died January 12 in Los Angeles at 54. The exact cause of death has not been determined by the Los Angeles County coroner. 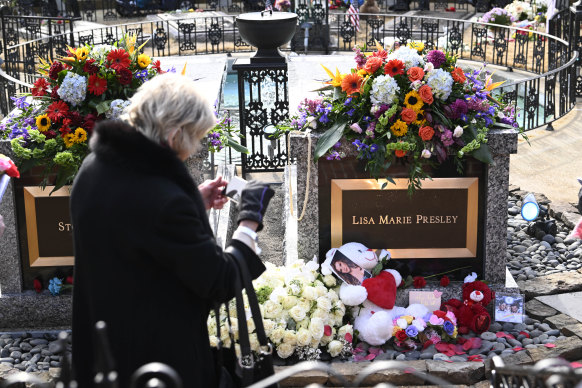 A visitor stops to take a photo of the grave site after a memorial service for Lisa Marie Presley.Credit:AP

In Memphis, Lisa Marie Presley was “the city’s precious jewel every day of her life,” said AC Wharton Jr, the city’s former mayor. And noting the “peaks and valleys” of her often tragic life, he lauded her for “the sheer force of will it took Lisa to keep climbing.”

The program for the service reflected Presley’s stature as rock royalty and included performances by her friends Alanis Morissette and the Smashing Pumpkins’ Billy Corgan, as well as by the Tennessee Mass Choir and the Blackwood Brothers’ Quartet, a southern gospel institution revered by Elvis Presley that also performed at his funeral.

Baz Luhrmann, the director of the 2022 biopic Elvis attended the ceremony with his wife, designer Catherine Martin. He and Lisa Marie Presley appeared together on January 10 at the Golden Globes, where Austin Butler’s portrayal of Elvis won him the award for best actor in a motion picture drama.

Sarah Ferguson, the Duchess of York, who said she called Presley “sissie,” gave a eulogy, and Presley’s mother, Priscilla, read a poem by one of her granddaughters. 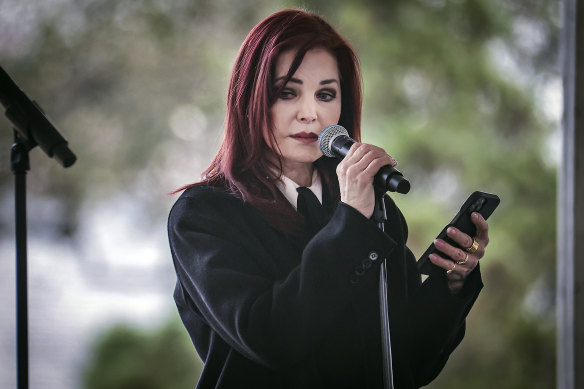 Priscilla Presley speaks during a memorial service for her daughter, Lisa Marie Presley, at Graceland.Credit:Patrick Lantrip/Daily Memphian via AP

Later, a letter by Riley Keough, Presley’s oldest daughter, was read aloud by Keough’s husband, Ben Smith-Petersen. “I hope you finally know how much you were loved here,” she wrote.

Presley was famous from the moment she was born to the man known as the king of rock ‘n’ roll, who transformed American music in the 1950s. But she had a tumultuous life. She lost her father when she was 9 and he was 42. Her son, Benjamin Keough, died by suicide in 2020 at 27. Presley married and divorced four times – she was married to Michael Jackson from 1994 to 1996 – and she struggled with an opioid addiction.

Less than five months before her death, she wrote in an essay in People magazine that Keough’s loss had “destroyed” her but that she had kept going for the sake of her three daughters: Riley Keough, 33, and Finley and Harper Lockwood, 14-year-old twins.

“With Ben’s passing, Lisa’s life and the rest of her family and his loved ones’, took a turn down a hard road that she was honoring to the best of her ability, seeking out help and choosing to help others who experienced such a loss and pain,” said the Guns N’ Roses frontman, Axl Rose, before a solo performance of November Rain.

The livestreamed public memorial at Graceland, Elvis Presley’s eclectic eight-bedroom home that became a museum in 1982, was a reflection of how important Lisa Marie Presley’s fans have been to the family and how much Graceland meant to her, according to David Beckwith, a spokesperson for Elvis Presley Enterprises.

Presley was interred last week in a private funeral at Graceland’s cemetery – next to her father; her grandparents, Vernon and Gladys Presley; her great-grandmother, Minnie Mae Presley; and her son, Benjamin Keough.

A procession took place for fans after the memorial so that they could view Lisa Marie Presley’s headstone, where they were invited to leave flowers or other offerings. 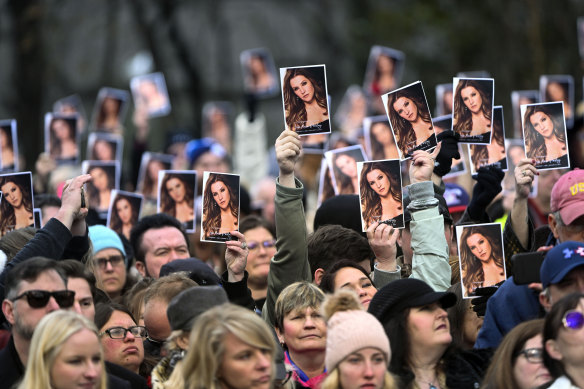 Visitors hold up photos as a service for Lisa Marie Presley comes to an end.Credit:AP Photo/John Amis

As the service ended, Barbara Hawkins, who drove nine hours from Houston with three other self-described Elvis fanatics, stood in line to visit Presley’s grave.

“She was our last real link to Elvis by blood,” said Hawkins, a jewel-encrusted Elvis pendant hanging from her hat. “She just felt like family to us Elvis people, and we’re just shocked that she’s gone too soon.”

Although Presley spent most of her life in California, where she enjoyed the status of a major celebrity but struggled to distinguish herself as a star in her own right, she maintained ties to her hometown with frequent visits to Graceland, her childhood home. Her most recent visit was this month, for a four-day celebration of what would have been Elvis Presley’s 88th birthday.

For Presley’s memorial service, Graceland’s 450-room hotel, a separate property on its grounds, sold out “immediately,” said Kevin Kane, the CEO of Memphis Tourism, and hotels near the museum and Beale Street, where musicians such as Elvis Presley and B.B. King recorded, were “seeing an uptick in last-minute reservations for the weekend.” 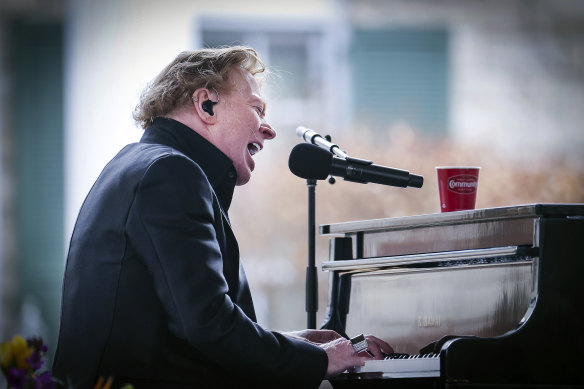 “Elvis and his family brought a lot to Memphis — a lot of notoriety, a lot of goodwill,” he said.

Graceland staff members had become accustomed to welcoming fans and mourners since Elvis Presley’s death in August 1977. That evening, more than 1,000 people kept vigil outside Graceland. Solemnity turned into panic when fans tried to charge the gates of the mansion and the cemetery.

Two women were killed and one was critically injured after a car plowed into a crowd of mourners in the early morning.

The next day, the gathering turned more carnivalesque, with hawkers selling Elvis memorabilia as a procession of politicians and celebrities, including singer James Brown, came to pay their respects.

Observing his death at Graceland is now a weeklong event that includes a candlelight vigil on August 15.

Lisa Marie Presley’s three surviving children will inherit the estate, including the Graceland mansion “and all artifacts and everything inside of it,” Beckwith said.

Because Presley’s twin daughters are minors, “Riley will be the one in charge” of the trust, he added. “There will be no changes at Graceland or the operations; it will just continue on as it is now.” 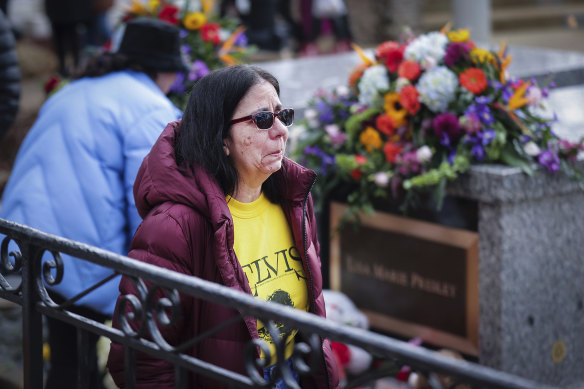 A mourner at Lisa Marie Presley’s service in Memphis.Credit:Patrick Lantrip/Daily Memphian via AP

Presley’s personal net worth was not clear. As Elvis Presley’s sole heir, she inherited her father’s estate in 1993 after the deaths of Vernon Presley and Minnie Mae Presley, according to court records in 2018.

The blockbuster Elvis may have boosted the star’s holdings — including Graceland, a song catalog and a merchandise and licensing business — to a billion-dollar valuation. But not all of the assets remained with Presley, who sold off chunks of the business to investors over the years.

At the service Sunday, however, the Presley fortune was likely not on people’s minds. The family’s history of heartbreak was.

In the essay she wrote for People, Presley said: “Death is part of life whether we like it or not — and so is grieving.”