Prime Minister Scott Morrison is giving almost $250 million to four universities to commercialise new high-tech innovations as part of a plan to boost the economic recovery from the coronavirus pandemic.

Funding worth up to $50 million each over four years to June 2026 will be provided to selected universities to help them become research and development leaders, Mr Morrison said at a Business Council of Australia event on Wednesday afternoon. He said the funding, which will include at least one regional university, would help show the sector the benefits of focusing on commercialisation and working closely with industry. 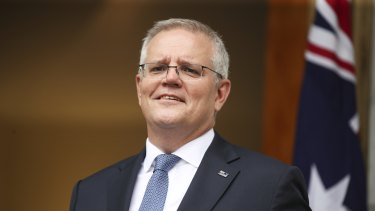 “We need our universities to play a bigger role in our economy, working hand-in-glove with Australian businesses to develop the next generation of great Australian products and companies,” Mr Morrison said.

“They are a giant economic asset of our country which generations of Australians have invested billions [into] and I want to see that put to work to realise this next stage of our economic recovery.”

Universities have been crying out for more research funding after the coronavirus pandemic slashed international student numbers. Fees from foreign students have provided the bulk of research funding, leading the federal government to announce a $1 billion emergency fund in 2020 to tide academic institutions over while borders were closed. But no further funding was announced in this year’s budget, prompting vice-chancellors to warn that Australia was at risk of losing critical research capacity that would take decades to recover.

The $243.5 million will go towards research and development projects including staff, equipment and other opportunities to work closely with the business sector as part of a plan to commercialise universities. Mr Morrison said this was the “first phase” of the plan.

He said there were a range of barriers to greater commercialisation, including a “publish or perish” mindset within academic ranks.

“Researchers are currently incentivised to publish and have their work cited as often as possible … useful for getting tenure but does little to spur innovation or create start-ups,” he said.

Mr Morrison said the government would seek out “trailblazer” universities that are early adopters of intellectual property, industrial relations and skills practices to help increase the amount of collaboration and commercialisation. He also wants better alignment of the skills industries need with the courses provided at universities.

“We’re going to work with those who are going to make this happen,” he said, adding that businesses needed to recognise the value of research.

In particular, medical products, food and beverages, recycling and clean energy, resources technology and critical minerals processing, and defence and space are the six areas where he said Australia has a particular advantage and will be prioritised.

“The focus is on universities working with industry partners to drive commercialisation across [these areas],” he said.