Forget pasta chips! Home cook makes penne KEBABS on a stick in a tasty new foodie trend on the rise

A home cook has made ‘pasta kebabs’ in the latest food trend – and she insisted her creation tasted just like pizza.

Mum Shereen Chadoud, from Sydney, shared a TikTok video showing how she made the pasta on a stick topped with cheese, olives, capsicum and zucchini.

To make the cheesy snack, she simply cooked the penne paste until al dente and created her own sauce with hidden vegetables. 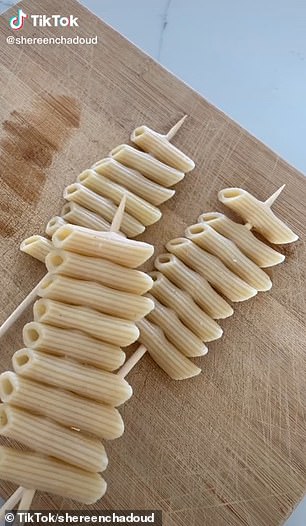 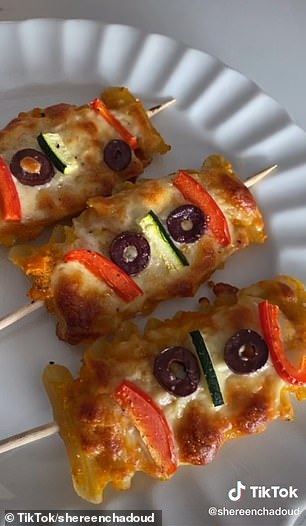 ‘I made a paste with pumpkin, sweet potatoes, carrots, zucchini, onion and garlic seasoned with Vegeta stock powder,’ she said.

Next, she thread the pasta onto the skewers and brushed her sauce over the top.

The mum then topped each skewer with cheese, olives, capsicum and zucchini.

‘I put it in the oven on the grill setting until golden,’ she said.

Shereen said her pasta on a stick was inspired by a Swiss food blogger, known only as Heart Beat Food, who has more than 765,000 followers on TikTok.

‘Could this be the next food trend? Inspired by @heartbeatfood with my own twist… ‘It tastes like pizza… so good,’ the mum wrote.

Her video has since been viewed more than 60,000 times, with many saying they couldn’t wait to give it a go.

‘This is so smart,’ one woman wrote, while another said: ‘That looks so good.’

Other parents said their children would enjoy eating the pasta on a stick while others pointed out it was perfect for fussy kids because they’re hidden with veggies.