A nurse who caught COVID-19 while working in a coronavirus ward at Epping Private Hospital also worked two shifts at the nearby Northern Hospital while infectious, prompting Victoria’s COVID-19 response commander to say he was “exceptionally concerned and disappointed” the nurse was allowed to work at more than one site.

While Victoria recorded no new COVID-19 infections on Thursday, the third “doughnut day” in the past week, NSW’s outbreak grew to three or possibly four cases. 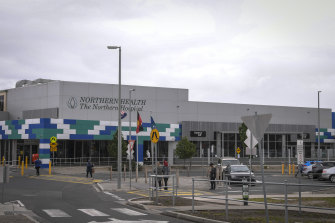 A nurse worked two shifts at the Northern Hospital while infectious with COVID-19.Credit:Eddie Jim

In the first recent instance of community transmission in NSW, the third case – a woman in her 70s – visited a cafe in Sydney’s eastern suburbs at the same time as the positive case at the centre of the cluster, a driver who transported international aircrew and that tested positive on Wednesday.

NSW Premier Gladys Berejiklian has not imposed additional restrictions, but warned residents of Sydney’s east to be on high alert, wear masks indoors and avoid gatherings.

The new cases in Sydney have prompted Victorian health authorities to designate parts of the city orange zones under the state’s travel permit system. Chief Health Officer Brett Sutton said on Thursday evening that Victorians intending to visit the local government areas of the City of Sydney, Waverley and Woollahra should rethink their plans.

Queensland has banned people living in Greater Melbourne from entering for another seven days after the hotspot declaration for the city was extended.

After a survey conducted for The Age and The Sydney Morning Herald found voter support for the Victorian government had dropped on the back of its handling of the pandemic, acting Premier James Merlino palmed off questions about the government’s popularity on Thursday.

“I am absolutely not focused on those matters … it’s of no interest to me, any individual polls,” he told reporters.

As Victoria takes its next step out of lockdown restrictions at 11.59pm, almost 26,000 tests contributed to Thursday’s zero new infections – an increase of about 50 per cent on the day before.

COVID response commander Jeroen Weimar said state authorities had run several of the state’s recent outbreaks to ground, with 90 per cent of primary contacts in the Port Melbourne, West Melbourne and City of Whittlesea clusters all now cleared of carrying the virus.

“We really are very much in the last knockings of those particular outbreaks,” he said.

Mr Weimar was, however, critical of Epping Private and Northern hospitals for allowing the nurse to work across sites due to a rostering “operational error” and confirmed he had spoken with the chief executives of both services.

The nurse was treating three residents of Arcare Maidstone aged care centre at Epping Private this week – the only three Victorians currently in hospital with COVID-19.

Mr Weimar refused to reveal which part of the Northern Hospital the nurse had worked in on June 11 and 12 but said five patients and 22 staff have been identified as primary close contacts, along with 25 staff at Epping Private and 30 people from Northern Health’s vaccination clinic that the nurse visited on June 14.

“It should not have been allowed to happen,” Mr Weimar said of the nurse’s work across two sites, a key problem in aged care throughout the pandemic. “I think the team at Epping Private recognise that and recognise the severity of that and are responding appropriately.”

The survey by Resolve Political Monitor found that while the Andrews government’s primary vote dropped six percentage points to 37 per cent since the November 2018 election, the Coalition’s vote has risen one percentage point to 36 per cent, taking the opposition neck-and-neck with Labor.

After The Age revealed a group of federal Liberal MPs have been discussing a plan to oust Michael O’Brien as Victorian leader, Mr O’Brien insisted on Thursday that he had not lost the support of federal colleagues.

Mr O’Brien defended his leadership style, which detractors in the party say has failed to cut through even in Premier Daniel Andrews’ three-month injury absence.

“ I don’t worry about political pundits in Melbourne, I get out there and I speak to real Victorians who need help,” Mr O’Brien said from Traralgon, where wild weather has lashed the area.

“It’s my job as opposition leader to stoke the fire to try and get some action out of the government so that people can get looked after. That’s my style. I’m going to keep doing that.”

The survey also discovered a five percentage point swing towards independent parties in Victoria. Greens leader Samantha Ratnam, whose party won three lower-house seats at the last election, said it was clear the Andrews government hadn’t always got it right during the pandemic.

“During the recent lockdown renters and casual workers were left high and dry. We were disappointed the government didn’t reactivate its rent relief grants and a moratorium on evictions to protect renters from financial stress or the risk of losing their home,” she said.

In NSW, the fourth suspected case on Thursday was a man in his 40s from Sydney’s north-west who returned a weak positive, with health authorities further analysing the result.

The limousine driver who transports aircrew and his wife tested positive to the Delta variant on Wednesday.

NSW’s Chief Health Officer Kerry Chant said the “working hypothesis” was he was infected by a US aircrew member who did not test positive in Australia and whose viral sequence information may be difficult to retrieve if it has been collected abroad.

Police are separately investigating the driver because his positive saliva test, returned on Tuesday, was his first COVID-19 test on NSW Health’s records from its daily testing program. It is not yet known how long he has worked with international aircrew.

Stay across the most crucial developments related to the pandemic with the Coronavirus Update. Sign up to receive the weekly newsletter.